In January 1992, the Air Force Memorial Foundation was incorporated to pursue the development of a memorial that would honor the people in the United States Air Force. In December 1993, President William Clinton signed Pub.L. 103–163 authorizing the Air Force Memorial. In 1994, the National Capital Memorial Advisory Commission approved a site adjacent to Marshall Drive and State Route 110, down the hill from the Netherlands Carillon, known as Arlington Ridge. Fundraising and detailed designs began.

Because the site was near the Marine Corps War Memorial, which is just north of the Carillon, various Marine groups were briefed on the plans without voicing objections. However, on 30 July 1997, Congressman Gerald B.H. Solomon (R-NY), a Marine veteran, introduced a bill to prohibit the construction of any monument, memorial or other structure "within view" of the Marine Corps War Memorial. The Air Force Association organized support for the memorial on behalf of its membership and Air Force veterans, and the issue became a polarizing one between the services.

On 16 September 1997, the Friends of Iwo Jima and Solomon filed for a Temporary Restraining Order against the construction of the Air Force Memorial, which was dismissed on 15 June 1998. The U.S. Court of Appeals for the Fourth Circuit then dismissed the appeal of that decision on 7 May 1999. Faced with the cost of litigation and the opposition of prominent Marine veterans in Congress, the Foundation agreed to move the Memorial to its present site, at the east end of Columbia Pike, on the grounds of Fort Myer just south of Arlington National Cemetery.[2]

On 28 December 2001, President George W. Bush signed the Defense Authorization Bill, which included a rider directing the Department of Defense to make available to the Air Force Memorial Foundation up to 3 acres (12,000 m2) of the Naval Annex property for use as the location for the memorial. Formal groundbreaking of the site was held in September 2004. Construction of the spires began in February 2006 and was completed in seven months.

The memorial was dedicated on 14 October 2006, with approximately 30,000 people attending. The keynote address was delivered by President Bush, a former F-102 Delta Dagger pilot with the Texas Air National Guard. The first official ceremony at the memorial was held the next day when Secretary of the Air Force Michael Wynne laid beneath the spires a memorial wreath for fallen airmen.[3]

"To all who have climbed sunward and chased the shouting wind, America stops to say: your service and your sacrifice will be remembered forever, and honored in this place by the citizens of a free and grateful nation." —President George W. Bush at acceptance ceremony.[4]

The Air Force Memorial Foundation, the organization created to plan for and build the Memorial, continues today as an affiliate of the Air Force Association. 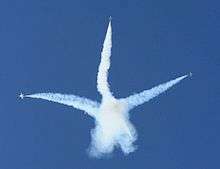 The three memorial spires range from 201 feet (61 m) to 270 feet (82 m) high and appear to be soaring; its array of stainless steel arcs against the sky evoke the image of "contrails of the Air Force Thunderbirds as they peel back in a precision 'bomb burst' maneuver." Only three of the four contrails are depicted, at 120 degrees from each other, as the absent fourth suggests the missing man formation traditionally used at Air Force funeral fly-overs.[5]

The spire structure consists of stainless steel plates with high-strength concrete filling the lower 2/3 of each spire. The upper third is hollow stainless steel.[6] At the transition between concrete and hollow steel portions, dampers provide aerodynamic stability and dissipate wind sway energy. Each damper consists of a lead ball weighing about a ton that is allowed to roll inside a steel box. The structural design of the spires was completed by the Arup engineering consultancy.

The pedestrian approach to the spires is from the west. South of the approach, before the inscription wall, stand four 8-foot-tall (2.4 m) bronze statues of representing the United States Air Force Honor Guard, sculpted by Zenos Frudakis. To the north, a stone plaza leads you to the glass contemplation wall, a free-standing glass panel with the images of four F-16s flying in a Missing man formation engraved on both sides of the 5-ply panel. Except for the information kiosks outside the administration building, it is the only part of the memorial that depicts aircraft. The north inscription wall is visible through it.[7]

The two inscription walls are located at each end of the central lawn. The walls are 56 feet (17 m) in length, 10 feet (3.0 m) in height and one foot thick. Both walls are made of polished, highly-reflective monolithic Jet Mist granite and both include a two and a half inch outer inscription panel made from Absolute Black granite. The north wall bears the names of Air Force recipients of the Medal of Honor, and the south wall bears inspirational quotations regarding core values, particularly the Air Force's three core values: "integrity first, service before self, and excellence in all we do".[8]

One name has been removed from the Medal of Honor Recipients, under the header of "Peacetime". This name listed was that of William "Billy" Mitchell, and it was removed due to a clerical error in actual Medal of Honor recipients in a Congressional Report published in 1979. His name was included on the wall at the memorial in error and has since been removed. The removal is quite visible, with the name being cut out of the stone, and a new stone filler in its place above the name of Charles Lindbergh. ″There is some debate as to whether William Mitchell was in fact awarded the Medal of Honor or the Congressional Gold Medal. The act cited directs that "a gold medal" be struck and presented in recognition of Mitchell's pioneer service and foresight. It does not, however, specify which medal was to be awarded. In July 1945 the War Department had recommended to Congress that special gold medals be voted by Congress in cases of outstanding leadership and that the Medal of Honor be reserved for awarding only gallantry in action. Colonel William "Billy" Mitchell was awarded the Congressional Gold Medal, which was announced using the identical citation and approved date as listed for the award above. It seems apparent that the intention was to award the Gold Medal rather than the Medal of Honor. However, for some unknown reason, when the Senate Committee on Veterans' Affairs published its report, Medal of Honor Recipients: 1863-1978 (Washington, D.C.: Government Printing Office, 1979) compiling all Medal of Honor Recipient citations, William Mitchell and his citation were included. This website takes its Medal of Honor citations from that report, and that is why Mitchell's citation is included here - though it should be noted, the "gold medal" authorized above is most likely the Congressional Gold Medal, rather than the Medal of Honor." [9]

In addition to hosting over 275,000 visitors throughout the year, the Air Force Memorial is host to more than 250 military ceremonies, weddings, funerals, and other special events. During the summer, the United States Air Force Band hosts concerts every Friday night. A schedule of events can be located at http://www.airforcememorial.org/airforcememorial/events/recentcommunityeventsdashboard.