The first Secretary of the Air Force, Stuart Symington, was sworn-in on September 18, 1947 upon the re-organization of the Army Air Forces into a military department and a military service of its own, independent of the War Department/Army, with the enactment of the National Security Act. The salary of SECAF IS $179,700, Level II.

President Obama nominated James on August 1, 2013. At that time, she was serving as president of the technology and engineering sector at Science Applications International Corporation.

The term 'department', when used with respect to a military department, means the executive part of the department and all field headquarters, forces, reserve components, installations, activities, and functions under the control or supervision of the Secretary of the department.[5]

The exclusive responsibilities of the Secretary of the Air Force are enumerated in Title 10 Section 8013 (b) of the United States Code. They include, but are not limited to:


(2) Organizing.
(3) Supplying.
(4) Equipping (including research and development).
(5) Training.
(6) Servicing.
(7) Mobilizing.
(8) Demobilizing.
(9) Administering (including the morale and welfare of personnel).
(10) Maintaining.
(11) The construction, outfitting, and repair of military equipment.
(12) The construction, maintenance, and repair of buildings, structures, and utilities and the acquisition of real property and interests in real property necessary to carry out the responsibilities specified in this section.[6] 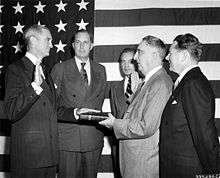 Stuart Symington is sworn-in as Secretary of the Air Force by Chief Justice Fred M. Vinson on September 18, 1947.

...shall develop, coordinate, and integrate plans and programs for space systems and the acquisition of DoD Space Major Defense Acquisition Programs to provide operational space force capabilities to ensure the United States has the space power to achieve its national security objectives.[11][12]

Office of the Secretary of the Air Force

The Office of the Secretary of the Air Force is composed of: