Currently, promotion from Second Lieutenant to First Lieutenant is virtually guaranteed after two years of satisfactory service. Promotion to Captain is virtually guaranteed after another two years of satisfactory service. Previously there was a Promotion Board to Captain, but that was discontinued in 2013.[1] An officer's record is reviewed by a selection board at the Air Force Personnel Center at Randolph Air Force Base in San Antonio, Texas. This process occurs approximately between the nine- and eleven-year mark, where a certain percentage of Captains will be selected for Major. This process will repeat at the 13-16 year mark for promotion to Lieutenant Colonel and then around the twenty-year mark for promotion to Colonel. 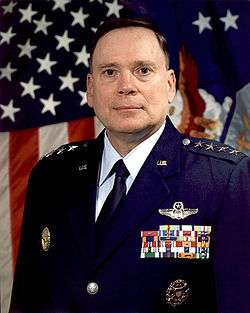 The Flight Duty Uniform (FDU) features subdued cloth rank insignia sewn onto the shoulders. The Air Force flight cap is worn with the FDU and service dress uniforms. The flight cap is solid Air Force Blue for enlisted personnel, but features a solid silver edge braid for general officers, and an edge braid in a silver and blue diamond pattern for other officers. Officers wear a bright metal rank insignia toward the front edge of the (wearer's) left side of the flight cap.

The Battle Dress Uniform (BDU) and Airman Battle Uniform (ABU) feature subdued cloth rank insignia worn on both sides of the collar. The BDU cap features a rank insignia centered on the front of the cap, above the bill, which may be a subdued cloth insignia or subdued metal pin-on insignia, MAJCOM commanders may authorize wear of the bright non-subdued grade insignia by officers on BDU caps while in garrison.[2] Air Force officers authorized to wear berets (including Security Forces, Special Tactics Officers, and Combat Weather) wear a bright metal rank insignia on the beret's flash.

The current Air Force officer rank names and insignia were borrowed from the Army upon the establishment of the Air Force as a separate service in 1947. This explains why the Air Force has brigadier generals but no brigades. The insignia have been essentially unchanged since then, except for a brief period during the 1990s.

The Army origin explains why the color silver outranks gold in Air Force officer insignia. In the early 19th century, Army infantry colonels wore gold eagles, while all other Army colonels wore silver eagles. When the Army later decided to adopt a single color of eagles for all colonels, that single color was silver, apparently because more silver eagles than gold eagles were already in use. Lieutenant colonels received silver oak leaves next, to match the silver eagles of full colonels. Majors were then given gold oak leaves to distinguish them from lieutenant colonels. Once the precedent of silver outranking gold was set, it was followed when gold bars were later created for second lieutenants, who had no grade-specific insignia until the early 20th century. 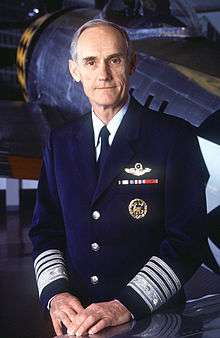 General Merrill A. McPeak wearing the "McPeak uniform" with rank insignia on the sleeves

During the 1990s, Air Force Chief of Staff General Merrill A. McPeak redesigned the service dress uniform to give it a more distinctive look. His redesign replaced the metal rank insignia for officers with silver braid on the sleeves, similar to the Navy's officer rank insignia and that of the United States Coast Guard and those used by various naval forces worldwide. This was similar to the rank insignia of the British Royal Air Force, the Canadian Armed Forces and other Commonwealth air forces and air forces using similar sleeve insignia. The uniform reforms also introduced for the first time in the USAF slip-on shoulder marks on the other uniforms, using the traditional rank insignia. The "McPeak uniform" was very unpopular, drawing comparisons to the jackets worn by airline pilots, and the traditional rank insignia were reinstated within a week of General McPeak's retirement in 1994 on the shoulder boards, while the slip-on insignia stayed.