Islamic music may refer to religious music, as performed in Islamic public services or private devotions, or more generally to musical traditions of the Muslim world. The classic heartland of Islam is the Middle East, North Africa, the Horn of Africa, Iran, Central Asia and South Asia, and it also included the medieval Iberian peninsula (al-Andalus). Due to Islam being a multi-ethnic religion, the musical expression of its adherents is vastly diverse. Indigenous traditions of various part have influenced the musical styles popular among Muslims today. 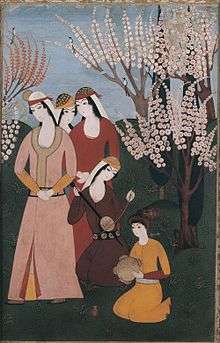 All of these regions were connected by trade long before the Islamic conquests of the 7th century, and it is likely that musical styles traveled the same routes as trade goods. However, lacking recordings, we can only speculate as to the pre-Islamic music of these areas. Islam must have had a great influence on music, as it united vast areas under the first caliphs, and facilitated trade between distant lands. Certainly the Sufis, brotherhoods of Muslim mystics, spread their music far and wide.

The Berber and Arabic speaking countries of North Africa, such as Morocco, Algeria, and Tunisia, share some musical traditions with Egypt and the Arab countries of the Middle East. Popular modern styles of music such as Raï and Chaabi originated in Berber counties. In addition, West African influences can be heard in the popular music of Gnawa.

Most Somali music is based on the pentatonic scale. That is, the songs only use five pitches per octave in contrast to a heptatonic (seven note) scale such as the major scale. At first listen, Somali music might be mistaken for the sounds of nearby regions such as Ethiopia, Sudan or Arabia, but it is ultimately recognizable by its own unique tunes and styles. Somali songs are usually the product of collaboration between lyricists (midho), songwriters (lahan), and singers ('odka or "voice").[1] Instruments prominently featured in Somali music include the kaban (oud).

Islam is the largest organized religion on the continent, although indigenous styles and genres are more prominent than those influenced by Middle-Eastern theory.

West African musical genres are more varied, and tend to incorporate both native and Berber influences, rather than those of Arab origin. A long history of court griot music based on historical accounts and praise-singing exists in the region. Wind and string instruments, such as the Kora or Flute are generally preferred to percussion, although percussion instruments such as the talking drum and djembe are also widely played.

Many of the countries in Central Asia such as Uzbekistan, Tajikistan and Turkmenistan have been heavily influenced by Turkish and Persian culture. Bowed instruments are common, as is bardic singing.

The music of the Muslim populations of South Asia (Maldives, Pakistan, India and Bangladesh, with Nepal and Sri Lanka) merged Middle Eastern genres with indigenous classical musical modes, and is generally distinct in style and orchestration, yet due to the strong links encountered between the Middle-East, Central Asia, and South Asia, it is closer to Middle-Eastern styles than those of the periphery of the Islamic world, which tend to be purely indigenous. 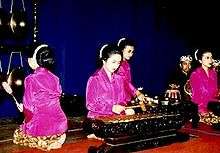 Having never been conquered by the Islamic Empire, Muslim-majority Indonesia has been significantly less influenced by Middle Eastern traditions than South Asia.

As a result, many local musical styles predate the coming of Islam, although exceptions include Malay Zapin and Joget, and the Indonesian Gambus, all of which show strong Middle Eastern influence.

The music of South East Asia's Muslim-majority regions is more closely related to the musical genres of South East and East Asia. Gong chime ensembles such as Gamelan and Kulintang existed in the region before the arrival of Islam, and musical theory and method owe more to heavy Chinese influence, as well as Hindu-Buddhist principles, than to Arabic musical philosophy. Variations of one of two main scales prevail in the region among different ensembles: slendro and pelog (both of which originated in Java).

In Java, use of the gamelan for Islamic devotional music was encouraged by the Muslim saint Sunan Kalijogo.

Nasheeds are moral, religious songs sung in various melodies by some Muslims of today without any musical instruments. However, some nasheed groups use percussion instruments, such as the daff. Singing moral songs of this type without instrumentation is considered permissible (halal) by many Muslims.

The dhikr of South Asian Muslims is "quietist". The Sufi services best known in the West are the chanting and rhythmic dancing of the whirling dervishes or Mevlevi Sufis of Turkey.

However, Sufis may also perform devotional songs in public, for the enjoyment and edification of listeners. The mood is religious, but the gathering is not a worship service.

In Turkey, once the seat of the Ottoman Empire and the Caliphate, concerts of sacred song are called "Mehfil-e-Sama' " (or "gathering of Sama'"). Song forms include ilahi and nefe.

In South Asia, especially Pakistan and India, the most widely known style of Sufi music is qawwali. A traditional qawwali programme would include:

Shi'a qawwali concerts typically follow the naat with a manqabat in praise of Ali, and sometimes a marsiya, a lamentation over the death of much of Ali's family at the Battle of Karbala.

Another traditional South Asian genre of Sufi music is the Kafi, which is more meditative and involves solo singing as opposed to the ensemble form seen in qawwali. The most widely known exponent of the Kafi is the Pakistani singer Abida Parveen.

Sufi music has developed with the times. A Pakistani Sufi rock band, Junoon, was formed in the 1990s to bring a modern twist to suit the new younger generation. The band achieved wide popularity, in Pakistan as well as in the West.

Some Muslims believe that only vocal music is permissible (halal) and that instruments are forbidden (haram). Hence there is a strong tradition of a cappella devotional singing.

Yet some Muslims believe that any instrument is lawful as long as it is used for the permissible kinds of music. Hence there is a long tradition of instrumental accompaniment to devotional songs. A wide variety of instruments may be used, depending on local musical traditions.

When lyrics are not simply repeated and elaborated invocations (Yah Nabi and the like), they are usually poems in forms and meters common in the local literature.

The question of permissibility of music in Islamic jurisprudence is historically disputed.[2] Imam al-Ghazzali, one of the most famous Muslim scholars, writing almost a thousand years ago, reported several hadith and came to the conclusion that music is permitted, saying: “All these Ahadith are reported by al-Bukhari and singing and playing are not haram.”[3] Despite this, some Salafist groups interpret the chapters of Luqman and Al-Isra in the Quran as evidence that music is haram,[4] although this is disputed by others who disagree.[5]

Those who do not allow music believe that Muhammad censured the use of musical instruments when he said: "There will be among my Ummah people who will regard as permissible adultery, silk, alcohol and musical instruments".[6] Islamic scholars of the past who agreed upon this include Abu Hanifa, Al-Shafi'i, Malik, Ahmad bin Hanbal, Al-Tabari, Al-Hasan Al-Basri, Al-Bukhari, Al-Tirmidhi, Al-Nawawi, Al-Bayhaqi, Al-Tahawi, and Al-Qurtubi. However, those who argue that music is halal (permitted) state that this hadith relates to usage—at the time the polytheists used music and musical instruments as part of their worship- and does not apply to all music.[7] They also point out that in the Quran, it is stated that Hazrat Dawud was given the Psalms.[8] (an-Nisa, 4/163; al-Isra, 17/55). In other Islamic resources, it is stated that the Psalms given to Hazrat Dawud were sent down in the month of Ramadan, that it contained sermons and words of wisdom and that Hazrat Dawud usually recited it accompanied by a melody and a musical instrument;[9] therefore music is permitted. Supporters of this view also point out that in classical Islamic jurisprudence and Sharia, the Quran is the higher authority on correct Islamic practice; the hadith, while important, are secondary to the Quran.[10]

Those who saw the permissibility of music include some of the most famous Muslim scholars, jurists, philosophers and Sufi poets of the Muslim world, including Abu Bakr ibn al-Arabi, Ibn al-Qaisarani, Ibn Sina, Abu Hamid al-Ghazali, Rumi, Ibn Rushd, and Ibn Hazm. Al-Ghazali also reports a narration from al-Khidr, where he expressed a favorable opinion of music, provided it be within the usage limitation of virtuous areas.[11][12] Al-Ghazali has been referred to by some historians as the single most influential Muslim after the Islamic prophet Muhammad.[13]

Certain schools of Sunnis as well as some Shiites hold that music is forbidden with the sole exception being that women can play the Daf, a traditional one sided drum, at celebrations and festivals.[14] However some Islamic groups and denominations deem music permissible including many Sufi orders who use music as part of their worship.[15]

According to some authorities Islam does allow singing without musical accompaniment within prescribed circumstances—namely that the performer be of the same gender as the audience,[16] although this contradicts a well-known hadith in which two girls sang a song to the Prophet Muhammad and he instructed Abu Bakr to let them, stating, "Leave them Abu Bakr, for every nation has an 'Id (i.e. festival) and this day is our 'Id.".[17] Others hold that music is permitted in Islam provided that the lyrics are not obscene or vulgar.[18]

Based upon the Shia ahadith, Grand Ayatollah Sadiq Hussaini Shirazi (an opponent of the current theocratic regime in Iran) ruled that all music and instrument playing is haram, no matter the purpose.[19] However, this is not the official position of the Islamic Republic of Iran. Grand Ayatollah Ali Khamenei, the current supreme leader of Iran and one of the highest-ranking Shia clerics in the world, has stated his admiration of western music,[20] and music is permitted in Iran as long as it is either Iranian folk music, Iranian Classical music, or Iranian pop music.[21]

Islamic views on the permissibility of musical instruments and singing

Islamic views on the permissibility & prohibition of musical instruments and singing

Islamic views on the prohibition of musical instruments and singing