This article is about a specific carpet. For the general type of rug, see Ardabil rug. 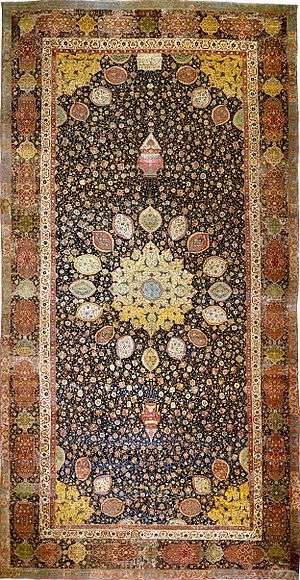 The Ardabil Carpets (Ardebil Carpets) are a pair of famous Iranian Azerbaijani carpets in the collections of the Victoria and Albert Museum in London and the Los Angeles County Museum of Art. They are examples of Ardabil rugs.

The foundation is of silk with wool pile of a knot density at 300–350 knots per square inch (47–54 knots per cm2). The size of the London carpet is 34 1⁄2 by 17 1⁄2 feet (10.5 m × 5.3 m), which gives it about 26 million knots in total.[1] The carpets have an inscription: a couplet from a ghazal by Persian mythic poet Hafiz Shirazi and a signature.[2] The difference in size between the two lamp motifs flanking the central medallion is now seen as a deliberate use of graphical perspective; when seen from the end with the smaller lamp the two appear the same size.[3]

Completed during the rule of the Safavid Shah Tahmasp I in the mid-16th century, probably in Tabriz, the carpets are considered some of the best of the classical Iranian (Persian) school of carpet creation. They were first placed in a mosque in Ardabil, but they had become heavily worn in Iran and were sold in 1890[4] to a British carpet broker who restored one of the carpets using the other and then resold the restored one to the Victoria and Albert Museum. William Morris, then an art referee for the V&A, was instrumental in the acquisition.[5]

The second "secret" carpet, smaller, now borderless and with some of the field missing, and made up from the remaining usable sections, was sold to American businessmen Clarence Mackay and was exchanged by wealthy buyers for years. Passing through the Mackay, Yerkes, and De la Mare art collections, it was eventually revealed and shown in 1931 at an exhibition in London. American industrialist J. Paul Getty saw it, and bought it from Lord Duveen for approximately $70,000 several years later. Getty was approached by agents on behalf of King Farouk of Egypt who offered $250,000 so that it could be given as a wedding present.[6] Getty later donated the carpet to the Los Angeles County Museum of Science, History, and Art in the Exposition Park in Los Angeles. Other fragments have appeared on the market from time to time. The knot density is actually higher on the Los Angeles carpet.[7]

This Persian carpet has been the subject of numerous copies ranging in size from small rugs to full scale carpets. There is an 'Ardabil' at 10 Downing Street and even Hitler had an 'Ardabil' in his office in Berlin.[5][8] The London carpet was for decades displayed hanging on a wall. Since 2006, it has been shown flat in a special glass pavilion in the centre of the main gallery of Islamic art. The lighting is kept low to prevent fading.[9]

The 'Ardebil' carpet, now in the Victoria & Albert Museum in London, is probably the best known of all old Persian carpets. It is one of a pair which came to England in 1893 virtually in tatters. The decision was made to sacrifice one carpet so that the other could be restored. The cost of this work was prohibitively high, even for a museum, and it was only after an extensive public appeal that sufficient funds were raised for work to go ahead. There can be little doubt that in this case the end justified the means. The carpet, measuring 38′ long by 18′ wide, is an extremely fine specimen bearing an inscription by the weaver. This inscription reads:

I have no refuge in the world other than thy threshold.
There is no protection for my head other than this door.
The work of the servant of the threshold Maqsud of Kashan in the year 946.

Translating this date into the Christian calendar shows that the carpet was woven around the years 1539–40 during the reign of Shah Tahmasp, one of the great patrons of carpet weaving. The incomplete remainder of the other 'Ardebil' carpet, which bears the same inscription and date, was given by J. Paul Getty to the Los Angeles County Museum.
— Essie Sakhai, The Story of Carpet.[10]