Wilton is a town and civil parish in Wiltshire (of which it was once the county town), England, with a rich heritage dating back to the Anglo-Saxons. Carpets have been manufactured at Wilton since the 18th century. Today it is overshadowed by its larger neighbour, Salisbury, but still has a range of notable shops and attractions, including Wilton House.

The confluence of the rivers Wylye and Nadder is at Wilton.

The history of Wilton dates back to the Anglo-Saxons in the 8th century AD, and by the late 9th century it was the capital of Wiltunscire, a shire of the Kingdom of Wessex. It remained the administrative centre of Wiltshire until the 11th century. Wilton was of significant importance to the church, with the founding of Wilton Abbey in AD 771 and a number of other establishments. In AD 871 Alfred the Great fought and lost an important battle there against the Danish armies, leaving him in retreat for several years.[2]

Despite further attacks, Wilton remained a prosperous town, as recorded in the Domesday book.[3] The building of Salisbury Cathedral nearby, however, caused Wilton's decline, as the new site of Salisbury, with a new bridge over the River Avon, provided a convenient bypass around Wilton on the trade routes.

Wilton Abbey was surrendered to Henry VIII in 1539 during the Dissolution of the Monasteries, and in 1541 much of the estate was granted to Earl William Herbert of Pembroke, upon which Wilton House was built. 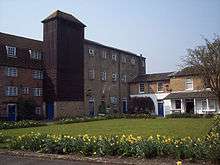 By the 17th century, weaving had become a large trade, and the carpet industry began in 1741, when two French weavers were brought in by Earl Henry Herbert of Pembroke to teach the local people new skills. Carpet weaving prospered until 1815, when peace following the Napoleonic Wars introduced European competition. Machinery to produce Axminster carpets was installed in 1835.[4] The Wilton Royal Carpet Factory was founded at the turn of the century, with the help of the then Lord Pembroke, to rescue the previous carpet factory that had fallen into financial difficulty. The carpet factory continued to operate until 1995, when it closed temporarily after a takeover. The factory re-opened, although it was unable to retain the Wilton Royal prefix.[2]

An outbreak of smallpox in 1737 killed 132 people.[2] Local folklore claims that the outbreak was believed to be associated with the witchcraft of the four Handsel sisters, who were summarily murdered and buried in Grovely Wood.

Wilton had two railway stations. One (later known as Wilton North) was opened by the Great Western Railway in 1856 on their line from Westbury to Salisbury, and another (later known as Wilton South) opened by the Salisbury and Yeovil Railway in 1859 on the West of England Main Line from London to Exeter. The arrival of the railways led to increased prosperity. The railway stations closed in 1955 and 1966 respectively; the nearest station is now at Salisbury.

The headquarters of Land Forces (and predecessors) was at Erskine Barracks, northeast of Wilton, from 1949 to 2010. After the headquarters moved to Marlborough Lines near Andover the site was sold for housing.

The boundaries of the modern civil parish originate with the Borough of Wilton defined in 1885.[5] The parish includes the villages of Bulbridge and Ditchampton. In 1894 Wilton absorbed the western part of the neighbouring parish of Fugglestone St Peter, the rest going into a new parish of Bemerton.[6]

The parish elects a town council. It is in the area of Wiltshire Council unitary authority, which is responsible for all significant local government functions.

Wilton is in the 'Wilton and Lower Wylye' electoral ward. This ward stretches north from Wilton to South Newton. The total ward population taken at the 2011 census was 4,806.[7] 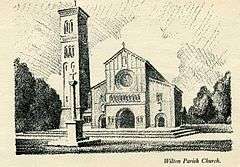 The Grade I listed[8] Church of England parish church of St Mary and St Nicholas was built as a replacement for St Mary's Church between 1841 and 1844 at the instigation of the Countess Alexina Sophia Gallot of Pembroke and her younger son, Baron Sidney Herbert of Lea, designed by the architect Thomas Henry Wyatt in the Romanesque style, with considerable Byzantine influences.[9] For a small town, the church is enormous, representing the wealth of its benefactors.

The most notable external feature of the church is the 105 feet (32 m) campanile. Many of the materials used in the church's construction were imported from Europe, including marble columns from Italy and 12th and 13th century stained glass from France.