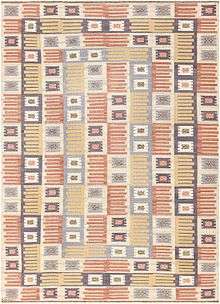 Carpets and rugs have been handmade knotted wool in Sweden for centuries, taking on many different forms and functions over the course of time. Rugs woven in the traditional Oriental manner, especially in the Ottoman Empire and points east, were originally brought to Sweden over trade routes as early as the early Middle Ages. In the centuries that followed, Swedish rug-makers often infused their works with themes and motifs traditionally found in Oriental rugs. Eventually, Swedish rug-makers would begin to use Oriental rug-making techniques, but themes and motifs more consistent with the artistic and cultural heritage of Sweden. By the early modern periods, rugs had long been an important avenue of art – especially folk art – in Swedish culture. By the beginning of the twentieth century, the craft was seen as being an important artistic and cultural practice throughout Sweden, and designers began to make rugs that had a broad international appeal. Swedish rugs from the mid-twentieth century remain among the most desirable and sought after in the rug world. 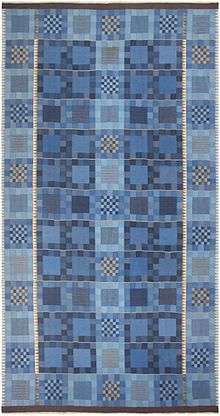 The history of Swedish rugs reads similarly to the broader history of Scandinavian rugs, though with several distinctive, important developments. First, it is important to note that Swedish people were creating weaves for a very long time before the craft began to be taken seriously as a valid avenue of Swedish artistic expression.[1] One of the most important Swedish rug-making techniques to have widespread practice and implementation was that which resulted in Rollakans, which are traditional flat weaves. Very popular among Swedish folk-artists, Rollakans were often used as bed coverings and for general display purposes, and, as such, often featured appealing all-over patterns. Such rugs are very highly sought after in today’s rug market due to their perception as quintessentially Swedish compositions.

A similar unique development in the history of Swedish rug-making is the rya, a very distinctive Swedish style of rug.[2] Unlike its cousin the flat-woven Rollakan, the rya is a long-pile sort of rug that was originally developed for use as protection from the harsh arctic climate of Sweden. Utilizing the weaving and knotting techniques that were introduced into early Middle Ages Sweden by travellers and traders from the Ottoman Empire, Swedish rug-makers began in earnest the manufacture of the rugs that would become ryas.[1] These long-pile pieces were utilized for a myriad of reasons over time, filling various roles in Swedish culture in society as tastes and sensibilities evolved.

Despite not being a craft of Swedish origin, centuries of rug-making firmly established the practice as an important Swedish cultural tradition. By the modern period, Sweden had a long, established heritage of rug-making. By the early twentieth century, artists and designers throughout Sweden were beginning to work with rugs, suddenly elevating the craft from traditional folk-art to a serious international phenomenon. Designers such as Märta Måås-Fjetterström and Barboro Nilsson began designing rugs in the 1920s, and by the 1940s Swedish rugs were being hungrily acquired by collectors all over the world. From its humble origins, Swedish rug-making had transformed to a cottage industry of tremendous breadth and depth, while simultaneously exercising tremendous influence over the aesthetic direction of the rug-making world. 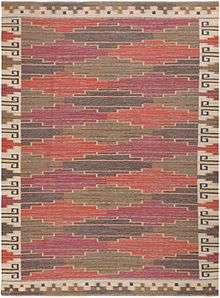 After being endorsed by such titans of modernism and proponents of modern design as Le Corbusier, Ray Eames and Frank Lloyd Wright, Swedish rugs quickly became a highly desirable commodity. Swedish Country Interiors by Edie van Breems The traditional geometric and abstract designs and the long pile of Rya rugs were considered especially desirable due to their perceived aesthetic complement to the hardwood, metal, and sparseness favored by modern designers. As homeowners began to transition toward a preference for modern aesthetics, it became difficult for Sweden to keep up with the demand for high-quality Ryas and other rugs. The design studio founded by Märta Måås-Fjetterström in 1919 – and later headed by Barbro Nilsson after Mass-Fjetterstrom’s death in 1941 – became an important center for Swedish rug design, and remains so today.

This article is issued from Wikipedia - version of the 6/7/2015. The text is available under the Creative Commons Attribution/Share Alike but additional terms may apply for the media files.