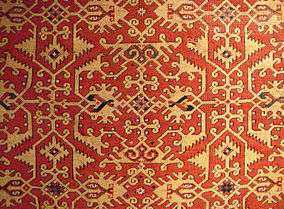 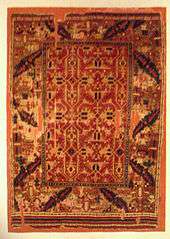 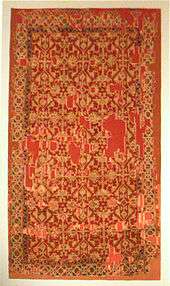 A Lotto carpet is a hand knotted carpet having a pattern that was primarily produced during the 16th and 17th centuries along the Aegean coast of Anatolia, Turkey, but also copied in various parts of Europe. It is characterized by a lacy arabesque, usually in yellow on a red ground, often with blue details. The name, "Lotto carpet", refers to the inclusion of carpets with this pattern in paintings by the 16th-century Venetian painter Lorenzo Lotto, though they in fact appear in many earlier Oriental carpets in Renaissance painting.

Lotto carpets used to be known as Small-pattern Holbein Type II by Western scholars, but Holbein never painted one, unlike Lorenzo Lotto who did so several times, though he was not the first artist to show them. Lotto is also documented as owning a large carpet, though its pattern is unknown. Though they look very different from Holbein Type I carpets, they are a development of the type, where the edges of the motifs take off in rigid arabesques somewhat suggesting foliage, and terminating in branched palmettes. The type was common and long-lasting, and is also known as "Arabesque Ushak".[1] They are still found in paintings by Murillo and Zurbarán in the 17th century, and Dutch paintings until the 1660s and sometimes later.[2]

In the 16th and 17th centuries they were copied in Italy, Spain, the European part of the Ottoman Empire, and even in England, and many modern copies have also been produced.[4]