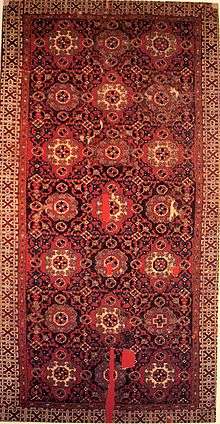 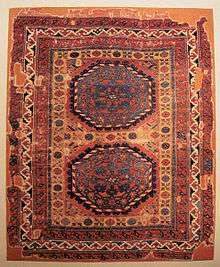 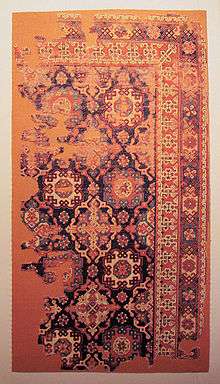 Holbein carpet are a type of Ottoman carpets taking their name from Hans Holbein the Younger, due to their depiction in European Renaissance paintings. Actually, these in fact are seen in paintings from many decades earlier than Holbein, and are sub-divided into four types (of which Holbein actually only painted two); they are the commonest designs of Anatolian carpet seen in Western Renaissance paintings, and continued to be produced for a long period. All are purely geometric and use a variety of arrangements of lozenges, crosses and octagonal motifs within the main field. The sub-divisions are between:[1]

Holbein frequently used carpets in portraits, on tables for most sitters, but on the floor for Henry VIII.

This article is issued from Wikipedia - version of the 11/27/2014. The text is available under the Creative Commons Attribution/Share Alike but additional terms may apply for the media files.