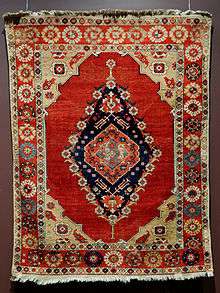 The cultural heritage of the Transylvanian rugs originated from three conditions:

Due to its geographical position, Transylvania has been an important trade center between East and West during the 15th–17th century. Pile woven carpets from Anatolian manufacturers were part of the merchandise, and were traded in large numbers. Anatolian carpets were also appreciated as objects of high value and prestige, and collected as such by Transylvanian municipalities and individual persons. Inscriptions on the rugs and church records prove that rugs and carpets were donated as decorative wall and pew furnishings to Protestant churches. By their preservation in Christian churches, the rugs were protected from wear and the changes of history, and often remain in excellent condition today.[3]

Organized trade between the Romanian countries and the Ottoman Empire began with Sultan Mehmed II's decree of 1456, granting Moldavian merchants the right to travel to Constantinople for trade. The first known document from Brașov relating to rug trade was issued between 1462 and 1464.[4] Vigesimal accounts for various towns are preserved and bear evidence of the large amount of carpets transported through Transylvania. The extent of this trade can be judged from the much quoted Braşov vigesimal register of 1503, which states that over 500 Turkish rugs entered the town during one single year.[3]

The role of Turkish rugs as trade goods of high value and prestigious collectibles is documented in the merchant accreditations, vigesimal accounts, municipal and church annals as well as individual contracts and wills, archived in the Transylvanian towns. The municipalities and other institutions of the Saxon towns, persons of nobility and public influence, as well as citizens were owners of Ottoman rugs. The towns acquired Turkish rugs either as customs duty paid in like, or purchased rugs from the trade. Rugs were frequently offered to public persons as a gift of honour.[5] It has been estimated that from 1500 to 1700 over one thousand rugs were used as gifts from the municipality of Brașov alone ([6] cited after[3]). Rugs were used to mark the place of individual persons, or members of a guild, in church. There is also evidence of collections owned by private persons. Contracts specify that the rugs were hung on the walls of private homes for decoration. As such, rugs were used to confirm the social status of the owner, but the reports also confirm that the carpets were perceived as objects of beauty and art. The Transylvanian Saxons referred to them as "Kirchenteppiche" ("church carpets")[7] even though a significant number of the rugs which still are on display in Transylvanian churches show Islamic prayer rug designs.[3] 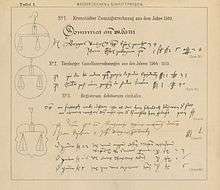 By the end of the nineteenth century, rugs from Transylvanian churches were sought after by rug dealers and collectors. The Austrian art historian Alois Riegl recognized their artistic and historic value, and renewed the interest of the local population in the carpets which either still adorned their churches, or were neglected and stored elsewhere.[9] Following Riegl's advice, a first inventory of the existing rugs was established by Ernst Kühlbrandt, who had them cleaned, and put on display again.[10] The term "Transylvanian rug" was first used by Neugebauer and Orendi in the 1906 edition of their handbook on Oriental rugs.[11] It was a term of convenience, since at this time, it was not entirely clear yet that the carpets had been produced in Anatolia, and a local production was discussed.[12] The Budapest carpet exhibition of 1914 already included a total of 354 old Turkish rugs, of which 228 pieces came from Transylvania[13] In 1925, Végh and Layer published an album in Paris entitled "Tapis turcs provenants des églises et collections de Transylvanie", republished in 1977 by Clara and Marino Dell'Oglio under the title "Turkish rugs in Transylvania".[14]

The main source of information about Transylvanian rugs came from Emil Schmutzlers seminal study "Altorientalische Teppiche in Siebenbürgen (Ancient oriental carpets in Transylvania)", published in Leipzig in 1933.[15] More recently, the Transylvanian carpets were documented in detail in a series of books by Stefano Ionescu.[3]

Around 100 rugs with double niches are known from Transylvania.[3] Usually their format is small, with borders of oblong, angular cartouches whose centers are filled with stylized, counterchanging vegetal motifs, sometimes interspersed with shorter stellated rosettes or cartouches.[12] The first depiction of rugs with this border design appears in Netherlandish paintings of the early seventeenth century. The 1620 "Portrait of Abraham Graphaeus" by Cornelis de Vos, and Thomas de Keysers "Portrait of an unknown man" (1626) and "Portrait of Constantijn Huyghens and his clerk" (1627) are amongst the earliest paintings depicting rugs of the "Transylvanian double-niche" type.[16] In Transylvania, the first references to this design type date from around 1620, and the earliest carpets of this type with inscriptions date to 1661 and 1675[3]

A smaller group of the double-niche type has at both ends of the field a niche, or arch-like form, which is formed by two separate corner medallions. The medallion corners are decorated with interlacing arabesques resembling similar design types known from "double niche" Ushak carpets, but with a slightly stiffer design. The majority of Transylvanian double-niche rugs are characterized by more heavily stylized corner pieces which are best described as spandrels to a niche, as the separation of the two corner medallions is no longer visible. In the center of these spandrels often stands a larger, plain rosette, while the remaining space is filled with rather crude ornaments. Their field sometimes shows two pairs of vases with undulating motifs in opposing colours. The field is decorated with small floral ornaments, which are drawn in an elaborate, curvilinear manner in earlier examples, and become more stiff and schematic in later pieces. The design is always symmetrically arranged towards the vertical axis. Double-niche Transylvanian carpets with a central medallion sometimes have a medallion design which closely resembles those seen in Ushak rugs. In other, probably later examples, the field decor is condensed into medallions of concentric lozenges and rows of eight-petalled flowers connected by projecting stems of curled leaves. Often central medallions of this type contain a central cruciform ornament. The ground colour is yellow, red, or dark blue.[3]

A small group of prayer rug design carpets closely resembles the "double-niche" type with vase motif, the difference being that there is only one single niche. The decoration of the field, the profile of the niche, the design of the spandrels and borders differ from the carpets with prayer rug design. The very few surviving pieces with single-niche design are markedly similar to each other.[3] 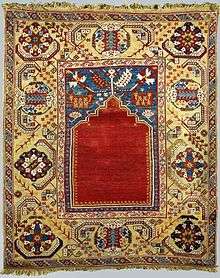 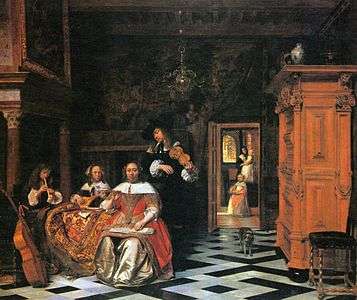 Transylvanian rugs with a prayer rug design are characterized by a single red niche, white spandrels with a waving curvilinear floral stem bearing various kinds of flowers and flowerbuds, and ochre yellow borders with curvilinear patterns. The fields are usually ochre, sometimes red. It is almost always empty of additional ornaments, with the exception of small floral ornaments close to the edge or in place of a mosque lamp at the top of the niche. The niche itself shows design types also known from Ottoman prayer rugs from Anatolia: the "head and shoulder" design, high or low point of the arch, and with serrated or stepped outlines. The similarities of the design with their Anatolian counterparts has led to the attribution of specific Transylvanian carpets to more specific Anatolian proveniences like Ghiordes or Melas. The design is related to the Ottoman court prayer rugs of the second half of the sixteenth century.[3] A carpet of this type is depicted in Pieter de Hoochs 1663 painting "Portrait of a family making music".[16]

Column rugs are characterized by column motifs supporting an architectural structure, most often an arch. In later examples, the architectural elements undergo a process of stylization and change into decorative elements like floral bands or scrolls. This process is well documented for the process by which Ottoman court manufacture designs have been integrated into rural village and nomadic design traditions. Consequently, the Transylvanian column rugs resemble rugs from Anatolian production centers like Ghiordes, Kula, Ladik, and Karapinar. Column rugs with a single-arched niche have spandrels decorated with flowering-stem patterns on an ivory ground. The arch may be rounded or serrated. Examples are known with more than two columns. Generally, the plinths are well drawn. The colour of the field is red or ochre, and the borders show floral patterns.[3]

Anatolian rugs of the "Transylvanian" type were also kept in other European churches in Hungary, Poland, Italy and Germany, whence they were sold, and reached European and American museums and private collections. In Transylvania, the Brașov Black Church, St. Margaret's Church in Mediaș, and the churches of Sighișoara and Rupea display the largest collection of Transylvanian rugs in their original setting. The collection of the Bistrița church was transferred to Germany by Transylvanian Saxons leaving their homes at the end of the Second World War, and is kept in the depots of the Germanic National Museum in Nuremberg, Germany. Aside from the Transylvanian churches, the Brukenthal National Museum in Sibiu, Romania,[17] the Museum of Fine Arts (Budapest), the Metropolitan Museum of Art, and the Skokloster Castle near Stockholm in Sweden keep important collections of "Transylvanian" rugs.