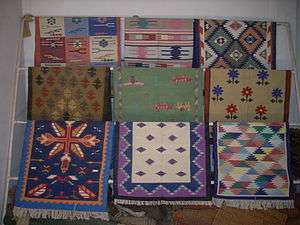 A dhurrie (also durrie or durry) is a thick flat-woven rug or carpet[1] used traditionally in India as floor-coverings.

The concept of dhurrie is different from a rug or carpet, but since the dhurries serve the same purpose as carpet or rugs they can be described as one.

They have a variety of use depending on size, pattern and material. The smallest one is 12" by 12" and is used as a table cover for telephone stands and flower vases. They are also made in sizes that are ideal for doing meditation 24” by 24”, known as an Aasan.

Dhurries used in large political or social gatherings may be as large as 20 feet by 20 feet. Dhurries are easily portable being light weight and foldable. They come in variety of color combinations and patterns catering to the needs of any taste or occasion.

Dhurrries have a low maintenance cost as they do not get infected by Silverfish or other insects responsible for destroying carpets.

Dhurries can be used year round. The cotton dhurrie is warm in winters and cool in summers.

Dhurries are made from four types of materials:

And in variety of combination of all these materials. This material is first converted into thread and then woven into dhurries.

Dhurries are made manually by skilled artisans on a traditional horizontal loom or vertical loom.

In Rajasthan pit looms are also used for weaving in which weaver sits in a pit and feet are used in weaving. The maximum breadth is 24".

Madhya Pradesh dhurries are known for their sturdy character and delightful colours. Rajasthan, Uttar Pradesh, Punjab and Himachal Pradesh,make distinctive type of dhurries. In some part of these states the dhurries make a part of dowry given at the time of a daughter's marriage.

Several important centres of durrie-making in pre-Independence Punjab are now in Pakistan; however, in present-day Punjab, the areas around Ludhiana, Faridkot and Bhatinda are fairly prolific and well-known.

Dhurries made in Rajasthan at Salawas are known as Panja dhurries and are exported on large scale. Khairabad in Uttar Pradesh is a major dhurrie making centre. Citapore Rugs (Sitapur dhurries) made here are based on flat weave technique using horizontal looms. Besides cotton, jute, rayon and chennile dhurries are also made here and exported all over the world. Ikea and Agocha have been sourcing dhurries for their stores from this area.

Dhurries are also made in Navalgund taluk of Karnataka state in India.It has its own geo graphical tag for durry, Navalgund Durries known as Jamkhana in local Kannada language.