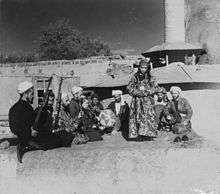 Musicians and a dancing boy (bacha) in Samarkand, ca. 1910 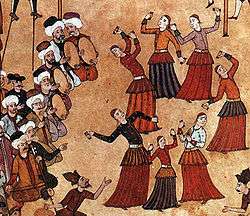 "Köçek troupe at a fair" at Sultan Ahmed's 1720 celebration of his son's circumcision. Miniature from the Surname-i Vehbi, Topkapı Palace, Istanbul.

The traditional dances of the Middle East (also known as oriental dance) span a large variety of folk traditions throughout North Africa, the Middle East, and Central Asia.

"Belly dance" is a Western term applied to raqs sharqi, which is the Arabic for "oriental dance", but strictly a style developed in the interbellum period for professional performance in cabarets and the early Egyptian film industry on the basis of traditional Egyptian dance, by Samia Gamal, Tahiya Karioka, Naima Akef and others.