The IUFRO unites more than 15,000 scientists in almost 700 Member Organizations in over 110 countries. Scientists cooperate in IUFRO on a voluntary basis.[2]

It promotes global cooperation in forest-related research and enhances the understanding of the ecological, economic and social aspects of forests and trees. It disseminates scientific knowledge to stakeholders and decision-makers and contributes to forest policy and on-the-ground forest management. IUFRO’s vision is of science-based sustainable management of the world’s forest resources for economic, environmental and social benefits.

Every five years IUFRO organizes a World Congress with about 2000 participants. The most recent was in Seoul, Korea, in 2010; the next will be in Salt Lake City, United States, in 2014. Between congresses, there are some 70 regional conferences and meetings organized by the individual IUFRO research units (i.e. Divisions, Research Groups and Working Parties, Task Forces, Special Programmes, Projects and Chapters) every year all over the world.[4]

Many joint activities and partnership agreements occur with national governments, regional and global organizations and NGOs. For example, IUFRO is a Scientific Union Member of the International Council for Science (ICSU),[5] a member of the Collaborative Partnership on Forests (CPF), and an observer organization in the Ministerial Conference on the Protection of Forests in Europe (MCPFE process). It has established memoranda of understanding with, for instance, the World Conservation Union (IUCN), the World Wide Fund for Nature (WWF), the International Tropical Timber Organization (ITTO), and International Forestry Students' Association (IFSA).[6]

IUFRO disseminates knowledge via its website iufro.org, the expertise of its officeholders, and a range of publications such as IUFRO News and Noticias de IUFRO, calendar of events, information leaflets, annual reports, Occasional Papers, IUFRO World Series, IUFRO Research Series,[7] and conference proceedings.[8]

GFIS is an internet gateway that allows sharing of forest-related information through a single entry point.[9] These resources are freely searchable online and provide direct access to the original information. All information made available through GFIS is supplied by partner institutions from around the world that host forest information. Today GFIS is an initiative of the Collaborative Partnership on Forests (CPF).[10]

IUFRO's Special Programme for Developing Countries (SPDC) was established in 1983. In order to enhance the ability of research institutions to generate and deliver scientific information and advisory services on forest and trees and their sustainable utilisation IUFRO-SPDC implements the following programme components: training of scientists; collaborative research networking, scientist assistance programme.[11]

In February 1995, IUFRO started a pilot project on forest terminology called SilvaVoc. Its objectives are: to provide bibliographical and consultation services about forest terminologies and terminological activities; to contribute to the harmonization and integration of existing and future terminological data; to make compiled and improved data available in electronic form through computer networks; to produce special glossaries for specific target groups in an appropriate medium of publication.[12]

From 2002-2005, the IUFRO World Forests, Society and Environment (IUFRO-WFSE) special project focused on identifying, monitoring and critically analysing changing paradigms in the forests-society-environment interface, especially as to changes in governance, livelihoods and poverty alleviation, environmental services and plantations. The project continues following the established mission and strategies from 2006-2010.[13]

IUFRO administration is broken down into: a Congress; International Council; Board and Committees; Management Committee; Advisory Council; President and the Vice-Presidents; Executive Director; Finance Officer.

The aim of Task Forces is to strengthen IUFRO activities in specific areas. They contribute to international processes and activities and are established for a limited period of time. Currently, IUFRO Task Forces are dealing with the following topics: Traditional Forest Knowledge; Communicating Forest Science; Illegal Logging and FLEGT; Improving the Lives of People in Forests; Forest Science-Policy Interface; Forests and Water Interactions; Forests and Carbon Sequestration; Forests and Genetically Modified Trees; Endangered Species and Nature Conservation; Forests and Human Health. 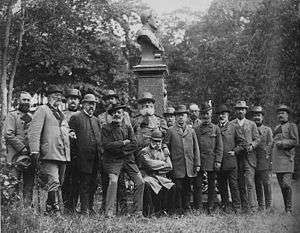 Participants of the 20th Meeting of the German forest research institutes, Eberswalde, Germany, September, 1892. This committee decided on 19 September 1892 the establishment of the International Union of Forest Research Institutes

IUFRO was founded as the “International Union of Forest Experiment Stations” in 1892 by three members: the Association of German Forest Experiment Stations, and the experiment stations of Austria and Switzerland. After World War I, the number of members increased considerably as universities, forestry education centers and other forestry institutions not only from Europe but also from other continents joined. The name of IUFRO was changed to “International Union of Forestry Research Organizations”. World War II interrupted the activities of the Union. Until the 1970s IUFRO grew rapidly with many of the new members coming from developing countries. From the 1980s onwards, IUFRO has been increasingly addressing forest-related social, economic, and ecological problems of global importance. In 2000 the name of IUFRO was changed to “International Union of Forest Research Organizations.”

More recently this organization has stated that forests are under increasing degrees of stress as a result of climate change. Forests could release vast amounts of carbon if temperatures rise 2.5C (4.5F) above pre-industrial levels. Compiled by 35 leading forestry scientists, the report provides what is described as the first global assessment of the ability of forests to adapt to climate change.[15]