The Royal Danish Academy of Sciences and Letters (Danish: Kongelige Danske Videnskabernes Selskab) is a Danish non-governmental science Academy, founded in 1742 for the advancement of science in Denmark. It is based in the Carlsberg Foundation's building at the corner of H. C. Andersens Boulevard and Dantes Plads in central Copenhagen.

The Society was founded on 13 November 1742 by permission of King Christian VI, as a historical Collegium Antiquitatum. It was founded by secretary of state, Count Johan Ludvig Holstein and the history professor Hans Gram. 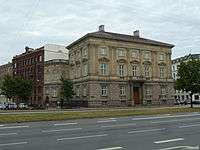 The building on H.C. Andersens Boulevard

The building at 35 H. C. Andersens Boulevard was designed by Vilhelm Petersen in a Neoclassical style.

The Carlsberg Foundation is based in the ground floor while the Royal Academy has the three upper floors. First floor contains the Old Meeting Hall, where the Academy hold their meetings. It is decorated with a large oil painting by Peder Severin Krøyer depicting A meeting in the Royal Scientific Society. There is also a library and rooms for researchers. Second floor contain the Academy's secretariate and archives as the President's, General Secretary's and Editor's offices.Third floor now contains New Meeting Room. It was created in the former attic and book storage in connection with an adaption of the building in 1976. Since 2009, it has access to a roof terrace.[1]

Members of the Academy are researching, lecturing and publishing in nearly all fields of science. The Academy has approximately 250 national and 260 foreign members.