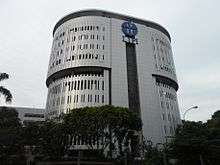 The Indonesian Institute of Sciences (Indonesian: Lembaga Ilmu Pengetahuan Indonesia or LIPI) is the governmental authority for science and research in Indonesia. It consists of 47 research centers in the fields ranging from social to natural sciences.[1]

With growing interest in scientific research, the government of the Dutch East Indies established Natuurwetenschappelijk Raad voor Nederlandsch Indie (Scientific Council of the Dutch East Indies) in 1928. It operates as the country's main research organization until the Japanese occupation in 1942. The Dutch returned to Indonesia and resumed control of the council, the institute was renamed Organisatie voor Natuurwetenschappelijk (OPIPA) (Organisation for scientific research) in 1948.

In August 1967 the government dissolved LEMRENAS and MIPI with Presidential Decree no. 128/1967 and established the current Indonesian Institute of Sciences (LIPI). The new institute runs the operation that was previously covered by LEMRENAS and MIPI.

LIPI has launched and are responsible for several public services related to science, technology and research activities across Indonesia.

LIPI manages 4 botanical garden in Indonesia, which were all developed during the Dutch colonial period:[2]

June 2011: To increase LIPI's reputation around the world, and give Indonesian researchers more international credibility from currently ranked about 220th in the world, LIPI has launched a biannual English-language journal, Review of Indonesian Economic and Business Studies (RIEBS).[4]

Together with Japan's National Institute of Technology and Evaluation, Indonesian Institute of Sciences have significantly increased Indonesia's microbial collection record from 200 to 6,500 between 2003 and 2009 and more than 1,800 microbes are believed to be new discoveries.[5]