The Slovak Academy of Sciences (in Slovak Slovenská akadémia vied, or SAV) is the main scientific and research institution in Slovakia fostering basic and strategic basic research. It was founded in 1942, closed after World War II, and then reestablished in 1953.

Its primary mission is to acquire new knowledge of nature, society and technology, specifically targeted at ensuring scientific basis for the advancement in Slovakia. It comprises 58 scientific institutes and 13 ancillary institutions. The SAV edits 44 scientific and scholarly journals and 100–120 monographs per annum. Moreover, 41 scientific and scholarly societies, which associate scientists and scholars from various disciplines, are affiliated with SAV.

The commencement of modern science in the 16th and 17th centuries resulted in the establishment of new institutions that supplemented classical universities and created a broader forum for fostering science communication. These institutions, which were built on the ancient Platonic traditions, became the starting point of our present day academies of sciences.

Matej Bel’s project, submitted in 1735, marked the first attempt to establish such an institution on the territory of modern Slovakia. He suggested the founding of a Societas litteraria in Bratislava. His project, however, never materialized. In 1792, upon a proposal issued by a group of patriotic philologists, Slovenske ucene tovarisstvo (The Slovak Learned Society) was founded. In 1844, under the impetus of Ludovit Stur, the nationwide cultural association, Tatrin, was instituted.

A few years later, in 1892, Andrej Kmet published in Narodne noviny (National News) his appeal to establish Slovensky vedecky spolok [Slovak Scientific Association], or Slovenska akademia vied [Slovak Academy of Sciences]. This idea led to the formation of Muzealna spolocnost slovenska [Slovak Association of Museums]. On 2 July 1942 the Parliament of the Slovak Republic instituted Slovenska akademia vied an umeni [Slovak Academy of Sciences and Arts], which developed into a representative and, concomitantly, working institution fostering scientific scholarly research. During the post-World War II period the SAVU was transformed into Slovenska akademia vied -Slovak Academy of Sciences (hereinafter the Academy or the SAS as an abbreviation). Its establishment was legally grounded in an act passed by the Slovak National Council on 18 June 1953. The arrangement of its operation was regulated further by appurtenant legislation.

17 November 1989 introduced significant changes at the Academy. Since then, far–reaching transformations enabled the Academy to become similar to counterpart organisations of science and research in advanced countries abroad. 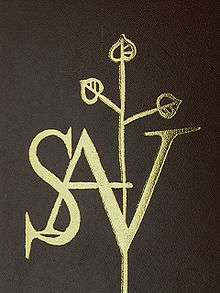 Service mark of the Slovak Academy of Sciences (SAV)

Nowadays, the Slovak Academy of Sciences successfully presents itself nationally and worldwide through the results in basic and applied research. It consists of 69 organisations, of which 48 are budgetary and 21 are subsidised. The Academy publishes 57 scientific and professional journals and 8 yearbooks. There are 51 scientific and scholarly associations, societies and unions affiliated with the SAS, which operate in accordance with the Law on Civic Associations. The Assembly, the Scientific Council, and the Presidium are the Academy’s self-governing bodies.