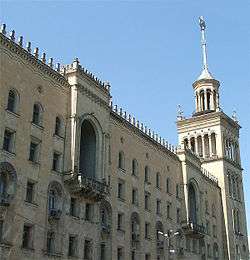 The Georgian National Academy of Sciences (GNAS) (Georgian: საქართველოს მეცნიერებათა ეროვნული აკადემია, translit.: sakartvelos metsnierebata erovnuli ak'ademia) is a main learned society of the Georgia. It was named Georgian SSR Academy of Sciences until November 1990. The Academy coordinates scientific research in Georgia and develops relationship with the academies and scientific centers of foreign countries.[1]

GNAS is a National Scientific Associate of the International Council for Science (ICSU, France).