The modern city of Awaji was established on April 1, 2005, from the merger of the former town of Awaji, absorbing the towns of Tsuna, Higashiura, Hokudan and Ichinomiya (all from Tsuna District).

Kansai University of Nursing and Health Sciences is also located in the city. 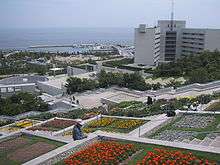 The Awaji City Library serves Awaji. In 1999 this library and the West Bloomfield Library in West Bloomfield, Michigan in Metro Detroit were paired as sister institutions.[1]

Jointly with Minami Awaji and Sumoto, the city operates a low-cost electric bike rental scheme, designed to attract visitors to stay for more than one day in order to explore the island.[2]