Nishinomiya (西宮市, Nishinomiya-shi) is a city located in Hyōgo Prefecture, Japan, between the cities of Amagasaki and Ashiya. On April 1, 2005, the city of Nishinomiya celebrated its 80th anniversary. It is best known as the home of Kōshien Stadium, where the Hanshin Tigers baseball team plays home games and where Japan's annual high school baseball championship is held. It is also the location of Kwansei Gakuin University, a private university founded by American missionaries in the nineteenth century. Nishinomiya is an important commercial and shipping city in the Kansai region with the third largest population in Hyōgo Prefecture.

Nishinomiya City is located in the south-east of Hyōgo Prefecture between the cities of Kobe and Osaka. It is bordered by Osaka Bay to the south, the cities of Amagasaki, Itami and Takarazuka along the Mukogawa and Nigawa rivers to the east and by a part of the Rokko Mountains and Kobe City to the north. The city can be divided into two areas: a mountainous area in the north and a coastal plain in the south. Situated in the middle is Mount Kabuto (309 meters), a landmark of the city. 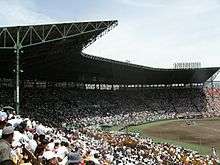 Furuno, a global electronics company, whose main products include marine electronics and medical equipment, has its headquarters in the city.[1]

Since most of the farmland is located within the urban district, Nishinomiya agriculture is in a difficult situation and it worsens every year. Currently, efforts are being made to improve farming in order to make it profitable by growing such marketable products as soft vegetables for the big markets of Osaka and Kobe. Other efforts include effective land use by growing crops in greenhouses using hydroponic techniques and development of techniques for safe products.

Nishinomiya is situated between the major cities of Kobe and Osaka. Luxury neighborhoods are common in this city, especially in areas near Ashiya. Some of the shopping malls in Nishinomiya are the Lalaport Koshien and the Hankyu Nishinomiya Gardens. 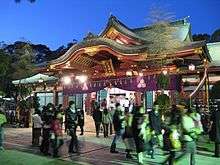