Akashi (明石市, Akashi-shi) is a city located in southern Hyōgo Prefecture, Japan, on the Seto Inland Sea west of Kobe.

Akashi was an important city during Japan's pre-modern period due to the presence of Akashi Castle, headquarters of the Akashi Domain. The city, in its current form, was founded on November 1, 1919.

On July 21, 2001, 11 people were killed and 247 injured in a pedestrian stampede after a fireworks show. Five city and civil officials were subsequently convicted for negligence for not preventing the disaster.[1] 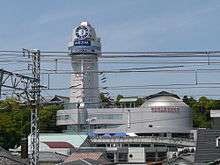 Akashi Municipal Planetarium stands on the meridian of 135 degrees east longitude, that is used to determine Japan Standard Time. Contrary to the name, the terminus of the Akashi-Kaikyo Bridge that connects Honshu to Awaji Island (and thereby to Shikoku) is not in Akashi but in Tarumi-ku, Kōbe.

The remains of Akashi Castle are located just north of Akashi Station and are visible from the station platform.

Akashi is governed by Mayor Hiroto Kitaguchi, an independent. The city assembly has 31 elected members and is dominated by independents.

Yamato Scale, a leading global manufacturer of commercial weighing and packaging equipment is headquartered in the city.[2]

Akashi is well known for Akashiyaki, a kind of takoyaki particular to the region. Small pieces of octopus (tako) are placed inside a ball-shaped mold containing a mixture of flour and eggs and this is then fried. Akashiyaki is often eaten by dipping in a thin soup. Akashi is the site of the Uontana (Uo-no-Tana, 魚の棚, literally "fish-shelf") Fish Market where local fishermen display an array of fresh seafood caught in the Akashi Strait.

The city once had a North Korean school, Akashi Korean Elementary School (明石朝鮮初級学校).[3]

Akashi Park Stadium is a track and field stadium that can hold 20,000 spectators.

The Sanyō Main Line (JR Kobe Line) passes through the city with stations at:

The Sanyo Electric Railway Main Line passes through the city with stations at:

Akashi is twinned with: