Aioi (相生市, Aioi-shi) is a city located between Himeji and Okayama, in Hyōgo Prefecture, Japan. 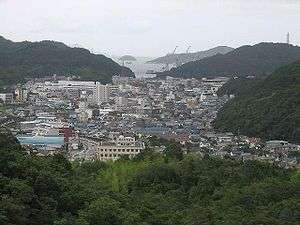 Aioi City was founded on October 1, 1942, and was enlarged to its present size on August 1, 1955. The city's name comes from the name of one of the villages that were merged to create the city. (Curiously, the name of the village was pronounced "Au", but used the same kanji characters as the present-day city.) [1] During the Edo period, these villages were part of the Akō han (fiefdom of feudal lords) of Harima Province.[2]

The main industry in Aioi is shipbuilding, which, despite many years of decline, still maintains a strong presence through Ishikawajima-Harima Heavy Industries (IHI).

Today, Aioi Station serves as a gateway to Harima Science Garden City, which hosts SPring-8, the largest synchrotron in the world, among other scientifically oriented institutes and companies.

On November 2005, the city was mentioned in world news reports after a large daikon radish that grew though the pavement was found slashed.[3][4] According to a city spokesperson, the radish was seen as an inspiration due to "its tenacity and strong will to live."[5] The tenacious daikon, nicknamed "Daichan," has since been celebrated in a children's book.[6] In 2006, a special firework representing the daikon was set off at the annual firework display preceding the dragon boat races.[7]