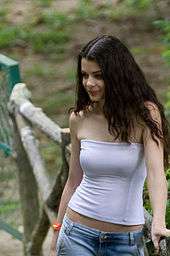 A tube top, colloquially known in the UK as a boob tube,[1] is a shoulderless, sleeveless women's garment that wraps around the upper torso. It is generally tight over the breasts, usually by means of elastic bands at its top and bottom, to prevent it from falling. The tube top's precursor was a beachwear or informal summer garment worn by young girls in the 1950s, that became more widely popular in the 1970s, and returned to popularity in the 1990s and 2000s.[2]

In 2012 Israeli fashion designer Elie Tahari claimed that he helped popularize tube top after his arrival in New York in 1971.[3] The original tube tops, as spotted by Tahari in a New York factory run by Murray Kleid, were elasticated gauze tubes reportedly produced through a factory manufacturing error. Murray ran with this product for years and eventually[3] Tahari bought tubes from Kleid, later setting up his own factory to mass produce tube tops to meet widespread demand.[3]