This article is about the district. For its eponymous headquarters, see Nagapattinam.

Nagapattinam is derived from Nagar, referring to people from Sri Lanka who settled here, and pattinam referring to town.[2][3] The town was also called Cholakula Vallipattinam during the Chola period, when it was one of the important ports. Ptolemy refers to Nagapattinam as Nikam and mentions it as one of the most important trade centres of the ancient Tamil country.[2] This view is doubtful as there is no contemporary evidence to prove the existence of the town as a metropolis in the name of "Nikama" or "Nikam".[4] Nagapattinam was referred to by early writers and the Portuguese as "the city of Coromandel".[2] Appar and Tirugnanasambandar, the 7th-century saint poets refer to the city as Nagai in their verses in Tevaram. The town was originally called "Nagai"; the word Pattinam was attached during the Chola era when the town emerged as an important port.[5]

There are urn burials in and around the city from the Sangam period indicating some level of human habitation.[4] The neighbouring port, Kaveripoompattinam (modern day Poompuhar), was the capital of the Chola kingdom of the Sangam Age, referred to widely in Tamil scriptures like Paṭṭiṉappālai.[4] The early works of Tevaram by the 7th-century poets Appar and Sambandar mention that the town had fortified walls, busy roads, buildings and a busy port.[6] The inscriptions from the Kayarohanswami temple indicate the construction was initiated during the reign of the Pallava king, Narasimha Pallava II (691 – 729 CE).[7] A Buddhist pagoda was built under Chinese influence by the Pallava king and town was frequented by Buddhist travellers.[7] Thirumangai Azhwar, the 9th century vaishnavite saint poet, is believed to have stolen the golden Buddha statue to fund the Ranganthaswamy Temple at Srirangam; the authenticity of the theory is questionable.[7] In the 11th century CE, Chudamani Vihara, a Buddhist monastery was built by Javanese king Sri Vijaya Soolamanivarman with the patronage of Raja Raja Chola.[8] Nagapattinam was the prominent port of Cholas for trade and conquering gateway to the east.

In the early 16th century the Portuguese made commercial contacts with the town and established a commercial centre in 1554 CE. The Portuguese also conducted missionary enterprise in the town.[9] In 1658, the Dutch established an agreement with King Vijaya Nayakkar of Thanjavur on 5 January 1662. Ten villages were transferred from the Portuguese to the Dutch – Nagappattinam Port, Puthur, Muttam, Poruvalancheri, Anthanappettai, Karureppankadu, AzhingiMangalam, Sangamangalam, Thiruthinamangalam, Manjakollai, Nariyankudi. Ten Christian churches and a hospital were built by the Dutch. They also released coins with the name Nagappattinam engraved in Tamil letters. Under an agreement between the first Maratta King Egoji of Thanjavur and the Dutch, Naagappattinam and surrounding villages were handed over to the Dutch on 30 December 1676. In 1690, the capital of Dutch Coromandel moved from Pulicat to Nagapattinam.[9]

This town fell into the hands of the British in 1781 after the two naval battles between British and French fleets were fought off the coast of Negapatam, as it was then known: the first in 1758 as part of the Seven Years' War and the second in 1782 as part of the American Revolutionary War. The town was taken by the British from the Dutch in 1781 (who had been formally brought into the war in 1780).[10] When the Dutch and British reached a peace agreement in 1784, Nagapattinam was formally ceded to the British. 277 villages, with Nagore as the headquarters, were handed over to the East India Company.

From 1799 to 1845 CE Nagapttinam was the headquarters of Tanjore district.[2] Nagapattinam and Nagore were incorporated as a single municipality in 1866 CE.[2] The town remained one of the chief ports to the Madras Presidency. The port suffered decline after the inclusion of Tranquebar and Tuticorin. Nagapattinam was one of the regions severely affected by the tsunami which followed the 2004 Indian Ocean earthquake.

The district of Nagapattinam lies on the shores of the Bay of Bengal between latitude 10.7906°N and Longitude 79.8428°E an area of 2,715 square kilometres (1,048 sq mi).[11] The District capital, Nagapattinam lies on the eastern coast, 350 kilometers down south of the State capital Chennai and of Tiruchirappalli. It has an average elevation of 9 metres (30 ft) above the mean sea level.[11] The district has a coastline of 187 kilometres (116 mi).[11]

The 2004 Indian Ocean earthquake was an undersea megathrust earthquake that occurred on 26 December 2004, with an epicentre off the west coast of Sumatra, Indonesia, triggering a series of devastating tsunamis along the coasts of most landmasses bordering the Indian Ocean.[12] Nagapattinam district was the most affected part in Tamil Nadu, accounting for 6,064 off the 8,009 casualties in the state,[13] predominantly from the fishing community who resided close to the seashore. The damage impacted the fishing industry, as most of the boats were damaged by the inundation.[14] The immediate aftermath created a lull in tourism.[15] 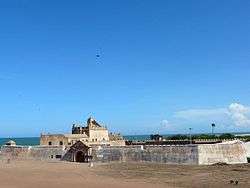 In 2006 the Ministry of Panchayati Raj named Nagapattinam one of the country's 250 most backward districts (out of a total of 640).[17] It is one of the six districts in Tamil Nadu currently receiving funds from the Backward Regions Grant Fund Programme (BRGF).[17]

There are a total of 891 elementary schools, 185 middle schools, 83 high schools and 79 higher secondary schools in the district.[11]

The Collector is the administrative head of each district and is the principle representative of the government for the district. The Collector's main responsibilities include revenue administration, Executive Magistracy, maintaining law and order, licensing and regulatory functions, disaster management, civil supplies, public distribution, social welfare, excise, transport, mining, labour laws, elections, legal affairs, census, general administration, treasury management and co-ordination with various departments of the state and central governments. The Collector is also the head of various committees formed at the district level for the various central and state government schemes.[20]

There are 32 districts in Tamil Nadu, each divided for revenue administration purposes into revenue divisions, which are further divided into Talukas. Each of these Talukas has a list of revenue villages and is headed by a Tahsildar.[21] Developmental administration of the district is carried out by Panchayat Unions (or Town Panchayats) in rural areas. These panchayat unions have a set of panchayat villages under them. In urban areas, the governance is done by municipal corporations, municipalities or town panchayats based on the size of the town; each of these has a set of wards.[21] The functions of the municipality are devolved into six departments: general administration/personnel, Engineering, Revenue, Public Health, Town Planning, and Information Technology (IT).[22] The municipalities are administered by a Municipal Commissioner, who is the executive head.[22] The legislative powers are vested in a body of elected members from each ward of the municipality. The legislative body is headed by an elected Chairperson assisted by a Deputy Chairperson.[23]

Nagapattinam District was formerly a part of Thanjavur District. The district boundary is shared by Tiruvarur, Karaikal, Tanjore and Cuddalore districts. Its population at the 2001 Census was nearly 1.5 million. The district has seven taluks, eleven administrative blocks, eight town panchayats, and four municipalities.[21] Five of the talukas are coastal, and all are named after their main towns, which are their administrative centres. From north to south, they are Sirkazhi, Tharangambadi, Mayiladuthurai (non-coastal), Nagapattinam, Kilvelur, Thirukkuvalai (non-coastal), and Vedaranyam. It is bordered on the east by the Bay of Bengal and on the south by the Palk Strait. On the coast between Tharamgambadi and Nagapattinam lies the small district of Karaikal, an enclave belonging administratively to the Puducherry Union Territory. This is the only district in Tamil Nadu to be formed out of two disjoint regions. The district headquarters, Nagapattinam, is located in the southern part which is less populated than the northern one.

There are a total of six legislative assembly constituencies in the district, namely, Sirkazhi, Poompuhar, Mayiladuthurai, Kilvelur, Nagapattinam and Vedaranyam.[40] Out of these, Sirkazhi and Kilvelu constituencies are reserved for Scheduled Caste (SC).[40]

Tourism plays a key economic role for the town even though fishing is the major occupation.

Kayarohanaswami Temple, a Hindu temple dedicated to Shiva, is located in Nagapattinam. The temple has been in existence from the 6th century CE and has been revered by the verses of Tevaram, the 7th–8th century Saiva canonical work by Appar, Sambandar and Sundarar.[41] The temple is one of the seven temples of the Thyagaraja cult, classified as Saptha Vidangam, where the deity Thyagaraja is believed to portray different dance styles.[42] The temple is also known for the shrine of Neelayadakshi, the consort of Kayarohanaswami.[41] 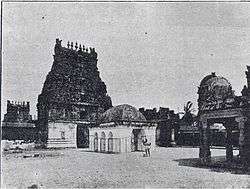 Kayarohanaswami Temple – one of the oldest temples in the town

Soundararajaperumal Temple is a Hindu temple in Nagapattinam dedicated to Vishnu. It is one of the Divya Desams, the 108 temples of Vishnu reverred in Nalayira Divya Prabandham by the Tirumangai Azhwar, one of the 12 poet saints called Alwars of the 6th–9th century.[41] The other prominent Hindu temples in the district are Sikkal Singaravelan Temple at Sikkal, Vedaranyeswarar Temple at Vedaranyam, Ettukudi Murugan Temple and Koothanur Maha Saraswathi Temple.[43]

Nagore Durgah, built in the 16th century is one of the major landmarks of the town

Nagore Durgha, a 16th-century minaret located in Nagore, is an important pilgrimage centre of the town. The Kanduri festival is a 14-day event celebrated for the annual urs(anniversary) of the saint Hajrath Shahul Hamid (1490–1579 CE), for whom the minaret was built.[44] The festival is celebrated in commemoration of the anniversary of the saint's death, and pilgrims from various religions participate in the rituals and rites. The festival is also seen as a sacred exchange between Hindus and Muslims expressing solidarity of mixed faith in the region.[45] It is believed that 60 percent of the shrines were built by Hindus and historically the minaret has many domestic and international visitors.[46] There are three other prominent mosques; one near Nagai Pudhur Road, one near the new bus stand and another at Moolakadai Street.[41]

Velankanni is a pilgrimage centre located 10 km (6.2 mi) from Nagapattinam. The town is known for the Basilica of Our Lady of Good Health, a Roman Catholic church built during the 17th century. Pilgrimage to the basilica is common during September when people of many faiths, especially Hindus, Muslims and Christians of all denominations visit the basilica.[43]