Pudukkottai (Tamil:புதுக்கோட்டை) is the administrative headquarters of Pudukkottai District in the South Indian state of Tamil Nadu. Located on the banks of River Vellar, it has been ruled, at different times, by the Early Pandyas, Thondaimans, and the British. It is situated about 395 kilometres (245 mi) southwest of the state capital Chennai and about 55 kilometres (34 mi) southwest of Tiruchirappalli. The people in the city are employed majorly in teritiary sector activities. Tamil Nadu's first women Asiad Santhi Soundarajan is from Pudukkottai.[1]

Being the district headquarters, Pudukkottai accommodates the district administration offices, government educational institutes, colleges and schools. Pudukkottai is a part of Pudukkottai constituency and elects its member of legislative assembly every five years, and a part of the Tiruchirappalli constituency that elects its member of parliament. The city is administered by a selection-grade municipality established in 1912 as per the Municipal Corporation Act. The city covers an area of 21.25 km2 and had a population of 143745 in 2011. Roadways is the major mode of transport to the city, while it has also got rail connectivity. The nearest airport is Tiruchirappalli International Airport, located at a distance of 45 km from the city. 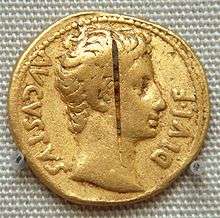 Coin of the Roman emperor Augustus from the Pudukottai hoard (British Museum).

After becoming the ruler of Pudukottai, Thondaiman fought against the Nayaks of Tanjore in support of the Nayaks of Madurai and conquered Thirukkattupalli, a very important place. Then there was a direct clash between the Thondaimans of Pudukottai and the Nayaks, rulers of Tanjore.[3] Thondaiman conquered the west of Thirukkattupalli. The next ruler, Raja Vijaya Reghunatha Raya Thondaiman, helped the Arcot Nawab against Hyder Ali, the ruler of Mysore. He was also loyal to the British Government. After some time, when Hyder Ali’s army tried to enter Pudukkottai, Thondaiman's army defeated them and drove Hyder’s army away. Thondaiman captured Kilanilai and Aranthangi. He helped the British government against Tipu Sultan.

Pudukkotai finally came under formal British protection. This was arguably unavoidable, since the Thondaimans were much menaced in that period by a resurgent Mysore, ruled by Hyder Ali and Tipu Sultan. When Tipu Sultan sought to leverage the power of the French against his British adversaries, Pudukkotai, in common with its neighbours, such as Thanjavur and Travancore, found it expedient to ally with the British.[4]

Raja Rajagopala Thondaiman (1928–1948), the last and ninth in the line of Thondaiman rulers, was selected by the British Government and was crowned when he was six years old. After Indian independence in 1947, the Pudukkottai Princely State was amalgamated with the Indian Union on April 3, 1948 and became a division in Tiruchirappalli district. The long history of the Thondaimans' rule came to an end. 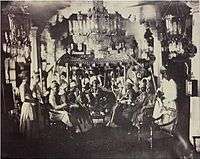 Thondaiman King in his Durbar, Pudukkottai, 1858. 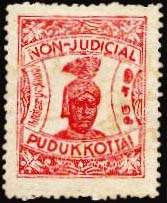 The coat of arms of Pudukkottai state

Pudukkottai became a princely state of British India under the political authority of Madras Presidency. The state had an area of 4663 Sq.miles and in 1901, a population of 380,000. The Rajas of Pudukkotai were entitled to a 17-gun salute. The last Thondaiman raja of Pudukkottai acceded to newly-independent India in 1948, and the state became a division of Tiruchirappalli District of Madras State. The state was reorganised twice in the succeeding decade, taking its present form in 1956; it was renamed Tamil Nadu in 1968. On 14 January 1974, the present Pudukkottai District was formed from parts of Tiruchirappalli and Thanjavur districts.[5]

Pudukkottai is located at 10°23′N 78°49′E﻿ / ﻿10.38°N 78.82°E﻿ / 10.38; 78.82 in the valley of river Vellar. The city has a semi-arid climate with high temperatures throughout the year, and relatively low rainfall. The city is located in Pudukkottai district of the South Indian state, Tamil Nadu, at a distance of 390 km (240 mi) from Chennai. Pudukkottai has a plain terrain with a few rocky hills intersped in the outskirts. Urugumalai, Athimalai, Chennaimalai are the hills that surround the city. The rivers that flow in Pudukkottai are Amaravathy, Noyal, Bhavani, and Kaveri. There are no notable mineral resources available in and around the city. Red loam and red sandy are the types of soil found in the town. Paddy, groundnut and sugarcane are the major crops in the region. Pudukkottai experiences hot and dry weather throughout the year. The temperature ranges from a maximum of 38.7 °C (101.7 °F) to a minimum of 19.6 °C (67.3 °F). Like the rest of the state, April to June are the hottest months and December to January are the coldest. Pudukkottai receives an average of 919.4 mm (36.20 in) of rainfall yearly. The South west monsoon, with an onset in June and lasting up to August, brings scanty rainfall. Bulk of the rainfall is received during the North East monsoon in the months of October, November and December. The municipality covers an area of 21.25 km2 (21,250,000 m2)[6][7][8]

The Thondaiman king, Vijaya Raghunatha rebuilt the town based on the principles of town planning so that the main streets were laid intersecting at right angles with the palace at the centre.[7] Out of the total area, 80.85% of the land is marked developed and 19.15% of the city remains undeveloped. Residential areas make up 60.1% of the town's total area while commercial enterprises and industrial units make up 4.43% and 1.47% respectively.[13] The population density is not uniform throughout the town. It is high in the centre and lower in the peripheral areas such as Sivagandapuram, Ganesh nagar and the Tamil Nadu Housing Area. The density ranges from 200-300 persons per hectare in the central part of the town and 16 - 55 persons per hectare (PPH) in the peripheral areas with low density Hindus form the majority of the urban population, followed by Muslims and Christians. Tamil is the main language spoken in the city, but the use of English is relatively common; English is the medium of instruction in most educational institutions and offices in the service sector.[9]

Pudukottai is the headquarters of the Pudukkottai District. The town was constituted as a third-grade municipality in 1912, promoted to first-grade during 1963 and selection-grade from 1998. The Pudukottai municipality has 42 wards and there is an elected councillor for each of those wards.[19] The functions of the municipality are devolved into six departments: general administration/personnel, Engineering, Revenue, Public Health, city planning and Information Technology (IT). All these departments are under the control of a Municipal Commissioner who is the executive head.[20] The legislative powers are vested in a body of 42 members, one each from the 42 wards.[21] The legislative body is headed by an elected Chairperson assisted by a Deputy Chairperson.[22]

Law and order in the city in maintained by the Pudukottai sub division of the Tamil Nadu Police headed by a Deputy Superintendent. There are four police stations in the town, with one of them being an all women police station. There are special units like prohibition enforcement, district crime, social justice and human rights, district crime records and special branch that operate at the district level police division headed by a Superintendent of Police.[41]

There are two national highways namely the NH 336 Trichy - Ramanathapuram road and NH 226 Perambalur - Manamadurai road that pass via Pudukkottai. There are two state highways that pass via the town - SH 26 Trichy - Mimisal road and SH 71 Musiri - Sethubavachatram road. The other major district roads connect Pudukkottai to other parts of the district. The Pudukkottai bus stand is a B-grade bus stand located in the centre of the town. The State Express Transport Corporation operates long distance buses connecting the city to important cities like Chennai, Coimbatore, Tiruppur, Karur, Palani, Erode, Velankanni, Tiruvannamalai, Nagercoil, Tiruchendur and Thoothukudi. There are frequent intercity buses operated by the TNSTC Kumbakonam division to cities like Tiruchchirapalli, Thanjavur, Madurai, Manapparai, Aranthangi, Karaikkudi, Devakottai, Pattukkottai, Ponnamaravathi, Rameswaram, Chennai and Kumbakonam.[43][44]

The nearest local and international airport is the Tiruchirapalli International Airport, located 45 km from the town. 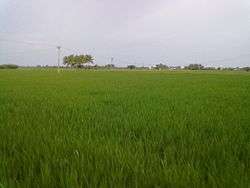 A Paddy field in Regunathapuram Village of Pudukkottai district

The SIPCOT Industrial Complex is located on Tiruchirappalli - Rameswaram National Highways (NH 210). This Industrial complex is well connected by Road, Rail and Air. It was established in 1980. The allotment of land commenced in 1982 to accommodate Engineering and General Industries. The total extent of complex area is 421.10 acres (1.7041 km2).

There are 5,385 irrigation tanks available in this district, of which 172 tanks are system tanks fed by Grand Anaikat Channel and the remaining are rain fed tanks. There are about 55,137 wells in the district catering an area of 7791 Ha. Paddy is the major crop of this district. 90000 Ha. of area is covered under paddy, out of which 135000 Ha. of area is fed with Kaveri Mettur Project through G.A. canal. The remaining area is well and tank fed. The present productivity level is 4.985 Mt. of Paddy /Ha.Other than Paddy, Groundnut is the major crop in this district which is mainly cultivated under rain fed condition. Groundnut is being cultivated in 36000 Ha. as rain fed crop and 8000 Ha. under irrigated condition Millet, Pulse, Cotton, Sugarcane, Gingelly are the other crops cultivated in this district.

Electricity supply to Pudukkottai is regulated and distributed by the Tamil Nadu Electricity Board (TNEB). A Chief Distribution engineer is stationed at the regional headquarters.[48] Water supply is provided by the Pudukkottai Municipality from the Cauvery river through Jeyapuram head water works located 86 km (53 mi) away and Ammaiyappatti water works located 9.06 km (5.63 mi). In the period 2000–2001, a total of 7 million litres of water was supplied everyday for households in the town.[49] As per the municipal data for 2011, about 30-35 metric tonnes of solid waste were collected from Pudukkottai every day by door-to-door collection and subsequently the source segregation and dumping was carried out by the sanitary department of the Pudukkottai municipality. The coverage of solid waste management in the town by the municipality had an efficiency of 100% as of 2001.[50] There is no underground drainage system in the town and the sewerage system for disposal of sullage is through septic tanks, open drains and public conveniences.[51]

The municipality maintained a total of 191 km (119 mi) of storm water drains in 2011: 55 km (34 mi) pucca drains and 136 km (85 mi) open drains.[52] As of 2011, there were a total of 31 hospitals, municipal dispensary, private dispensaries and private general clinics and five clinical labls that take care of the health care needs of the citizens.[53] As of 2011, the municipality maintained a total of 4,039 street lamps: 631 sodium lamps, 3,407 tube lights and one high mast beam lamp.[54] The municipality operates one weekly market, two daily vegetable markets and one daily fish market that cater to the needs of the town and the rural areas around it.[55]