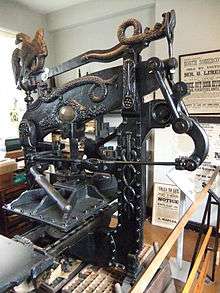 Columbian press at the Museum of Lincolnshire Life

The Columbian press was invented by George Clymer, probably in 1813, inspired in some measure by the earlier Stanhope press. It was designed to allow a whole newspaper page to be printed in a single pull. The press worked by a lever system, similar to that of the Stanhope press and quite different from the toggle action of the slightler later English Albion press. Clymer's new iron press was first advertised in April 1814. It went on to be manufactured in great numbers for over a century, chiefly in the United Kingdom but also in other European countries (a few were manufactured in America, but no surviving examples are recorded). It is sometimes, incorrectly, referred to as the 'Eagle' press due to the characteristic bald eagle counterweight which usually sits on the top lever. Some Columbians have the counterweight in another form (a simple ornament, a lamp, urn, or orb). 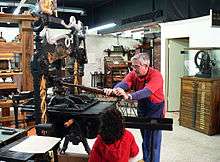 A Columbian press at the International Printing Museum in Carson, CA.