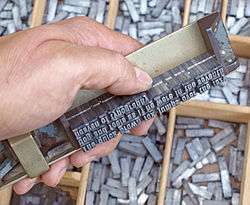 In letterpress printing and typesetting, a composing stick is a tool used to assemble pieces of metal type into words and lines, which are then transferred to a galley before being locked into a forme and printed. Many composing sticks have one adjustable end, allowing the length of the lines and consequent width of the page or column to be set, with spaces and quadrats of different sizes being used to make up the exact width. Early composing sticks often had a fixed measure, as did many used in setting type for newspapers, which were fixed to the width of a standard column, when newspapers were still composed by hand.

The compositor takes the pieces of type from the boxes (compartments) of the type case and places them in the composing stick, working from left to right and placing the letters upside-down with the nick to the top.