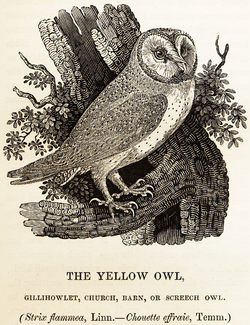 Wood engraving is a printmaking and letterpress printing technique, in which an artist works an image or matrix of images into a block of wood. Functionally a variety of woodcut, it uses relief printing, where the artist applies ink to the face of the block and prints using relatively low pressure. By contrast, ordinary engraving, like etching, uses a metal plate for the matrix, and is printed by the intaglio method, where the ink fills the valleys, the removed areas. As a result, wood engravings deteriorate less quickly than copper-plate engravings, and have a distinctive white-on-black character.

Thomas Bewick developed the wood engraving technique at the end of the 18th century. His work differed from earlier woodcuts in two key ways. First, rather than using woodcarving tools such as knives, Bewick used an engraver's burin (graver). With this, he could create thin delicate lines, often creating large dark areas in the composition. Second, wood engraving traditionally uses the wood's end grain—while the older technique used the softer side grain. The resulting increased hardness and durability facilitated more detailed images.

Wood-engraved blocks could be used on conventional printing presses, which were going through rapid mechanical improvements during the first quarter of the 19th century. The blocks were made the same height as, and composited alongside, movable type in page layouts—so printers could produce thousands of copies of illustrated pages with almost no deterioration. The combination of this new wood engraving method and mechanized printing drove a rapid expansion of illustrations in the 19th century. Further, advances in stereotype let wood-engravings be reproduced onto metal, where they could be mass-produced for sale to printers.

By the mid-19th century, many wood engravings rivaled copperplate engravings.[1] Wood engraving was used to great effect by 19th-century artists such as Edward Calvert, and its heyday lasted until the early and mid-20th century when remarkable achievements were made by Eric Gill, Eric Ravilious and others. Though less used now, the technique is still prized in the early 21st century as a high-quality specialist technique of book illustration, and is promoted, for example, by the Society of Wood Engravers, who hold an annual exhibition in London and other British venues. 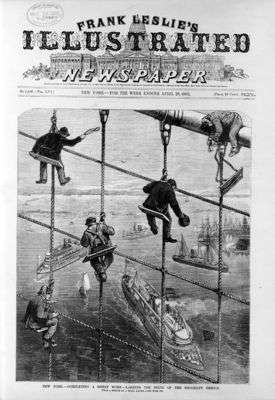 This is a large wood engraving on an 1883 cover of Frank Leslie's Illustrated Newspaper. Such news engravings were composed of multiple component blocks, combined to form a single image, so as to divide the work among a number of engravers.

In 15th and 16th-century Europe, woodcuts were a common technique in printmaking and printing, yet their use as an artistic medium began to decline in the 17th century. They were still made for basic printing press work such as newspapers or almanacs. These required simple blocks that printed in relief with the text—rather than the elaborate intaglio forms in book illustrations and artistic printmaking at the time, in which type and illustrations were printed with separate plates and techniques.

The beginnings of modern wood engraving techniques developed at the end of the 18th and beginning of the 19th century, with the works of Englishman Thomas Bewick. Bewick generally engraved harder woods, such as boxwood, rather than the woods used in woodcuts, and he engraved the ends of blocks instead of the side.[1] Finding a woodcutting knife not suitable for working against the grain in harder woods, Bewick used a burin (or graver), an engraving tool with a V-shaped cutting tip.[1] From the beginning of the nineteenth century Bewick's techniques gradually came into wider use, especially in Britain and the United States.

Alexander Anderson introduced the technique to the United States. Bewick's work impressed him, so he reverse engineered and imitated Bewick's technique—using metal until he learned that Bewick used wood.[2] There it was further expanded upon by his students, Joseph Alexander Adams,

Besides interpreting details of light and shade, from the 1820s onwards, engravers used the method to reproduce freehand line drawings. This was, in many ways an unnatural application, since engravers had to cut away almost all the surface of the block to produce the printable lines of the artist's drawing. Nonetheless, it became the most common use of wood engraving.

Examples include the cartoons of Punch magazine, the pictures in the Illustrated London News and Sir John Tenniel's illustrations to Lewis Carroll's works, the latter engraved by the firm of Dalziel Brothers. In the United States, wood-engraved publications also began to take hold, such as Harper's Weekly.

Frank Leslie, a British-born engraver who had headed the engraving department of the Illustrated London News, immigrated to the United States in 1848, where he developed a means to divide the labor for making wood engravings. A single design was divided into a grid, and each engraver worked on a square. The blocks were then assembled into a single image. This process formed the basis for his Frank Leslie's Illustrated Newspaper, which competed with Harper's in illustrating scenes from the American Civil War. 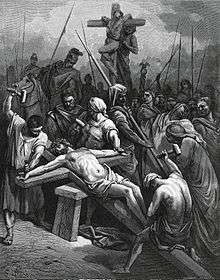 The modified technique in the wood engraving Crucifixion of Jesus by Gustave Doré.

By the mid-19th century, electrotyping was developed, which could reproduce a wood engraving on metal.[3] By this method, a single wood-engraving could be mass-produced for sale to printshops, and the original retained without wear.

Until 1860, artists working for engraving had to paint or draw directly on the surface of the block and the original artwork was actually destroyed by the engraver. In 1860, however, the engraver Thomas Bolton invented a process for transferring a photograph onto the block.

At about the same time, French engravers developed a modified technique (partly a return to that of Bewick) in which cross-hatching (one set of parallel lines crossing another at an angle) was almost entirely eliminated. Instead, all tonal gradations were rendered by white lines of varying thickness and closeness, sometimes broken into dots for the darkest areas. This technique appears in engravings from Gustave Doré's drawings.

Towards the end of the 19th century, a combination of Bolton's 'photo on wood' process and the increased technical virtuosity initiated by the French school gave wood engraving a new application as a means of reproducing drawings in water-colour wash (as opposed to line drawings) and actual photographs. This is exemplified in illustrations in The Strand Magazine during the 1890s. With the new century, improvements in the half-tone process rendered this kind of reproductive engraving obsolete. In a less sophisticated form, it survived in advertisements and trade catalogues until about 1930. With this change, wood engraving was left free to develop as a creative form in its own right, a movement prefigured in the late 1800s by such artists as Joseph Crawhall II and the Beggarstaff Brothers.

Timothy Cole was a traditional wood engraver, executing copies from museum paintings on commission from magazines such as The Century Magazine. 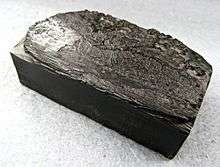 This original engraved wood block by Thomas Bewick is made to type height so it can be printed together with text on a letterpress.

The block shown from above. Notice the circular area marking damaged and repaired wood on the left next to the figure of a man.

Print made with the block. The repaired circular area is visible on the right between the man and the dog.

Wood engraving blocks are typically made of boxwood or other hardwoods such as lemonwood or cherry. They are expensive to purchase because end-grain wood must be a section through the trunk or large bough of a tree. Some modern wood engravers use substitutes made of PVC or resin, mounted on MDF, which produce similarly detailed results of a slightly different character.

The block is manipulated on a "sandbag" (a sand-filled circular leather cushion). This helps the engraver produce curved or undulating lines with minimal manipulation of the cutting tool.

Wood engravers use a range of specialized tools. The lozenge graver is similar to the burin used by copper engravers of Bewick's day, and comes in different sizes. Various sizes of V-shaped graver are used for hatching. Other, more flexible, tools include the spitsticker, for fine undulating lines; the round scorper for curved textures; and the flat scorper for clearing larger areas.

Wood engraving is generally a black-and-white technique. However, a handful of wood engravers also work in colour, using three or four blocks of primary colours—in a way parallel to the four-colour process in modern printing. To do this, the printmaker must register the blocks (make sure they print in exactly the same place on the page). Recently, engravers have begun to use lasers to engrave wood. 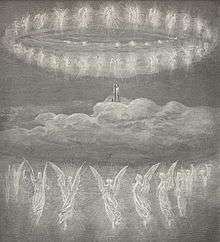 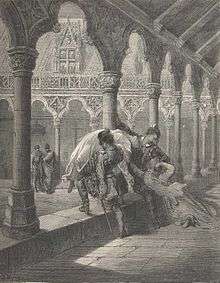 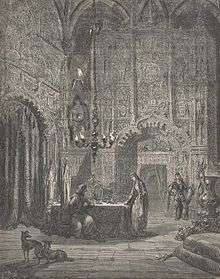 Another Don Quijote engraving by Doré, who preferred to work with wood engravings.