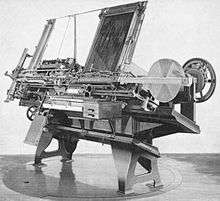 The Paige Compositor was an invention developed by James W. Paige (1842–1917) between 1872 and 1888. It was designed to replace the human typesetter of a lead type-composed printing form with a mechanical arm.[1][2] However, the machine was not nearly as precise as it should have been and never turned a profit because of its complexity and continual need for adjustment based upon trial and error.[3][4]

The Paige typesetting machine is notable for substantial investment that prominent writer Mark Twain made into the failed endeavor: $300,000 ($5,935,833 today). Twain, a former printer, invested not only the bulk of his book profits but also a large portion of the inheritance of Olivia Clemens, his wife.[4] Many point to his over-investment in the Paige typesetting machine and other inventions as the cause of not only his family's financial decline but also the decline of his wit and humor.[5]

Only two machines were built. One was donated by Cornell University for a scrap metal drive during World War II. The other machine survives and is displayed at the Mark Twain House in Hartford, Connecticut.[6]