For a medical case that defines the type, see index case. 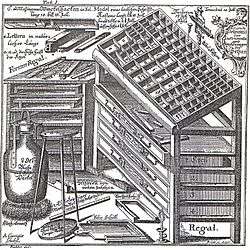 An 18th-century type case, with various tools for typesetting

Modern, factory-produced movable type was available in the late nineteenth century. It was held in the printing shop in a job case, a drawer about 2 inches high, a yard wide, and about two feet deep, with many small compartments for the various letters and ligatures. The most popular and commonly used job case design in America was the California Job Case, which took its name from the Pacific Coast location of the foundries that made the case popular.[2] These cases allowed type to be compactly transported.