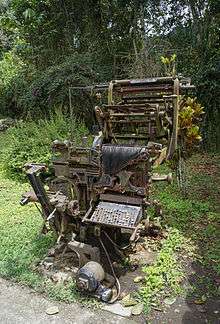 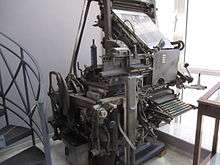 Intertype Machine on display at the Historical Museum of Crete

Originally, most of their machines were rebuilt Linotypes. By 1917, however, Intertype was producing three models of its own machine. Most of the original patents for the Linotype had expired and so the basic works of the Intertype were essentially the same, though incorporating at least 51 improvement patents. The standard Intertype could cast type up to thirty points and they also offered a "Composing Stick Attachment" that allowed their caster to be used to cast headlines up to 60 points.[2]

Despite initial liquidity problems, Intertype was quite successful in later years, producing mixer machines, high speed machines, and the first photo-type compositor. In 1957, Intertype merged with Harris-Seybold, a manufacturer of presses and paper cutters, to become Harris-Intertype Corporation. After the merger, the Harris-Intertype Fotosetter was introduced. It was the first photo-typesetting machine and was based upon the standard Intertype machine, replacing the brass type matrices with small film negatives and instead of casting, used these to expose photographic paper.

Throughout its history, Intertype machines were typically better built and engineered than Mergenthaler's, with simpler, more effective mechanisms. However, while both Mergenthaler and Lanston Monotype were known for producing new and innovative type designs, virtually all of Intertype's typefaces were derivatives of, or supplied to them, by the Bauer Type Foundry. The only type designer of note associated with Intertype was Edwin W. Shaar, who pioneered in adapting script faces for machine composition.[3]

These typefaces were produced by Intertype:

The Berlin branch of Intertype was actually more active in producing new designs than the parent company. The following matrices were produced there: