Golding & Company is a defunct American manufacturer of platen printing presses established in 1869 by William Hughson Golding (1845-1916)[1] in the Fort Hill area of Boston, Massachusetts.[2] 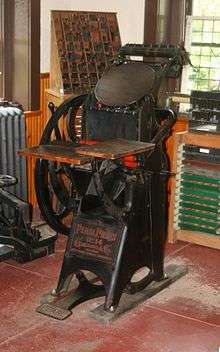 Pearl letterpress used by the Roycroft art and craft community

Before 1895, Golding hired Henry Lewis Bullen to print its house organ which increased sales of the Pearl.[2] In 1906, Goldings factories moved to Franklin, Massachusetts; showrooms remained in Boston.[2]

William Golding died in 1916 but his two sons continued the enterprise.[2] In 1918, Golding was acquired by American Type Founders (ATF).[1] The Pearl continued to be made and sold by the Golding Press Division of ATF.[2] In 1927, Thomson National Company[3] (manufacturers of Colt's Armory Press) bought Golding from ATF.[1]

In 1936, the Craftsmen Machinery Company of Dedham, Massachusetts somehow acquired jigs/patterns for the 7x11 Improved Pearl, selling them as the CMC Jobber until 1955.[2]