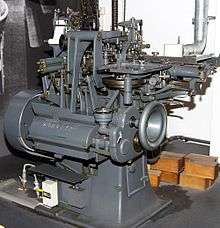 The Monotype system is system for printing by hot-metal typesetting from a keyboard. The two most significant differences from the competing Linotype machine are:

A Monotype operator enters text on a Monotype keyboard, on which characters are arranged in the QWERTY arrangement of a conventional typewriter, but with this arrangement repeated multiple times. Thus, the typesetter moves his hands from one group of keys to another to type uppercase or lowercase, small capitals, italic uppercase or italic lowercase, and so on.

When the text nears the right margin, a drum on the keyboard indicates codes which are punched on the paper tape with special keys to indicate how the line is to be justified. The tape is then taken to a Monotype caster, which reads the tape and produces a column of justified type from which the text entered on the keyboard can be printed.

In 1885, the American inventor Tolbert Lanston applied for a patent on a typesetting system that included the basic Monotype keyboard, but which produced a printing surface through a cold-stamping method. In 1890, he filed a subsequent patent, which covered the Monotype caster.

In 1897, the Lanston Monotype Corporation opened a branch in England, which later became an independent company. 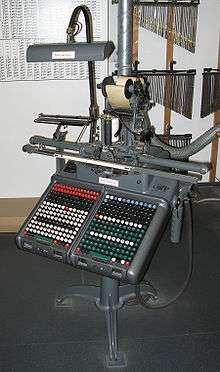 A Monotype keyboard; the tape reel being produced is at the top

A Monotype keyboard allows a keyboard operator to prepare a perforated paper tape, called ribbon, that will direct the casting of type separately from its actual casting. The keyboard on which the operator types is removable, as is a set of keybars under the keys; the keybars, corresponding to each key, determine which holes will be punched in the tape. During operation, two sets of keys and keybars are placed in two side-by-side trays on the keyboard. The keybars are adjustable, so that the coding of the keys can be changed. Keytops also are replaceable, so that the keyboard can be reconfigured.

For the Monotype caster to produce types with the shape of the desired character on their face, a matrix with that character incised in it must be moved to the top of the mold in which the type slug will be cast. This is achieved by placing a rectangular array of brass matrices, each of which is one-fifth inch square, in a holder, called the matrix-case. Originally, it contained 225 matrices, in 15 rows and 15 columns; later versions of the Monotype caster expanded that first to 15 rows and 17 columns (255 matrices), and then to 16 rows and 17 columns (272 matrices).

The width of a type slug cast on the Monotype varied from 3 to 18 units. (A special attachment was required to reduce the minimum from 4 units to 3 units.) A width of 18 units corresponded to the set width of the typeface. Thus, if a typeface was described as “12 set”, 18 units would correspond to one pica em. (A pica em is a horizontal distance equal to 12 points.)

The 12-point size of a typeface could also be 12 set, the 11-point size could be 11 set, and so on. But this was not always true: some typefaces could be somewhat wider or narrower than the standard, and many typefaces were modified to be slightly wider in smaller sizes. The set size could be varied in units of ¼ point.

In order that the Monotype caster would know ahead of time how wide to make the spaces in a given line of text, the tape was placed on the caster so as to be read in the reverse order from that in which the text was typed.

Justification was obtained with a system of wedges. The caster has an accuracy of 2000 parts of an inch (in modern terms, 2000 dpi).

This wedge made a similar movement as the diecase, and the rows are polished according to the layout and the set of the used font.

This wedge can be laid in 15 different positions; the difference between two positions is .0005 inch.

This wedge can be laid in 15 different positions; the difference between two positions is .0075 inch.

Using this wedge added 1, 2, or 3 units to the cast character. The attachment used for this needed some extra coding.

This wedge was used when the justification were in use.

The combined actions of all these wedges governed the opening of the mould-blade, and in this way the width of the character or space to be cast was adjusted.

The position of the 0005- and 0075-wedges was put onto the right position during the codes that marked the start of casting the line. Two codes were used during a procedure that was called:

Single justification was used to change the position of the justification wedges whenever needed, without transferring the line to the galley. This procedure was also used to adjust the spaces in more than one segment within a line. In this way it was possible to cast complete time-tables.

Besides this, there was also the possibility to cast high-spaces. Those high-spaces could support any overhanging character. When a character could not be cast at the desired width where it was put into the matrix-case, the character could be cast. A part of the sign would not be supported by the ingot. Directly after the character was cast, one or more high-spaces of 5 or 6 units were cast, to add to the desired width and to support the sign, in order to resist the pressure during the printing-process.

There was a second 16×17 system, in which both the matrix-case and the wedge had 16 possible positions. This system was rather expensive, because of all the extra wedges needed that could not be used on other machines. The 16th row was coded with a code of two or three letters. Of this system there have been two variants: the extra row was coded with either MNH or MNK.[1]