For the planarity measure in graph theory, see Graph skewness. 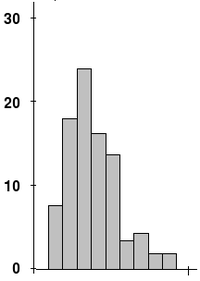 Example distribution with non-zero (positive) skewness. These data are from experiments on wheat grass growth.

In probability theory and statistics, skewness is a measure of the asymmetry of the probability distribution of a real-valued random variable about its mean. The skewness value can be positive or negative, or even undefined.

The qualitative interpretation of the skew is complicated. For a unimodal distribution, negative skew indicates that the tail on the left side of the probability density function is longer or fatter than the right side – it does not distinguish these two kinds of shape. Conversely, positive skew indicates that the tail on the right side is longer or fatter than the left side. In cases where one tail is long but the other tail is fat, skewness does not obey a simple rule. For example, a zero value means that the tails on both sides of the mean balance out overall; this is the case for a symmetric distribution, but is also true for an asymmetric distribution where the asymmetries even out, such as one tail being long but thin, and the other being short but fat. Further, in multimodal distributions and discrete distributions, skewness is also difficult to interpret. Importantly, the skewness does not determine the relationship of mean and median. In cases where it is necessary, data might be transformed to have a normal distribution.

Skewness in a data series may sometimes be observed not only graphically but by simple inspection of the values. For instance, consider the numeric sequence (49, 50, 51), whose values are evenly distributed around a central value of 50. We can transform this sequence into a negatively skewed distribution by adding a value far below the mean, e.g. (40, 49, 50, 51). Similarly, we can make the sequence positively skewed by adding a value far above the mean, e.g. (49, 50, 51, 60).

Relationship of mean and median

The skewness is not directly related to the relationship between the mean and median: a distribution with negative skew can have its mean greater than or less than the median, and likewise for positive skew.

In the older notion of nonparametric skew, defined as

where µ is the mean, ν is the median, and σ is the standard deviation, the skewness is defined in terms of this relationship: positive/right nonparametric skew means the mean is greater than (to the right of) the median, while negative/left nonparametric skew means the mean is less than (to the left of) the median. However, the modern definition of skewness and the traditional nonparametric definition do not in general have the same sign: while they agree for some families of distributions, they differ in general, and conflating them is misleading.

The skewness of a random variable X is the third standardized moment γ1, defined as:[4][5]

where μ is the mean, σ is the standard deviation, E is the expectation operator, μ3 is the third central moment, and κt are the tth cumulants. It is sometimes referred to as Pearson's moment coefficient of skewness,[5] or simply the moment coefficient of skewness,[4] but should not be confused with Pearson's other skewness statistics (see below). The last equality expresses skewness in terms of the ratio of the third cumulant κ3 to the 1.5th power of the second cumulant κ2. This is analogous to the definition of kurtosis as the fourth cumulant normalized by the square of the second cumulant. The skewness is also sometimes denoted Skew[X].

Skewness can be expressed in terms of the non-central moment E[X3] by expanding the previous formula,

Skewness can be infinite, as when

where the third cumulants are infinite, or as when

where the third cumulant is undefined.

Starting from a standard cumulant expansion around a normal distribution, one can show that

. This shows that the skewness of the sum is smaller, as it approaches a Gaussian distribution in accordance with the central limit theorem. Note that the assumption that the variables be independent for the above formula is very important because it is possible even for the sum of two Gaussian variables to have a skewed distribution (see this example).

For a sample of n values, a natural method of moments estimator of the population skewness is[6]

Another common definition of the sample skewness is[6]

is the unique symmetric unbiased estimator of the third cumulant and

is the symmetric unbiased estimator of the second cumulant (i.e. the variance).

In general, the ratios

are both biased estimators of the population skewness

has an expected value of about 0.32, since usually all three samples are in the positive-valued part of the distribution, which is skewed the other way.) Nevertheless,

each have obviously the correct expected value of zero for any symmetric distribution with a finite third moment, including a normal distribution.

Under the assumption that the underlying random variable

is normally distributed, it can be shown that

. The variance of the skewness of a random sample of size n from a normal distribution is[7][8]

An approximate alternative is 6/n, but this is inaccurate for small samples.

has the smaller variance of the two estimators, with

where m2 in the denominator is the (biased) sample second central moment.[6]

is the version found in Excel and several statistical packages including Minitab, SAS and SPSS.[9]

Skewness has benefits in many areas. Many models assume normal distribution; i.e., data are symmetric about the mean. The normal distribution has a skewness of zero. But in reality, data points may not be perfectly symmetric. So, an understanding of the skewness of the dataset indicates whether deviations from the mean are going to be positive or negative.

D'Agostino's K-squared test is a goodness-of-fit normality test based on sample skewness and sample kurtosis.

Other measures of skewness 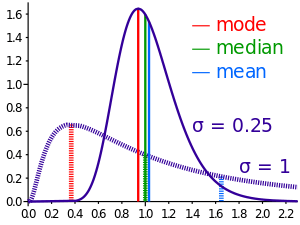 Comparison of mean, median and mode of two log-normal distributions with different skewness.

Other measures of skewness have been used, including simpler calculations suggested by Karl Pearson[10] (not to be confused with Pearson's moment coefficient of skewness, see above). These other measures are:

The Pearson mode skewness,[11] or first skewness coefficient, is defined as

The Pearson median skewness, or second skewness coefficient,[12][13] is defined as

The latter is a simple multiple of the nonparametric skew.

When writing it as

, it is easier to see that the numerator is the average of the upper and lower quartiles (a measure of location) minus the median while the denominator is (Q3-Q1)/2 which (for symmetric distributions) is the MAD measure of dispersion.

Other names for this measure are Galton's measure of skewness,[18] the Yule–Kendall index[19] and the quartile skewness ,

where F is the cumulative distribution function. This leads to a corresponding overall measure of skewness[21] defined as the supremum of this over the range 1/2 ≤ u < 1. Another measure can be obtained by integrating the numerator and denominator of this expression.[20] The function γ(u) satisfies −1 ≤ γ(u) ≤ 1 and is well defined without requiring the existence of any moments of the distribution.[20]

Groeneveld & Meeden have suggested, as an alternative measure of skewness,[20]

where μ is the mean, ν is the median, |…| is the absolute value, and E() is the expectation operator. This is closely related in form to Pearson's second skewness coefficient.

Use of L-moments in place of moments provides a measure of skewness known as the L-skewness.[23]

A value of skewness equal to zero does not imply that the probability distribution is symmetric. Thus there is a need for another measure of asymmetry that has this property: such a measure was introduced in 2000.[24] It is called distance skewness and denoted by dSkew. If X is a random variable taking values in the d-dimensional Euclidean space, X has finite expectation, X' is an independent identically distributed copy of X, and

denotes the norm in the Euclidean space, then a simple measure of asymmetry is

The medcouple is a scale-invariant robust measure of skewness, with a breakdown point of 25%. It is the median of the values of the kernel function

taken over all couples

is the median of the sample

Adjusting the Tests for Skewness and Kurtosis for Distributional Misspecifications. Working Paper Number 01-0116, University of Illinois. Forthcoming in Comm in Statistics, Simulation and Computation.2016 1-15