Martin Trevor Heinrich (born October 17, 1971) is an American politician and businessman, the junior United States Senator for New Mexico, in office since 2013. From 2009 to 2013 Heinrich was the U.S. Representative for New Mexico's 1st congressional district. He is a member of the Democratic Party. Heinrich won the Senate seat vacated by retiring Senator Jeff Bingaman in 2012. Heinrich was mentioned as a possible nominee for vice president in 2016 under Democratic presidential nominee Hillary Clinton.[1] However fellow Missourian and Senator Tim Kaine from Virginia was later selected for the ticket.[2]

Martin Trevor Heinrich was born in Fallon, Nevada, a town located in the state's western portion, not far from Reno and the state capital of Carson City. Heinrich is the son of Shirley A. (née Bybee), a seamstress, and Peter C. Heinrich, a utility company lineman.[3][4] Raised as a Lutheran, Heinrich and his parents are of German ancestry. Now based in Albuquerque, Heinrich grew up in the town of Cole Camp, Missouri, located near Missouri's fifth largest city, Columbia.[5]

Heinrich was educated and went to local public schools in Cole Camp, then moved to nearby Columbia in 1989 to attend the University of Missouri. He graduated in 1995 with a bachelor's degree in mechanical engineering,[4] and later left his native Missouri, settling in Albuquerque, New Mexico to take graduate courses at the University of New Mexico.[6] After a brief stint doing mechanical drawings,[4] Heinrich worked as an AmeriCorps fellow in New Mexico.[7]

From 1996 to 2001, he served as executive director of the Cottonwood Gulch Foundation, a New Mexico non-profit organization dedicated to educating young people on natural science and the environment.[6] In 2002, Heinrich founded his own public affairs consulting firm.[4][6]

Heinrich served on the Albuquerque City Council from 2003 to 2007, which included one term as City Council President in 2006.[8] As a city councilman, he stated that his goals were to reduce crime, raise the minimum wage and create new jobs. He also advocated the use of wind and solar power.[6]

In February 2006, he was appointed by Governor Bill Richardson to be the state's Natural Resources Trustee.[9]

In the general election, Heinrich faced Bernalillo County Sheriff Darren White, whom Heinrich's campaign focused on linking to President George W. Bush.[13] Heinrich also called for energy independence and an end to the war in Iraq.[13] He defeated White, 56%-44%, carrying three of the district's five counties: Bernalillo (56%), Sandoval (56%), and Valencia (53%). White won Santa Fe (64%) and Torrance (57%) counties.[14] Upon his swearing in on January 3, 2009, he became the first Democrat to represent the district. The district had been in Republican hands since New Mexico was split into districts in 1969, but has become increasingly friendly to Democrats in recent years; it has not supported a Republican for president since 1988.

Heinrich was challenged by Republican Jon Barela, who told Politico he did not believe Heinrich reflected the district, saying he was too far left on budget and spending issues.[15] During the 2010 campaign, Roll Call reported that the Democratic Congressional Campaign Committee assigned a lobbyist to aid in the reelection campaigns of possibly vulnerable house members to help in fundraising, messaging and campaign strategy.[16] Heinrich was elected to a second term, defeating Barela 52%-48%, and carrying two of the district's counties: Bernalillo (53%) and Sandoval (51%). Barela won Santa Fe (67%), Torrance (61%), and Valencia (53%) counties.[17] 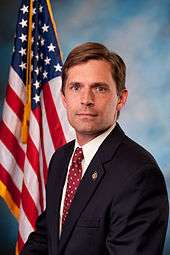 On January 14, 2009, Heinrich was elected to a six-month term as class president by the House Democratic freshmen.[18] He co-sponsored the Stop the Congressional Pay Raise Act, which would cancel an automatic $4,700 salary raise for members of Congress.[19]

Heinrich has identified himself as an environmentalist throughout his career. He served as Executive Director of the Cottonwood Gulch Foundation,[24] a New Mexico non-profit organization dedicated to educating young people on natural science and the environment, and founded his own public affairs consulting firm.[6]

Later, as a member of the Albuquerque City Council, he advocated for the use of wind and solar power.[6] In February 2006, he was appointed by Governor Bill Richardson to be the state's Natural Resources Trustee.[9] He also served on the executive committee of the Sierra Club's Rio Grande Chapter.[25] In August 2011, he received the Sierra Club's first endorsement of the 2012 election cycle.[25][26] He opposes construction of the Keystone Pipeline. He supports cap-and-trade legislation.[27]

In 2008, Heinrich stated, "I am not supportive of gay marriage, but I do believe that everybody in the United States has the same civil rights in front of the government. So I think it's important that civil rights that are available to heterosexual couples should be available to every single gay couple who also wants to make the same sort of commitments."[28]

After his 2012 Senate primary opponent, Hector Balderas, announced his support for same-sex marriage,[28] Heinrich's staff released a statement to the New Mexico Independent newspaper stating, "Martin has supported gay marriage for some time. I just don't think he was asked about it. Thanks for asking!"[29] He was an original cosponsor of Congressman Jerry Nadler's 2009 legislation to repeal the Defense of Marriage Act.[30]

Heinrich opposed legislation (HR 45) that would have re-instated the expired Federal Assault Weapons Ban.[31] Heinrich supported bills to create a national standard for the concealed carrying of firearms across state lines, and co-sponsored legislation that would ease the restrictions on the sales of firearms across state lines.[32] The National Rifle Association endorsed Heinrich during the 2010 congressional election. At that time, he received a grade of "A" from the NRA on his stance with regards to Second Amendment rights.[33]

In 2008, Heinrich was criticized by the New Mexico Republican Party for his work on the creation of the Ojito National Wilderness, which they said amounted to unregistered lobbying. Heinrich responded that the work was advocacy that did not require lobbying disclosure.[34]

Heinrich was a member of the House Armed Services Committee.[35] During his time in Congress, Heinrich has maintained strong opposition to the war in Iraq, and supports a swift end of combat operations in Afghanistan.[36]

In 2011, he voted against the National Defense Authorization Act conference report because he objected to language requiring that suspected foreign terrorists be taken into custody by the military instead of civilian law enforcement authorities.[37]

Heinrich announced that he would leave the House to run for the United States Senate seat held by Jeff Bingaman, who retired at the end of his term.[38] In March, Politico reported that Al Gore had signed a fundraising letter for Heinrich.[39] Heinrich defeated State Auditor Hector Balderas in the Democratic primary.[40] Heinrich faced Republican Heather Wilson, his predecessor in Congress, in the general election on November 6, 2012. He defeated Wilson, 51% to 45%.

On September 27, 2013, Heinrich voted to restore funding for the Patient Protection and Affordable Care Act as part of an amendment to legislation funding government operations for 45 days, and which also omitted House-passed language prioritizing debt payments if Congress fails to increase the nation’s borrowing limits.[42]

In 2014, Heinrich and Republican Senator Jeff Flake of Arizona traveled to a small island called Eru in the Marshall Islands. The Discovery Channel sent a film crew to document their trip and plan to air the film for a show called Rival Survival. Heinrich and Flake had to survive for six days with few resources, including no natural sources of drinkable water. After the trip, Heinrich told reporters that he and Flake decided to go on the trip to demonstrate that politicians from different political parties can work together, and in their case, to survive.[44][45]