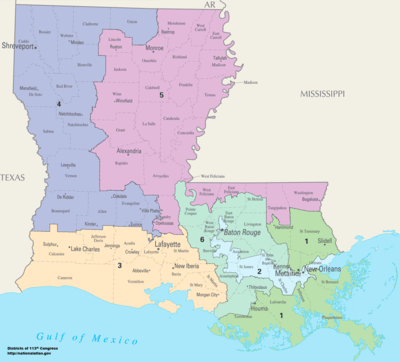 List of members of the Louisianian United States House delegation, their terms in office, district boundaries, and the district political ratings according to the CPVI. The delegation has a total of 6 members, including 5 Republicans and 1 Democrat.

Tables showing membership in the Louisiana federal House delegation throughout history of statehood in the United States.

The first non-voting delegate took his seat on December 1, 1806.

Statehood was achieved and a representative elected on April 30, 1812.

A fourth seat was added following the 1840 census.

A fifth seat was added following the 1860 census. However, the Civil War prevented them from being seated until July 18, 1868.

A sixth seat was added following the 1870 census. From 1873 to 1875, that extra seat was elected at-large statewide. Starting in 1875, however, the state was redistricted into six districts.

A seventh seat was added following the 1900 census.

After the 1910 census, Louisiana's delegation reached its largest size, eight seats, which it held for 80 years.

After the 1990 census, Louisiana lost one seat.

After the 2010 census, Louisiana lost one seat due to stagnant population growth.

Tables showing membership in the Louisiana federal Senate delegation throughout history of statehood in the United States.

As of April 2015, there are four former U.S. Senators from the U.S. State of Louisiana who are currently living at this time, three from Class 2 and one from Class 3.