The Republican Study Committee (RSC) is a caucus of 172 conservative members of the Republican Party in the United States House of Representatives. Though the primary functions of the Republican Study Committee vary from year to year, it has always pushed for significant cuts in non-defense spending, spearheaded efforts to pass free trade agreements, advocated socially conservative legislation, and supported the right to keep and bear arms. It has proposed an alternative budget every year since 1995. It has unveiled its plan to balance the budget without increasing income taxes. Its alternative budget proposals are regularly praised by the editors of National Review, a leading conservative journal of opinion. After over 10 years at RSC's helm, Executive Director Paul Teller was fired in December 2013 for divulging member conversations.[4]

The RSC's key legislative initiatives are detailed in the American Taxpayer Bill of Rights,[5] unveiled in March 2007.

The RSC was founded in 1973 by Paul Weyrich and other conservative activists to keep a watch on the House Republican leadership, which they saw at the time as too moderate. Their formation mirrored the rise of the Democratic Study Group, a liberal force in the Democratic Caucus founded in 1959. The group's first chairman was Phil Crane of Illinois. The group briefly dissolved in 1995 after the Republicans won control of the House for the first time in 40 years when Newt Gingrich abolished it and other similar groups.

However, it was almost immediately refounded as the Conservative Action Team (CATs) by Dan Burton of Indiana (the last chairman of the original RSC), Sam Johnson of Texas, John Doolittle of California and Ernest Istook of Oklahoma. The four founders alternated as chairmen throughout the next two Congresses until David McIntosh of Indiana became chairman in 1998. When he resigned from the chairmanship in 2000 to focus on his run for governor of Indiana, Johnson reassumed the chairmanship. John Shadegg of Arizona became chairman in 2001, renaming it the RSC soon after taking over. Shadegg increased the group's membership from 40 members in 2001 to 70 members in 2003. Sue Myrick of North Carolina was the first woman to serve as chair from 2003 to 2005. Mike Pence of Indiana served as chairman from 2005 to 2007 and Jeb Hensarling of Texas served as chairman from 2007 to 2009. Tom Price of Georgia succeeded Hensarling in 2009. After the Republicans regained control of Congress in the 2010 elections, Jim Jordan of Ohio was elected chairman of the RSC. After the 2012 elections, Steve Scalise of Louisiana served as chairman until his election as House Majority Whip in July 2014. He was replaced by Rob Woodall of Georgia. In November 2014, Bill Flores of Texas was elected chairman of the group for the 114th Congress.

Paul Teller spent over 10 years as Executive Director of RSC. He was fired in December 2013 by Chairman Steve Scalise for divulging member conversations.[4] Teller had been working with two outside groups in opposition to a budget deal forged by Paul Ryan and Patty Murray.[6]

The organization has had ties to outside groups allied with conservative elements of the Republican Party, such as the National Rifle Association, the Heritage Foundation, Focus on the Family, Concerned Women for America, the conservative magazine National Review, and the libertarian Cato Institute.

A subgroup of the committee, the Values Action Team, coordinates legislation with religious organizations, including the Christian right. It has been headed by Joe Pitts of Pennsylvania since its formation in 1997.

On June 16, 2010 the committee issued a press release critical of the administration of U.S. President Barack Obama for negotiating an agreement with energy company BP to bypass a $75 million federal cap on oil companies' liability for oil spills. The statement called the agreement requiring BP to set aside $20 billion to pay damage claims a "Chicago-style political shakedown" by the White House.[8]

In July 2013, the Republican Study Committee barred Heritage Foundation employees from attending its weekly meeting in the Capitol, reversing a decades-old policy, over disagreements about the farm bill.[9] 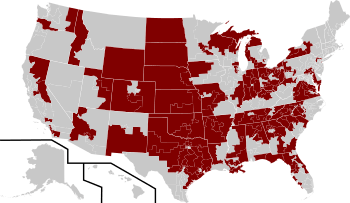 Map of House caucus members during the 113th Congress 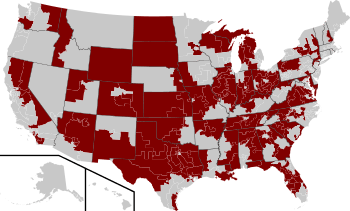 Map of House caucus members during the 112th Congress

NOTE: Italics means the Representative retired or was defeated in his/her primary or general election