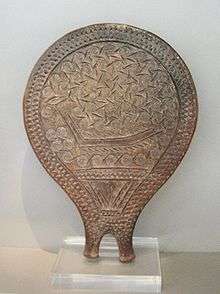 Frying-pan with incised decoration of a ship. Early Cycladic II, Chalandriani, Syros 2800–2300 BC 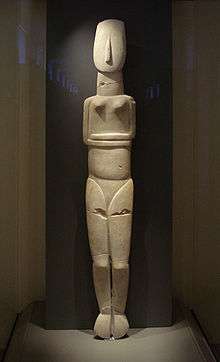 Cycladic civilization (also known as Cycladic culture or Cycladic period) is an Early Bronze Age culture of the Cyclades, Greece, in the Aegean Sea, spanning the period from approximately 3200–2000 BC.[1] 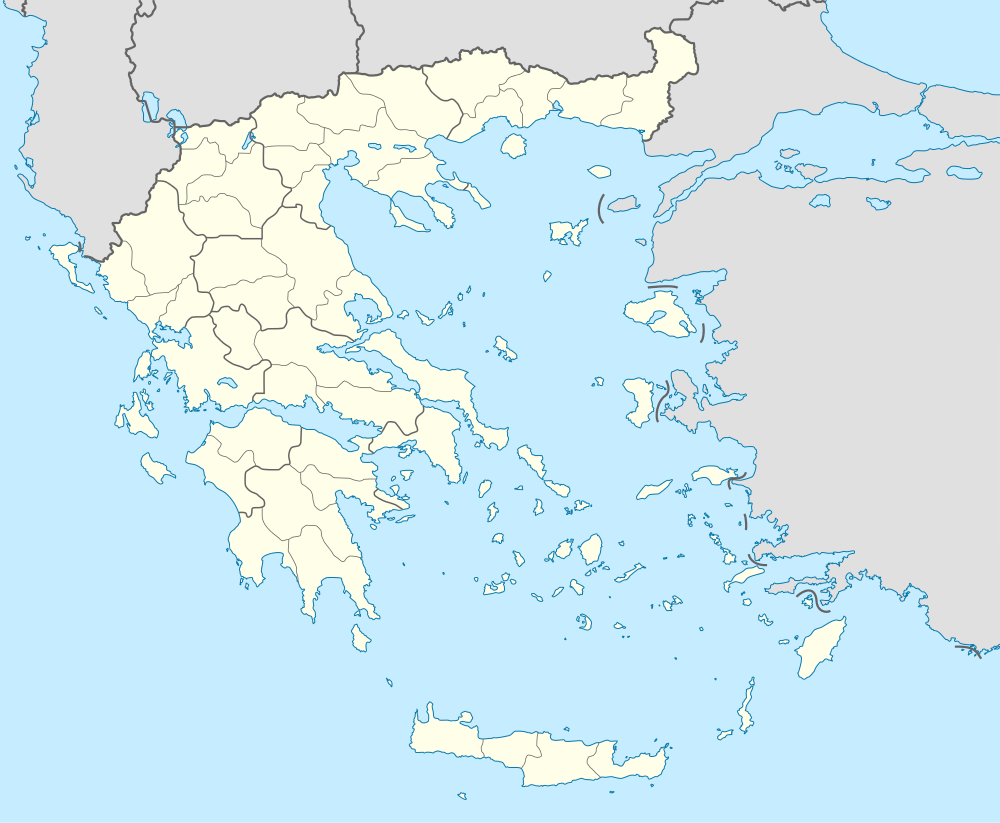 The significant Late Neolithic and Early Bronze Age Cycladic culture is best known for its schematic flat female idols carved out of the islands' pure white marble centuries before the great Middle Bronze Age ("Minoan") culture arose in Crete, to the south. These figures have been stolen from burials to satisfy the Cycladic antiquities market since the early 20th century. Only about 40% of the 1,400 figurines found are of known origin, since looters destroyed evidence of the rest.

A distinctive Neolithic culture amalgamating Anatolian and mainland Greek elements arose in the western Aegean before 4000 BC, based on emmer wheat and wild-type barley, sheep and goats, pigs, and tuna that were apparently speared from small boats (Rutter). Excavated sites include Saliagos and Kephala (on Keos), which showed signs of copper-working. Each of the small Cycladic islands could support no more than a few thousand people, though Late Cycladic boat models show that fifty oarsmen could be assembled from the scattered communities (Rutter). When the highly organized palace-culture of Crete arose, the islands faded into insignificance, with the exception of Delos, which retained its archaic reputation as a sanctuary through the period of Classical Greek civilization (see Delian League).

The chronology of Cycladic civilization is divided into three major sequences: Early, Middle and Late Cycladic. The early period, beginning c. 3000 BC segued into the archaeologically murkier Middle Cycladic c. 2500 BC. By the end of the Late Cycladic sequence (c. 2000 BC) there was essential convergence between Cycladic and Minoan civilization.

There is some tension between the dating systems used for Cycladic civilization, one "cultural" and one "chronological". Attempts to link them lead to varying combinations; the most common are outlined below:

The first archaeological excavations of the 1880s were followed by systematic work by the British School at Athens and by Christos Tsountas, who investigated burial sites on several islands in 1898–99 and coined the term "Cycladic civilization". Interest then lagged, but picked up in the mid-20th century, as collectors competed for the modern-looking figures that seemed so similar to sculpture by Jean Arp or Constantin Brâncuși. Sites were looted and a brisk trade in forgeries arose. The context for many of these Cycladic Figurines has thus been mostly destroyed; their meaning may never be completely understood. Another intriguing and mysterious object is that of the Cycladic frying pans.

Early Cycladic culture evolved in three phases, between c. 3300 and 2000 BC, when it was increasingly submerged in the rising influence of Minoan Crete. Excavations at Knossos on Crete reveal an influence of Cycladic civilization upon Knossos in the period 3400 to 2000 BC as evidenced from pottery finds at Knossos.[3]