Attic Greek is the main Greek dialect that was spoken in ancient Attica, which includes Athens. Of the ancient dialects, it is the most similar to later Greek and is the standard form of the language that is studied in ancient-Greek language courses. Attic Greek is sometimes included in the Ionic dialect. Together, Attic and Ionic are the primary influences on Modern Greek.

Greek is a branch of the Indo-European language family, which includes English. In historical times, Greek already existed in several dialects (see article on Greek dialects), one of which was Attic.

The earliest written records in Greek date from the 16th to 11th centuries BC and exist in an archaic writing system, Linear B, which belongs to the Mycenaean Greeks. The distinction between Eastern and Western Greek is believed to have arisen by Mycenaean times or before. Mycenaean Greek represents an early form of Eastern Greek, a main branch to which Attic also belongs. Because of the gap in the written record between the disappearance of Linear B, around 1200 BC, and the earliest inscriptions in the later Greek alphabet, around 750 BC,[2] the further development of dialects remains opaque. Later Greek literature wrote about three main dialects: Aeolic, Doric, and Ionic. Attic was part of the Ionic dialect group. "Old Attic" is used for the dialect of Thucydides (460-400 BC) and the dramatists of 5th-century Athens; "New Attic" is used for the language of later writers.[3]

Attic Greek persisted until the 3rd century BC, when it was replaced by its similar but more universal offspring, (ἡ κοινὴ διάλεκτος (hē koinē diálektos)) "the common dialect". The cultural dominance of the Athenian Empire and the later adoption of Attic Greek by king Philip II of Macedon (382-336 BC), father of the conqueror, Alexander the Great, were key to the eventual victory of Attic over other Greek dialects and the spread of Koine Greek, throughout Alexander's Hellenic empire. The rise of Koine is conventionally marked by the accession in 285 BC of Greek-speaking Ptolemy II, who ruled from Alexandria, Egypt and launched the Alexandrian period, when the city of Alexandria and its expatriate Greek-medium scholars flourished.[4]

In its day, the original range of the spoken Attic dialect included Attica, Euboea, some of the central Cyclades islands, and the northern coast of Thrace (Chalcidice). The closely related "Ionian" was spoken along the western and northwestern coasts of Asia Minor (modern Turkey) on the east side of the Aegean Sea. Eventually, the texts of literary Attic were widely studied far beyond their homeland, first in the classical civilizations of the Mediterranean (Ancient Rome and the Hellenistic world), and later in the Muslim world, Europe, and wherever European civilization was spread in other parts of the world.

The earliest Greek literature, which is attributed to Homer and is dated to the 8th or 7th centuries BC, is written in "Old Ionic" rather than Attic. Athens and its dialect remained relatively obscure until the constitutional changes that led to democracy in 594 BC, which was the beginning of the classical period and of Athenian influence.

The first extensive works of literature in Attica are the plays of the dramatists Aeschylus, Sophocles, Euripides and Aristophanes in the 5th century BC. The military exploits of the Athenians led to some universally read and admired history, as found in the works of Thucydides and Xenophon. Slightly less known because they are more technical and legal are the orations by Antiphon, Demosthenes, Lysias, Isocrates, and many others. The Attic Greek of the philosophers Plato (427-347 BC) and his student Aristotle (384-322 BC) dates to the period of transition between Classical Attic and koine.

Students who learn Ancient Greek usually begin with the Attic dialect and continue, depending upon their interests, to the koine of the New Testament and other early Christian writings, to the Homeric Greek of Homer and Hesiod or the Ionic Greek of Herodotus and Hippocrates. 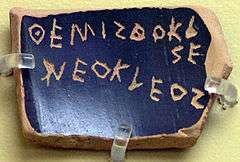 A ballot voting against Themistocles, son of Neocles, under the Athenian Democracy (see ostracism). The text is an example of the epichoric alphabet; note that the last two letters of Themistocles are written in a boustrophedon manner and that E is used for both long and short e.

Attic Greek, like other dialects, was originally written in a local variant of the Greek alphabet. According to the classification of archaic Greek alphabets, which was introduced by Adolf Kirchhoff,[5] the old-Attic system belongs to the "eastern" or "blue" type, as it uses the letters ψ and Χ with their classical values (/ps/ and /kʰ/), unlike "western" or "red" alphabets, which used Χ for /ks/ and expressed /kʰ/ with Ψ. In other respects, Old Attic shares many features with the neighbouring Euboean alphabet (which is "western" in Kirchhoff's classification).[6] Like the latter, it used an L-shaped variant of lambda (

) and an S-shaped variant of sigma (

). It lacked the consonant symbols xi (Χ) for /ks/ and psi (Ψ) for /ps/, expressing these sound combinations with "ΧΣ" and "ΦΣ" respectively. Moreover, like most other mainland Greek dialects, Attic did not yet use omega (Ω) and eta (Η) for the long vowels /ɔ:/ and /ɛ:/. Instead, it expressed the vowel phonemes /o, oː, ɔː/ with the letter Ο (which corresponds with classical Ο, ΟΥ, Ω) and /e, eː, ɛː/ with the letter Ε (which corresponds with Ε, ΕΙ, and Η in later classical orthography). Moreover, the letter Η was used as heta, with the consonantal value of /h/ rather than the vocalic value of /ɛː/.

In the 5th century, Athenian writing gradually switched from this local system to the more widely used Ionic alphabet, native to the eastern Aegean islands and Asia Minor. By the late 5th century, the concurrent use of elements of the Ionic system with the traditional local alphabet had become common in private writing, and in 403 BC, it was decreed that public writing would switch to the new Ionic orthography, as part of the reform following the Thirty Tyrants. This new system, also called the "Eucleidian" alphabet, after the name of the archon Eucleides, who oversaw the decision,[7] was to become the Classical Greek alphabet throughout the Greek-speaking world. The classical works of Attic literature were subsequently handed down to posterity in the new Ionic spelling, and it is the classical orthography in which they are read today.

However, Proto-Greek ā → Attic ē after w (digamma), deleted by the Classical Period.[8]

Proto-Greek and other dialects' /u/ (English food) became Attic /y/ (pronounced as German ü, French u) and represented by y in Latin transliteration of Greek names.

In the diphthongs eu and au, upsilon continued to be pronounced [u].

Attic contracts more than Ionic does. a + e → long ā.

Attic ē (from ē-grade of ablaut or Proto-Greek ā) is sometimes shortened to e:

Attic deletes one of two vowels in a row, called hyphaeresis (ὑφαίρεσις).

Proto-Greek and Doric t before i or y → Attic-Ionic s (palatalization).

Proto-Greek w (digamma) was lost in Attic before historical times.

Attic retained Proto-Greek h- (from debuccalization of Proto-Indo-European initial s- or y-), but some other dialects lost it (psilosis "stripping", "de-aspiration").

Attic-Ionic places an n (movable nu) at the end of some words that would ordinarily end in a vowel, if the next word starts with a vowel, to prevent hiatus (two vowels in a row).

In addition to singular and plural numbers, Attic Greek had the dual number. This was used to refer to two of something and was present as an inflection in nouns, adjectives, pronouns and verbs (any categories inflected for number). Attic Greek was the last dialect to retain it from older forms of Greek, and the dual number had died out by the end of the 5th century BC.

With regard to declension, the stem is the part of the declined word to which case endings are suffixed. In the alpha or first declension feminines, the stem ends in long a, which os parallel to the Latin first declension. In Attic-Ionic the stem vowel has changed to ē in the singular, except (in Attic only) after e, i or r. For example, the respective nominative, genitive, dative and accusative singular forms are gnome, gnomes, gnome(i), gnomen, "opinion" but thea, theas, thea(i), thean, "goddess".

The plural is the same in both cases, gnomai and theai, but other sound changes were more important in its formation. For example, original -as in the nominative plural was replaced by the diphthong -ai, which did not change from a to e. In the few a-stem masculines, the genitive singular follows the second eclension: stratiotēs, stratiotou, stratiotēi, etc.

In the omicron or second declension, mainly masculines (but with some feminines), the stem ends in o or e, which is composed in turn of a root plus the thematic vowel, an o or e in Indo-European ablaut series parallel to similar formations of the verb. It is the equivalent of the Latin second declension. The alternation of Greek -os and Latin -us in the nominative singular is familiar to readers of Greek and Latin.

In Attic Greek, an original genitive singular ending *-osyo after losing the s (like in the other dialects) lengthens the stem o to the spurious diphthong -ou (see above under Phonology, Vowels): logos "the word" logou from *logosyo "of the word". The dative plural of Attic-Ionic had -oisi, which appears in early Attic but later simplifies to -ois: anthropois "to or for the men".

Classical Attic may refer either to the varieties of Attic Greek spoken and written in Greek majuscule[13] in the 5th and 4th centuries BC (Classical-era Attic) or to the Hellenistic and Roman [14] era standardized Attic Greek, mainly on the language of Attic orators and written in Greek uncial (good Attic and vehement rival of vulgar or Koine Greek).