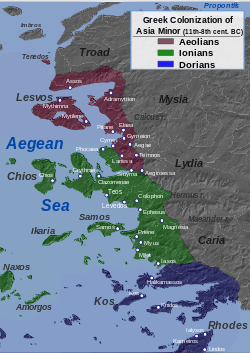 The Doric or Dorian Hexapolis (Δωρικὴ Ἑξάπολις or Δωριέων Ἑξάπολις) was a federation of six cities of Dorian foundation in southwest Asia Minor and adjacent islands, largely coextensive with the region known as Doris or Doris in Asia ἡ Δωρίς η εν Ασία, and included:

The members of this hexapolis celebrated a festival, with games, on the Triopian promontory near Cnidus, in honour of the Triopian Apollo; the prizes in those games were brazen tripods, which the victors had to dedicate in the temple of Apollo; and Halicarnassus was struck out of the league, because one of her citizens carried the tripod to his own house before dedicating it in the temple of Apollo. The hexapolis thus became the Doric Pentapolis. (Herod. i. 144.)

Pliny (v. 28) says, Caria mediae Doridi circumfunditur ad mare utroque latere ambiens, by which he means that Doris is surrounded by Caria on all sides, except where it is bordered by the sea. He makes Doris begin at Cnidus. In the bay of Doris he places Leucopolis, Hamaxitus, etc. An attempt has been made among scholars to ascertain which of two bays Pliny calls Doridis Sinus, the more probable being the Ceramic Gulf. This Doris of Pliny is the country occupied by the Dorians, which Thucydides (ii. 9) indicates, not by the name of the country, but of the people: Dorians, neighbours of the Carians. Ptolemy (v. 2) makes Doris a division of his Asia, and places in it Halicarnassus, Ceramus, and Cnidus. The term Doris, applied to a part of Asia, does not appear to occur in other writers.