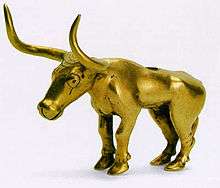 The Maykop culture (also spelled Maikop, Majkop), ca. 3700 BC—3000 BC,[1] was a major Bronze Age archaeological culture in the Western Caucasus region of Southern Russia.

It extends along the area from the Taman Peninsula at the Kerch Strait to near the modern border of Dagestan and southwards to the Kura River. The culture takes its name from a royal burial found in Maykop kurgan in the Kuban River valley.

In the south it borders the approximately contemporaneous Kura-Araxes culture (3500—2200 BC), which extends into eastern Anatolia and apparently influenced it. To the north is the Yamna culture, including the Novotitorovka culture (3300—2700), which it overlaps in territorial extent. It is contemporaneous with the late Uruk period in Mesopotamia.

The Kuban River is navigable for much of its length and provides an easy water-passage via the Sea of Azov to the territory of the Yamna culture, along the Don and Donets River systems. The Maykop culture was thus well-situated to exploit the trading possibilities with the central Ukraine area.

New data revealed the similarity of artifacts from the Maykop culture with those found recently in the course of excavations of the ancient city of Tell Khazneh in northern Syria, the construction of which dates back to 4000 BC.

After the discovery of the Leyla-Tepe culture in the 1980s, some links were noted with the Maykop culture.

The Leyla-Tepe culture is a culture of archaeological interest from the Chalcolithic era. Its population was distributed on the southern slopes of the Central Caucasus (modern Azerbaijan, Agdam District), from 4350 until 4000 B.C. Similar amphora burials in the South Caucasus are found in the Western Georgian Jar-Burial Culture.

The culture has also been linked to the north Ubaid period monuments, in particular, with the settlements in the Eastern Anatolia Region. The settlement is of a typical Western-Asian variety, with the dwellings packed closely together and made of mud bricks with smoke outlets.

It has been suggested that the Leyla-Tepe were the founders of the Maykop culture. An expedition to Syria by the Russian Academy of Sciences revealed the similarity of the Maykop and Leyla-Tepe artifacts with those found recently while excavating the ancient city of Tel Khazneh I, from the 4th millennium BC.

In 2010, nearly 200 Bronze Age sites were reported stretching over 60 miles from the Kuban River to Nalchik, at an altitude of between 4,620 feet and 7,920 feet. They were all "visibly constructed according to the same architectural plan, with an oval courtyard in the center, and connected by roads."[3]

Its inhumation practices were characteristically Indo-European, typically in a pit, sometimes stone-lined, topped with a kurgan (or tumulus). Stone cairns replace kurgans in later interments.

The Maykop kurgan was extremely rich in gold and silver artifacts; unusual for the time.

Attributed to the Maykop culture are petroglyphs which have yet to be deciphered.[4]

The Maykop people lived sedentary lives, and horses formed a very low percentage of their livestock, which mostly consisted of pigs and cattle. Archaeologists have discovered a unique form of bronze cheek-pieces, which consists of a bronze rod with a twisted loop in the middle and a thread through her nodes that connects with bridle, halter strap and headband. Notches and bumps on the edges of the cheek-pieces were, apparently, to fix nose and under-lip belts.[5]

Some of the earliest wagon wheels in the world are found in Maykop culture area. The two solid wooden wheels from the kurgan of Starokorsunskaya in the Kuban region have been dated to the second half of the fourth millennium.[6]

The construction of artificial terrace complexes in the mountains is evidence of their sedentary living, high population density, and high levels of agricultural and technical skills. The terraces were built around the fourth millennium BC. and all subsequent cultures used them for agricultural purposes. The vast majority of pottery found on the terraces are from the Maykop period, the rest from the Scythian and Alan period. The Maykop terraces are among the most ancient in the world, but they are little studied. The longevity of the terraces (more than 5000 years) allows us to consider their builders unsurpassed engineers and craftsmen.

Its burial practices resemble the burial practices described in the Kurgan hypothesis of Marija Gimbutas, and may be regarded as an Indo-European intrusion from the Pontic steppe into the Caucasus. However, according to J.P. Mallory,

... where the evidence for barrows is found, it is precisely in regions which later demonstrate the presence of non-Indo-European populations.[7]

The culture has been described as, at the very least, a "kurganized" local culture with strong ethnic and linguistic links to the descendants of the Proto-Indo-Europeans. It has been linked to the Lower Mikhaylovka group and Kemi Oba culture, and more distantly, to the Globular Amphora and Corded Ware cultures, if only in an economic sense. Yet, according to Mallory,

Such a theory, it must be emphasized, is highly speculative and controversial although there is a recognition that this culture may be a product of at least two traditions: the local steppe tradition embraced in the Novosvobodna culture and foreign elements from south of the Caucasus which can be charted through imports in both regions.[8]

According to Mariya Ivanova the Maikop origins were on the Iranian Plateau:

Graves and settlements of the 5th millennium BC in North Caucasus attest to a material culture that was related to contemporaneous archaeological complexes in the northern and western Black Sea region. Yet it was replaced, suddenly as it seems, around the middle of the 4th millennium BC by a “high culture” whose origin is still quite unclear. This archaeological culture named after the great Maikop kurgan showed innovations in all areas which have no local archetypes and which cannot be assigned to the tradition of the Balkan-Anatolian Copper Age. The favoured theory of Russian researchers is a migration from the south originating in the Syro-Anatolian area, which is often mentioned in connection with the socalled “Uruk expansion”. However, serious doubts have arisen about a connection between Maikop and the Syro-Anatolian region. The foreign objects in the North Caucasus reveal no connection to the upper reaches of the Euphrates and Tigris or to the floodplains of Mesopotamia, but rather seem to have ties to the Iranian plateau and to South Central Asia. Recent excavations in the Southwest Caspian Sea region are enabling a new perspective about the interactions between the “Orient” and Continental Europe. On the one hand, it is becoming gradually apparent that a gigantic area of interaction evolved already in the early 4th millennium BC which extended far beyond Mesopotamia; on the other hand, these findings relativise the traditional importance given to Mesopotamia, because innovations originating in Iran and Central Asia obviously spread throughout the Syro-Anatolian region independently thereof.[9]

More recently, some very ancient kurgans have been discovered at Soyuqbulaq in Azerbaijan. These kurgans date to the beginning of the 4th millennium BC, and belong to Leylatepe Culture. According to the excavators of these kurgans, there are some significant parallels between Soyugbulaq kurgans and the Maikop kurgans:

"Discovery of Soyugbulaq in 2004 and subsequent excavations provided substantial proof that the practice of kurgan burial was well established in the South Caucasus during the late Eneolithic [...] The Leylatepe Culture tribes migrated to the north in the mid-fourth millennium, B.C. and played an important part in the rise of the Maikop Culture of the North Caucasus."[10]