Corbin is a home rule-class city[1] in Whitley and Knox counties in the southeastern portion of the U.S. state of Kentucky. The urbanized area around Corbin extends into Laurel County; this area is not incorporated into the city limits due to a state law prohibiting cities from being in more than two counties. However, this area is served by some of the city's public services. As of the 2010 census, the city population was 7,304, with 21,132 living in the "urban cluster" that includes Corbin and North Corbin.

The Harland Sanders Café and Museum

The first settlement in the Corbin area was known as Lynn Camp Station and the first post office was called Cummins for community founder Nelson Cummins. It was discovered in 1885 that both Cummins and Lynn Camp were already in use as names for Kentucky post offices and postmaster James Eaton was asked to select another name. He chose Corbin, for Rev. James Corbin Floyd, a local minister.[2] The town was incorporated under that name in 1905.

Corbin has a somewhat troubled racial past, including a race riot in 1919 in which a white mob forced nearly all the town's 200 black residents onto a freight train out of town, and a sundown town policy until the late 20th century.[3]

Corbin lies in the Cumberland Plateau region of Appalachia in southeastern Kentucky. The Pine Mountain Overthrust Fault, a geologic fault system located several miles to the east, produces occasional tremors, the most recent in 2008.

Corbin exhibits a humid subtropical climate, typical of southeastern Kentucky. The region experiences four distinct seasons, Winters are cool to cold, with mild periods. Summers are generally hot and humid, with variable spring and fall seasons. Precipitation is common year round, but more prevalent in the summer months. The climate of Corbin is somewhat moderated by the surrounding mountains.

Location of the London MSA

The entire city of Corbin is located in the London, Kentucky micropolitan area, whose current boundaries were established in 2013 by the U.S. Office of Management and Budget in coordination with the United States Census Bureau.[7] Previously, the London micropolitan area had consisted solely of Laurel County, while the Whitley County portion of Corbin was the principal city of its own micropolitan area that consisted solely of that county. Both entities were in turn the components of a statistical entity officially known as the "Corbin–London, KY Combined Statistical Area".[8][9] The CSA had a combined population of 94,486 at the 2010 census.[10] The Knox County portion of Corbin was outside the former Corbin–London statistical area, but is now included in the redefined London micropolitan area.

There were 3,093 households out of which 29.8% had children under the age of 18 living with them, 41.3% were married couples living together, 16.0% had a female householder with no husband present, 4.2% had a male householder with no wife present, and 38.5% were non-families. 34.8% of all households were made up of individuals and 16.3% had someone living alone who was 65 years of age or older. The average household size was 2.27 and the average family size was 2.91.

Originally provided by L&N Railroad, rail transport was the backbone of the local economy in the first half of the twentieth century. While the railroad (presently CSX) continues to play an important role, the decline of the rail industry in the latter half of the twentieth century, as well as the loss of some manufacturing jobs due to globalization, has prompted the community to begin diversifying its economy.

Each year in early August, Corbin hosts a festival called NIBROC (Corbin spelled backwards) featuring open-air concerts, carnival attractions, a beauty pageant, parade, and other events. The festival is featured, if anachronistically, in the play Last Train to Nibroc by Arlene Hutton.[11] (Though the play is set in the 1940s, the festival itself only dates to 1952.) NIBROC oftens features free performances by popular musical acts such as Kansas, Joan Jett and The Blackhearts, 38 Special, Foghat, Starship, Percy Sledge, The Turtles, and The Marshall Tucker Band. In episode 10 of the American reality-documentary television series On the Road with Austin & Santino on Lifetime entitled "We Love a Parade," the fashion designers visit Corbin to custom design a dress for a local woman participating in the NIBROC parade.

Despite being in dry counties (Knox and Whitley), the city of Corbin allows full retail alcohol sales, following a successful local option election on February 14, 2012. The city had previously voted in 2004 to allow sales of alcohol by the drink in larger restaurants.[12]

Corbin has an association with Kentucky Fried Chicken, having been the location of the chain's first restaurant, opened in 1930. Corbin appears in the animated cartoon South Park's episode "Medicinal Fried Chicken", wherein Eric Cartman visits the town to meet with Harland Sanders. Corbin is depicted as located in a lush rain forest in parody of the 1983 film Scarface, wherein Tony Montana and Omar Suarez visit Bolivia to meet with a drug kingpin.[13]

Corbin is also mentioned in the season 4 premiere of Justified, in which the town's name can been seen on the newspaper being delivered in the opening scene.

Corbin is governed by a mayor and city commission; since it does not have a mayor/alderman form of government, it is considered home rule-class under Kentucky's current city classification system that took effect in 2015. Willard McBurney is the current mayor. Suzie Razmus, Joe Shelton, Ed Tye, and Bruce Hodge are its four current Commissioners.[14]

Corbin is one of the few cities in Kentucky that lie in two counties—Whitley and Knox. Many built-up areas in neighboring Laurel County have a Corbin postal address, but lie outside of the city limits. This arrangement has created some problems with taxes, and also the census records. The city receives a portion of the occupational tax collected in Whitley County, but Knox County has refused to give Corbin a part of the tax collected there. On March 10, 2008, the City Commission voted to file a lawsuit against Knox County to receive a portion of the tax collected within city limits.[15] On May 23, 2014, the Kentucky Court of Appeals ruled that the "Stivers amendment", passed as part of KY HB 499 "Tax Amnesty" legislation in 2012, did not violate the state's constitution. The measure essentially cancelled the effect of court rulings that would have enabled the city of Corbin to keep all the revenue from the tax generated inside the city limits. Corbin's mayor, Willard McBurney, vowed to carry the fight to the state Supreme Court.[16]

Corbin, like many communities of its size in southeastern Kentucky, has an independent school system (in Kentucky, a public school system not affiliated with a county; most such districts are associated with individual cities). The district was officially established in 1916 and the 100th class will graduate in 2017. The Corbin Independent School District includes:

The community also places considerable emphasis on the success of its high school athletic teams. "Redhounds" games, especially football, are important social events for many within the community.

In 2004, Eastern Kentucky University opened an extension campus in Corbin.

The annual Battle for the Brass Lantern, a college football rivalry game between the University of the Cumberlands and Union College, was played at Corbin High School's stadium in 2006 and 2007, as a neutral field roughly equidistant from the two campuses. The rivalry dates to 1905.[17]

Corbin was formerly home to Saint Camillus Academy, a private pre-K-8 school affiliated with the Catholic Diocese of Lexington, Kentucky. Established in 1908 by the Sisters of Divine Providence, the school has been successful as both a boarding school for national and international students and as a Montessori school. Its original schoolhouse, built in 1913, was demolished in summer 2008. The new school building is still situated atop a prominent hill overlooking the town, providing a striking backdrop to the streets of downtown Corbin. The school closed in 2012 after 99 years of service. The property and grounds of the school were sold to the Corbin School System to house a new Corbin Middle School due to rapidly increasing student population and age of the current building.

Corbin straddles Interstate 75 and U.S. Highway 25 (which splits into US 25E and US 25W in North Corbin). The town is served by the CSX rail line. 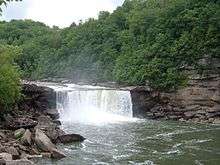