Whitley County is a county situated in the U.S. state of Kentucky. As of the 2010 census, the population was 35,637.[1] The county seat is at Williamsburg,[2] though the largest city is Corbin, and the county's District Court (a trial court of limited jurisdiction) sits in both cities.

Whitley County was created on January 17, 1818 from adjacent Knox County, Kentucky.[3] In the years prior to its establishment as an independent county, many skirmishes were fought between native Indians and hunters and trappers in the area. The namesake of the county, Colonel William Whitley,[4] is famous locally for fighting many of these battles within the area, safeguarding the Wilderness Road, as well as for his service in the War of 1812, where he was killed at the Battle of the Thames. The county seat, Williamsburg, is also named for Colonel Whitley, with the first court held at the home of the town's earliest resident, Samuel Cox.[5]

Its rugged terrain, densely forested woodlands, and a history of conflict with local Indian tribes all combined to make for a very slow rate of growth in Whitley County. The development of the coal mining industry in the area towards the late 1800s spurred on population growth as poor families from neighboring states rushed into the county and led to the formation of Corbin, still the largest city in Whitley County.

North Corbin, just north of Whitley County is home to Sanders Cafe, which is the birthplace of Kentucky Fried Chicken. It was founded there by Harland David Sanders, better known as Colonel Sanders, in 1930.

The current elected officials of Whitley County are:[6]

From 2009 to 2011, young journalist Adam Sulfridge and his editor Samantha Swindler of the Times-Tribune (Corbin, KY) worked to expose corruption in the Whitley County Sheriff's Department. Then Sheriff Lawrence "Larry" Hodge was first elected in 2002. Sheriff Hodge built his reputation as a tough crime fighter, but most residents did not know the Sheriff accepted money in exchange for allowing defendants to walk free. Sheriff Hodge also stole seized firearms and drug evidence, according to the Times-Tribune and affidavits filed by the Bureau of Alcohol, Tobacco, Firearms and Explosives.[8]

A Whitley County special grand jury returned a 21-count indictment against Sheriff Hodge while he was still Sheriff (November 8, 2010). He remained Sheriff until the end of 2010. In the late spring of 2011, Hodge appeared in United States District Court for the Eastern District of Kentucky in London and pleaded to an 'information.' That summer, Hodge was sentenced to 15.5 years in federal prison for drug trafficking, money laundering and extorting persons arrested by his department (with Williamsburg attorney Ronnie "Ron" W. Reynolds, who was sentenced to three years in federal prison for his part in the crimes).

Kentucky state auditors determined at least $200,000 had been stolen or was otherwise missing from Sheriff Hodge's official accounts. 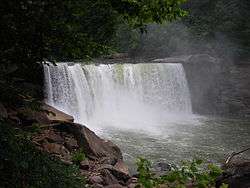 Whitley County is located within the Cumberland Plateau of southeastern Kentucky, which is greatly overlapped by the broad Eastern Coal Field region of the state. Because of its location in the midst of Cumberland Mountains, elevations in the county range from 723 feet (220 m) to 2,220 feet (680 m) above sea level.[10] 38,000 acres (150 km2) of western Whitley County are preserved within the Daniel Boone National Forest. Cumberland Falls, located in Cumberland Falls State Resort Park, is the site of the largest waterfall in the Commonwealth of Kentucky. Both Daniel Boone Forest and Cumberland Falls State Park are operated by the Kentucky State Parks system, also located in the county. Two regionally significant waterways meander through the county, namely the Laurel and Cumberland river.

Whitley County's economy has always relied heavily on its natural resources, particularly coal and timber, as the area's heavily forested, mountainous terrain contains abundant sources of such material. Other resources worked in the area include iron, oil, and very small amounts of silver. Due to the rough territory created by the Cumberland Mountains, agriculture in the county has historically been quite stunted, although tobacco and corn are grown in some areas.

The University of the Cumberlands (formerly known as Cumberland College), located in Williamsburg, is the largest private university in Kentucky, and the only university with its main campus in Whitley County. The school's sports teams play on the NAIA level and provide college level sporting events for the local community. In addition, Eastern Kentucky University maintains a branch campus in the Whitley County portion of Corbin.

Whitley County, which had historically been dry, is now officially classified by the state as a moist county. This means that the sale of alcohol in the county is prohibited except in certain areas as voted on by the residents of the area, including at least one area of the county allowing full retail alcohol sales. In Whitley County, the areas that permit alcohol sales are: