The Grantha script (Tamil Kiranta eḻuttu, Malayalam Grantha lipi) was widely used between the sixth century and the 20th centuries by Tamil speakers in South India, particularly in Tamil Nadu and Kerala, to write Sanskrit and the classical language Manipravalam, and is still in restricted use in traditional Vedic schools (Sanskrit veda pāṭhaśālā).[1] It is a Brahmic script, having evolved from the Brahmi script in Tamil Nadu. The Malayalam script is a direct descendant of Grantha as are the Tigalari and Sinhala alphabets.

The rising popularity of Devanagari for Sanskrit and the political pressure created by the Tanittamil Iyakkam[2] for its complete replacement by the modern Tamil script led to its gradual disuse and abandonment in Tamil Nadu in the early 20th century, except for specialised Hindu religious literature. Grantha script still lives in Tamil Nadu, albeit in reduced state.

In Sanskrit, grantha is literally 'a knot'.[3] It is a word that was used for books, and the script used to write them. This stems from the practice of binding inscribed palm leaves using a length of thread held by knots. Although Sanskrit is now mostly written with Devanagari, Grantha was widely used to write Sanskrit in the Tamil-speaking parts of South Asia until the 19th century. Scholars believe that the Grantha script was used when the Vedas were first put into writing around the 5th century CE. In the early 20th century, it began to be replaced by Devanagari in religious and scholarly texts and the Tamil script (with the use of diacritics) in popular texts.

In modern times, the Grantha script is used in certain religious contexts by orthodox Tamil-speaking Hindus. Most notably, they use the script to write a child's name for the first time during the nāmakaraṇa naming ceremony, and to write the Sanskrit portion of traditional wedding cards and announcements of a person's last rites. It is also used in many religious almanacs to print traditional formulaic summaries of the coming year.

Grantha script may be classified as follows:[4]

An archaic and ornamental variety of Grantha is sometimes referred to as Pallava Grantha. They were used by the Pallava in some inscriptions. Mamallapuram Inscriptions, Tiruchirapalli Rock Cut Cave Inscriptions, Kailasantha Inscription come under this type.

The Pallavas also produced a distinctive script separate from the Grantha family.

This type of Grantha was used by Cholas approximately from 650 CE to 950 CE. Inscription of later Pallavas and Pandiyan Nedunchezhiyan are also examples for this variety of Grantha Script.

Inscriptions of the Imperial Thanjavur Cholas are an example for Medieval Grantha. This variety was in vogue from 950 CE to 1250 CE.

Grantha in the present form descended from later Pandyas and the Vijayanagara rulers. The Modern form of Grantha is very similar to Malayalam alphabet and the Modern Tamil Script.

The font used in the following tables is e-Grantamil taken from INDOLIPI.

The glyphs below denote the late form of Grantha Script, which can be noticed by its similarity with the Modern Tamil Script. 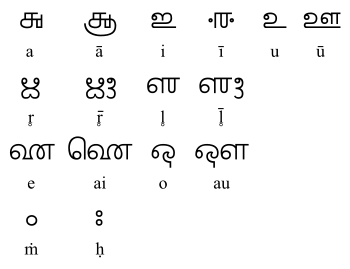 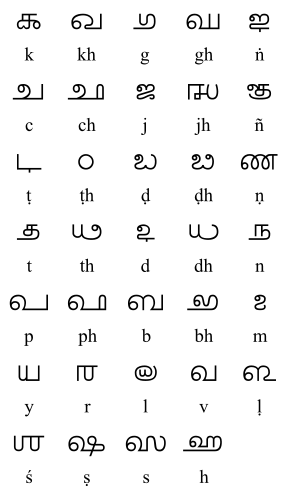 As with other Abugida scripts Grantha consonant signs have the inherent vowel /a/. Its absence is marked with Virāma:

For other vowels diacritics are used:

Sometimes ligatures of consonants with vowel diacritics may be found, e.g.:

There are also a few special consonant forms with Virāma:

Grantha has two ways of representing consonant clusters. Sometimes, consonants in a cluster may form ligatures.

Ligatures are normally preferred whenever they exist. If no ligatures exist, "stacked" forms of consonants are written, just as in Kannada and Telugu, with the lowest member of the stack being the only "live" consonant and the other members all being vowel-less. Note that ligatures may be used as members of stacks also.

⟨ya⟩ when final in a cluster, and

respectively. These are often called "ya-phalaa" and "ra-vattu" in other Indic scripts.

⟨ra⟩ as initial component of a cluster becomes

(called Reph as in other Indic scripts) and is shifted to the end of the cluster but placed before any "ya-phalaa".

The Grantha text of each sample is followed by a transliteration into Latin (ISO 15919) and Devanāgarī scripts.

By comparing the old print from 1886 with the modern version given below one may see the difficulties the typesetter had with Grantha.

Comparison with other scripts

Note: As in Devanāgarī ⟨e⟩ and ⟨o⟩ in Grantha stand for [eː] and [oː]. Originally also Malayāḷam and Tamiḻ scripts did not distinguish long and short ⟨e⟩ and ⟨o⟩, though both languages have the phonemes /e/ /eː/ and /o/ /oː/. The addition of extra signs for /eː/ and /oː/ is attributed to the Italian missionary Constanzo Beschi (1680–1774).

Another table that compares the consonants ka , kha, ga , gha, ṅa with other Southern Indic scripts such as Grantha, Tigalari, Malayalam, Kannada and Sinhala. 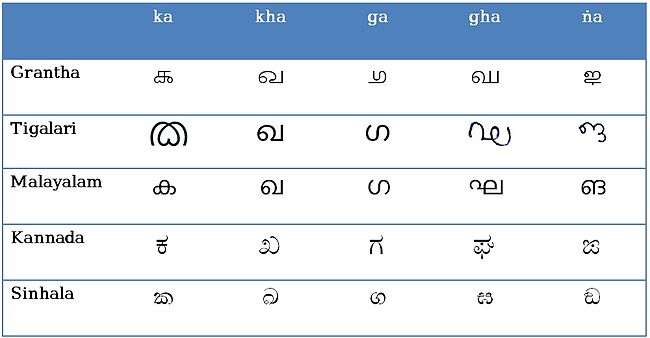 Grantha script was added to the Unicode Standard in June 2014 with the release of version 7.0.