The Tangut script (Chinese: 西夏文 xī xià wén) was a logographic writing system, used for writing the extinct Tangut language of the Western Xia Dynasty. According to the latest count, 5863 Tangut characters are known, excluding variants.[1] The Tangut characters are similar in appearance to Chinese characters,[2] with the same type of strokes, but the methods of forming characters in the Tangut writing system are significantly different from those of forming Chinese characters. As in Chinese calligraphy, regular, running, cursive and seal scripts were used in Tangut writing.

According to the History of Song (1346), the script was designed by the high-ranking official Yeli Renrong under Western Xia Emperor Li Yuanhao's supervision in 1036.[3][4] The script was invented in a short period of time, and was put into use quickly. Government schools were founded to teach the script. Official documents were written in the script (with diplomatic ones written bilingually). A great number of Buddhist scriptures were translated from Tibetan and Chinese, and block printed in the script.[5] Although the dynasty collapsed in 1227, the script continued to be used for another few centuries. The last example of the script occurs on a pair of Tangut dharani pillars found at Baoding (130 km southwest of Beijing), which were erected in 1502.[6]

6,125 characters of the Tangut script were included in Unicode version 9.0 in June 2016 in the Tangut block. 755 Radicals and components used in the modern study of Tangut were added to the Tangut Components block, and the Tangut iteration mark was included in the Ideographic Symbols and Punctuation block.[7] 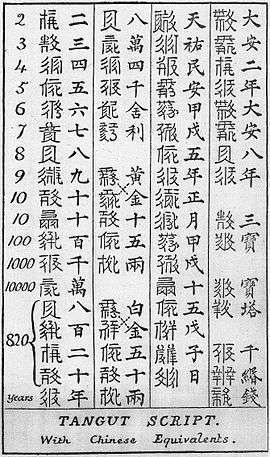 The Tangut character for "man", a relatively simple character

The [Tangut] language is remarkable for being written in one of the most inconvenient of all scripts, a collection of nearly 5,800 characters of the same kind as Chinese characters but rather more complicated; very few are made up of as few as four strokes and most are made up of a good many more, in some cases nearly twenty. It is extremely difficult to remember them, since there are few recognizable indications of sound and meaning in the constituent parts of a character, and in some cases characters which differ from one another only in minor details of shape or by one or two strokes have completely different sounds and meanings.[8]
— Gerard Clauson

The Tangut characters for "toe" (left) and "finger" (right), both characters having the same components