In this Japanese name, the family name is Ikeda.

Ikeda was born in present-day Takehara, Hiroshima, on 3 December 1899.[1] He attended Kyoto Imperial University and joined the Ministry of Finance following graduation in 1925. While at the Ministry, he served as the head of the local tax offices in Hakodate and Utsunomiya. During his time in the latter role, in 1929, he contracted pemphigus foliaceus and went on sick leave for two years, formally resigning in 1931 once his sick leave had run out. The condition was cured by 1934. He briefly considered accepting a position at Hitachi, but returned to the Ministry of Finance in December 1934 to head a tax office in Osaka. Ikeda remained within the ministry through the end of World War II, eventually becoming Vice Minister of Finance under Prime Minister Shigeru Yoshida in 1947.

Ikeda resigned from the Ministry of Finance in 1948 and won a seat in the House of Representatives, representing a portion of Hiroshima Prefecture, in the general election of 23 January 1949. He was a part of the liberal group that established the Democratic Liberal Party, a forerunner of the current Liberal Democratic Party.[2] Along with Eisaku Satō, Ikeda was an understudy of Shigeru Yoshida early in his career, and was called an "honor student" for his commitment to the ideas presented in the Yoshida Doctrine, although he was a strong personality himself.[3]

He was appointed Minister of Finance on 16 February 1949, and on 7 March announced the Dodge Line monetary policy with American occupation advisor Joseph Dodge. He visited the United States in 1950 to begin preparations for US-Japan security cooperation following the end of the occupation. In 1951, he oversaw the formation of the Development Bank of Japan and Japan Bank for International Cooperation.

Ikeda became Minister of International Trade and Industry following a cabinet reshuffle in 1952, but resigned less than a month later following a blunt remark in the Diet that "it makes no difference to me if five or ten small businessmen are forced to commit suicide", after Ikeda's policies favoring heavy industry were imposed. He remained a senior LDP lawmaker in various party posts, and returned to the Cabinet as Minister of Finance in December 1956. He then became minister without portfolio in June 1958, and Minister of International Trade and Industry in June 1959. 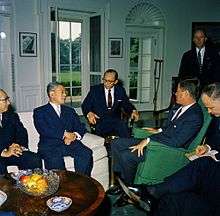 Ikeda was elected president of the LDP and became prime minister in 1960 shortly after the crisis of security treaty with US.[3] In domestic policy, statutory minimum wages were introduced in 1959,[4] while major initiatives were made in social security. A universal national pension scheme was established in 1961,[5] together with a system of universal health insurance.[6] The Physically Disabled Persons Employment Promotion Law was passed in 1960 to promote the employment of people with physical disabilities through the creation of an employment quota system in Japan, an on-the-job adjustment scheme, and a financial assistance system in addition to offering vocational guidance and placement services through approximately 600 Public Employment Security Offices (PESO) and their branch offices.[7] In addition, the 1963 Welfare Law for the Aged provided funding for respite care, home care, homes for the aged, and other services paid by taxes collected through local and central governments.[8]

As prime minister, Ikeda advocated the "income-doubling plan" and "politics of patience and reconciliation", respectively emphasizing economic development of Japan while minimizing societal conflict. He was noted for resolution of several major labor disputes, including a long-running strike at Miike Mine of Mitsui Mining Company (the resolution of this strike was in fact the first act of the Ikeda cabinet). Takafusa Nakamura, an economic historian, described Ikeda as "the single most important figure in Japan's rapid growth. He should long be remembered as the man who pulled together a national consensus for economic growth." His plan predicted a 7.2 percent growth rate (thereby doubling GNP over ten years), but by the second half of the 1960s, average growth had climbed to an astounding 11.6%. In addition, while Ikeda's "income-doubling plan" called for average personal incomes to double with ten years, this was actually achieved within seven years.[9] In 1960, then French president Charles De Gaulle famously referred to Ikeda as "that transistor salesman", around the time of Hayato Ikeda's premiership, Ikeda started investment in technological fields in order to broaden Japanese Exports from its hallmark of basic consumer goods such as toys, white goods appliances and bicycles towards more technologically based exports in order to extend Japan's long-term growth whilst the era of double digit growth from Japan's post-war miracle from the 50's had began to subside. Setting in the stage for Japan to become competitive in international markets and competing with other western countries in the fields of Electronics and Automobiles.

Ikeda contracted laryngeal cancer and was admitted to the National Cancer Center for treatment in September 1964, by which point the condition had progressed considerably. On 25 October, the day after the closing of the 1964 Summer Olympics in Tokyo, Ikeda announced his resignation. He designated Eisaku Sato to serve as his successor.

Although Ikeda was released from the hospital in December 1964, he underwent another operation at the University of Tokyo Hospital in August 1965. He died of pneumonia on 13 August, several days after the operation, at the age of 65.

Ikeda headed one of the significant factions which occupied the left wing of the party.[10] As faction leader he was succeeded by Shigesaburo Maeo, Masayoshi Ōhira, Kiichi Miyazawa, Koichi Kato, and Mitsuo Horiuchi.[10]