In this Japanese name, the family name is Yonai.

Yonai was born in Morioka city in Iwate Prefecture as the first son of an ex-samurai retainer of the Nanbu clan of the Morioka Domain. He graduated from the 29th class Imperial Japanese Naval Academy in 1901, ranked 68 of 125 cadets (Japan Center for Asian Historical Records, n.d.).[1] After midshipman service on the corvette Kongō, and cruiser Tokiwa he was commissioned as ensign in January 1903. He served in administrative positions until near the end of the Russo-Japanese War of 1904-1905, when he went to sea again on the destroyer Inazuma and the cruiser Iwate.

After the war, he served as chief gunnery officer on the cruiser Niitaka, battleship Shikishima, and cruiser Tone.[2] After his promotion to lieutenant commander in December 1912, he graduated from the Naval War College and was assigned as naval attaché to Russia during the height of World War I, from 1915 to 1917. While overseas, he was promoted to commander; after the collapse of the Russian Empire, he was recalled to Japan and later became executive officer on the battleship Asahi.[2] He rose to the rank of captain in December 1920 and was subsequently sent as naval attaché to Poland from 1921 to 1922. 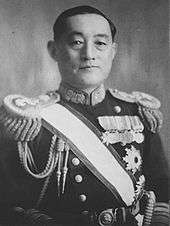 On his return to Japan, he was captain of the cruisers Kasuga (1922–1923) and Iwate (1923–1924), and battleships Fusō (in 1924) and Mutsu (1924–1925). Yonai was promoted to rear admiral on December 1, 1925.[2] He became Chief of the 3rd Section of the Imperial Japanese Navy General Staff in December 1926. Within the Navy General Staff, he served on the Technical Council of the Navy Technical Department.[2] He was appointed Commander-in-Chief of the First Expeditionary Fleet, sent to the Yangtze River in China in December 1928. Following the success of this mission, he was promoted to vice-admiral in December 1930 and placed in command of the Chinkai Guard District, in Korea. 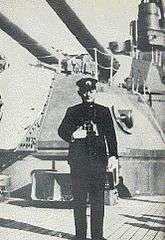 Commander in Chief of the Combined Fleet, 1936

Yonai was given command of the IJN 3rd Fleet in December 1932, following which he again commanded the Sasebo Naval District (November 1933), IJN 2nd Fleet (November 1934) and Yokosuka Naval District (December 1935) before receiving appointment as Commander-in-Chief of the Combined Fleet and concurrently the IJN 1st Fleet in December 1936.[2] While in command at Sasebo, the Japanese Navy was shaken by the Tomozuru Incident, when it was determined that the basic design of the Chidori-class torpedo boats was flawed, thus calling into question the basic designs of many of the warships in the Japanese navy.

While in command at Yokosuka, the February 26 Incident erupted in Tokyo. Yonai was visiting his mistress in Shinbashi the night the attempted coup d'état began, only a couple of blocks away, but knew nothing of the situation until he returned to base the following morning.

Yonai became full admiral in April 1937 and Navy Minister in the cabinet of Prime Minister Senjūrō Hayashi in 1937. He served in the same position under the subsequent first Fumimaro Konoe and Kiichirō Hiranuma administrations, through August 1939.[2] After Nobuyuki Abe became Prime Minister, Yonai remained on the Supreme War Council. While Navy Minister, Yonai was known as a man of few words. His speeches tended to be short, and were delivered in his almost indecipherable Nambu accent. Written records of his speeches are only about half the length of his contemporaries.

As Navy Minister, Yonai was alarmed by the growing tension between Japan and Great Britain and the United States, at a time when the bulk of the Imperial Japanese Army was tied down in an apparently unending quagmire in China. His efforts to promote peace made him unpopular with ultranationalist extremists, and (as with Admiral Isoroku Yamamoto) he was the target of several assassination attempts. However, Yonai supported the construction of the Yamato-class battleships in an effort to maintain a military balance with the world's other two naval superpowers. 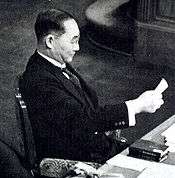 Yonai reading a memo during the House plenary session in February 1940.

Yonai was appointed Prime Minister of Japan from January 6, 1940, largely with the backing of Emperor Hirohito. As Prime Minister, he continued the strong pro-British, pro-American stance he held as Navy Minister and continued his strong opposition to the Tripartite Pact with Nazi Germany and fascist Italy.

Following the German occupation of the Low Countries and France in May–June 1940, the Imperial Japanese Army began to show dissatisfaction with Yonai's anti German policy. The disagreement became apparent in early July 1940, as Minister of War Shunroku Hata began to criticize the Prime Minister openly.[3] When Hata resigned, Yonai was subsequently forced to resign on July 21, 1940. The Japanese Constitution required the Minister of War to be a general from the Army, and no other general would accept the position, due to the pro-Axis stance of the Imperial Japanese Army.[4] The Tripartite Pact was signed on September 27, 1940.

Yonai served as Deputy Prime Minister and concurrently as Navy Minister again under the cabinet of Prime Minister Kuniaki Koiso from July 22, 1944, during which time he returned to the active duty roster from the reserve list. By this time, Saipan had fallen to the Allies.

Yonai remained Navy Minister under the administration of Prime Minister Kantarō Suzuki. In the last few weeks before Japan's surrender, he sided with Prime Minister Suzuki and Foreign Minister Shigenori Tōgō in support of acceptance of the Potsdam Declaration in opposition to Minister of War Korechika Anami, Chief of Naval General Staff Admiral Soemu Toyoda and Chief of the Army General Staff General Yoshijirō Umezu.

Yonai remained Navy Minister in the cabinets of Prime Minister HIH Higashikuni Naruhiko and Prime Minister Kijūrō Shidehara from August 1945, during which time he presided over the final dissolution of the Imperial Japanese Navy.

He played a major role during the International Military Tribunal for the Far East in working with the major defendants, such as Hideki Tōjō, to coordinate their testimonies so that Emperor Hirohito would be spared from indictment. According to his interpreter Suichi Mizota, in March 1946 Bonner Fellers asked him to make Tōjō bear all responsibility for the Greater East Asia War [5] After the war, Yonai devoted rest of his life to help to rebuild devastated Japan.

Yonai suffered from high blood pressure most of his life, but he died of pneumonia in 1948 at the age of 68. His grave is located at the temple of Enko-ji in his hometown of Morioka.

Yonai was a man of few words, but people listened when he spoke. Because of his work as a military attaché in Russia and Poland and his travels around European countries, he had a broader perspective of world affairs than many other senior Japanese military officials. In the late 1930s Yonai already analyzed the naval capabilities of the Imperial Japanese Navy and allied countries, versus those of Germany and Italy and he concluded that Japan should not ally itself with Germany and Italy. In addition to his experience as an attaché, he had participated in the Battle of the Japanese Sea (known in the West as the Battle of Tsushima), during the Russo-Japanese war as a Lieutenant, so he understood the realities of naval warfare. Hence, on August 8, 1939, at the five-ministry commission that was intended to make a plan for war, the minister of finance, Ishiwata, asked Yonai, "Is it possible for the Imperial Japanese Navy to triumph over America and Britain?" (Agawa, n.d.). Yonai answered, "No. The Imperial Japanese Navy is not designed to open fire against them. The Third Reich and the Italian Navy are out of question." (Agawa, n.d.).

Since the historical triumph of the Battle of the Japanese Sea in 1905, as a part of the Russo-Japanese War, the Imperial Japanese Navy had been the world’s third strongest. By the end of World War I Japan had a powerful battle fleet. In the 1930s, following the Washington Naval Treaty, Japan built a strong naval aviation arm with excellent aircraft and pilots. Even so, the Imperial Japanese Navy could not compete against the Royal Navy and the United States Navy, the top two navies in the world. Consequently, the much smaller Kriegsmarine (German Navy) and the Regia Marina (Italian Navy) could not defeat these two dominants. Furthermore, the Imperial Japanese Navy had been made overconfident by its victory in the Naval Battle of the Japanese Sea and was not willing to acknowledge its inferiority. However, his unique experiences made him convinced of his view. Therefore, Yonai clearly announced his opinion: the Imperial Japanese Navy will lose if it attacked the Royal Navy and the United States Navy.[6][7]

Despite not being famous, Yonai made significant decisions that depict his strong moral character. At his appointment as Prime Minister, he retired from active service of the Imperial Japanese Navy without being asked to. He intended not to control his cabinet ministers by naval influences. This verdict was momentous. Because once military personnel retires, he loses effects on the military, hence all the generals and admirals rebuffed to retire. Indeed, Tojo Hideki, the 40th Prime Minister did not retire at his promotion to Prime Minister. He persisted with active service in the Imperial Japanese Army to uphold his effects over it, and the cabinet participants. Because of Yonai’s retirement from the Imperial Japanese Navy, the Yonai Cabinet was cooperative. One prominent evidence of this was that: nevertheless his cabinet had continued just a half a year, his cabinet members and followers formed a friendly reunion right after his resignation in 1937, and it still lasting in the Heisei period (1989–present). This reunion is named Ichi-Roku Kai, which means sixteenth gathering, because Yonai's appointment and resignation as a Prime Minister both happened on the 16th day of their months.[6]