JAL Express Co., Ltd. (JEX) (株式会社ジャル エクスプレス, Kabushiki-gaisha Jaru Ekusupuresu), was an airline with its headquarters at Tokyo International Airport and in Ota-ku, Tokyo, Japan, and its main hub at Tokyo International Airport. The airline also maintained offices in the Japan Airlines Building in Shinagawa, Tokyo. Its operations included scheduled and non-scheduled passenger services to eight regional destinations across Japan. In addition, the airline operated additional 15 destinations in Japan and two destinations in the People's Republic of China on behalf of Japan Airlines, under a wet-lease agreement.

JAL Express was a wholly owned subsidiary of Japan's flag carrier, Japan Airlines and an affiliate member of the Oneworld alliance. The airline was founded on April 1, 1997, and began operations with a Boeing 737-400 on July 1, 1998. It celebrated its tenth anniversary of establishment and first flight in April 2007 and July 2008, respectively. The airline operated its first international flight in May 2009 and now flies to Hangzhou and Shanghai. In the fiscal year ended March 31, 1999, JAL Express, together with its sister airlines within the JAL Group, carried over 32 million passengers and over 1.1 million tons of cargo and mail.

The carrier ended operations on 30 September 2014 after being fully integrated with Japan Airlines.

JAL Express (JEX) was established on April 1, 1997, as a wholly owned domestic subsidiary airline of Japan Airlines (JAL), with an initial capital of ¥5.8 million. The airline operates scheduled passenger services to regional domestic destinations in Japan, as well as some low-demand flights for JAL under wet-lease agreement. It was anticipated that the airline may enter services on the domestic trunk and short-haul international routes. On July 1, 1998, JAL Express commenced operations from Osaka to Miyazaki and Kagoshima with two Boeing 737-400s, non-Japanese cockpit crew, and short-term contracted cabin attendants.[1][2][3] The airline's cabin attendants are called Sky Cast, their duties include cleaning the 150-seat cabin between flights.[4]

The airline celebrated its one millionth passenger in June 2000 and commenced wet-lease operation for its parent JAL in December 2000. On 14 November 2002, JAL introduced a new aircraft livery design - "The Arc of the Sun" - across all JAL Group fleet. A reception to celebrate the completion of the first painted aircraft with the JAL Group new design was held at the JAS M2 hangar. In April 2005, McDonnell Douglas MD-81 was introduced to the airline fleet, the aircraft has an all Economy Class configuration with 163 seats. JAL Express became an affiliate member of Oneworld on April 1, 2007, together with four of its sister airlines, in the alliance's biggest expansion in its young history.[5] On the same day, the airline celebrated its tenth anniversary of establishment.[2][6]

JAL Express welcomed the arrival of the new Boeing 737-800 to its fleet in January 2008 and celebrated the tenth anniversary of its first flight in July 2008. The airline operated its first international flight in May 2009 under a wet-lease agreement with JAL. It now flies to Hangzhou and Shanghai from Osaka (Kansai); and Hangzhou from Tokyo (Narita).[2]

Since March 27, 2011, all of JAL Express flights were operated as JAL flights, with full merger of the two carriers by September 2014.

JAL Express operated to the following destinations (as of September 2014):[9] 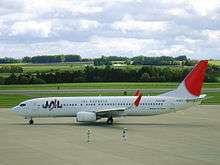 In addition to the normal scheduled passenger services, JAL Express also operated to the following destinations on behalf of Japan Airlines, under a wet-lease agreement.[9]

As of September 2013, JAL Express operates 42 narrow-body aircraft, with either two classes of service (class J and Economy class) or single class of service (Economy Class). The average fleet age is 3.8 years[10][11]

The JMB programme has no membership fee, and mileage will be valid to the last day of the 36th month following the month of the flight or transaction date. In addition, if a JMB member does not accumulate mileage within 36 months after becoming a member, or a JMB member's account remains inactive at zero mileage for a consecutive 36-month period, JAL may withdraw or cancel the membership of such member.[15][17]

The Fly On Programme is the frequent flyer service status programme and is divided into four membership levels, Crystal, Sapphire, JGC Premier and Diamond, based on the member's travel in the last calendar year. Additionally, a minimum of four JAL Group flights on eligible fare classes are required. Members earn Fly On points on eligible fare classes on JAL Group and Oneworld member airlines. These are used to calculate the member's eligibility for membership renewal, upgrade or downgrade during the membership year. Higher-tiered members are provided with increased travel benefits such as bonus mileage, additional baggage allowance, priority boarding and airport lounge access. There are two phases to the Fly On Programme service benefits; one begins after two months following qualification for membership and the other begins from April of the following year. Membership is valid until 31 March of the second year following membership qualification.[18][19]

Sapphire level is achieved or retained when the member earns 50,000 Fly On Points (includes 25,000 Fly On Points earned by JAL Group airline flights) or boarding more than 50 flights and minimum of 15,000 Fly On Points. Additional services and benefits for Sapphire members after two months of membership qualification include 100 percent bonus mileage, JAL or Sakura Lounge access with one guest when flying on JAL Group airline flights. Priority check-in at First Class counters for international flights and JGC counters for Japan domestic flights, priority baggage, 20 kg (44 lb) or one piece of extra baggage allowance and access to JAL Fast Security Lane. JMB Sapphire members will be invited to join the JGC, which is dedicated to cater for experienced travelers. JMB Sapphire membership level is equivalent to Oneworld Sapphire tier status, which entitles members to Oneworld Sapphire benefits when travelling on a Oneworld member airline.[21][22] 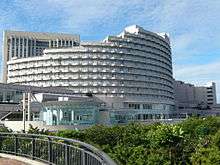 Hotel Nikko Tokyo, part of the Fly On rewards programme

JGC Premier is achieved or retained when the member earns 80,000 Fly On Points (includes 40,000 Fly On Points earned by JAL Group airline flights) or boarding more than 80 flights and minimum of 25,000 Fly On Points. Additional services and benefits for JGC Premier members after two months of membership qualification include mileage expiry suspension during membership period, First Class and Diamond / Premier Lounge access with one guest when flying on JAL Group airline flights, and priority check-in at First Class counters and priority boarding for both international and domestic flights. JGC Premier membership level is equivalent to Oneworld Emerald tier status, which entitles members to Oneworld Emerald benefits when travelling on a Oneworld member airline.[21][23]

The highest membership level in the Fly On Programme of the JAL Mileage Bank. Diamond level is achieved or retained when the member earns 100,000 Fly On Points (includes 50,000 Fly On Points earned by JAL Group airline flights) or boarding more than 120 flights and minimum of 35,000 Fly On Points. Additional services and benefits for Diamond members after two months of membership qualification include 125 percent bonus mileage and any seat award tickets with double mileage deduction. JMB Diamond membership level is equivalent to Oneworld Emerald tier status, which entitles members to Oneworld Emerald benefits when travelling on a Oneworld member airline.[21][24]

The JAL Global Club is an exclusive club dedicated to catering to JAL Group's most experienced and valuable travelers. Membership is available to JMB members who have earned 50,000 Fly On Points or boarding more than 50 flights and minimum of 15,000 Fly On Points. In addition, membership can be enrolled under JALCARD Club-A, Club-A Gold or JAL's Diners Club membership after payment of an annual fee. Lifetime membership will be given as long as a one-time qualifying member continues to pay the JALCARD annual fee. The Oneworld tier status as a JGC member will depend on the JMB Fly On programme membership levels, with the following exception: JGC members will automatically attain Oneworld Sapphire status upon enrollment, regardless of the number of FLY ON Points accumulated in the previous calendar year.[25][26]