First class is a product class, available on some passenger airliners, intended to be more luxurious than business class, premium economy, or economy class. In general, first class is the highest class offered.

On a jet airliner, the first class cabin usually has a limited number of seats—rarely more than 20. The cabin is typically found at the front of the aircraft, offering increased space, comfort, service and privacy.

Historically, propeller airliners often had first class in the rear, away from the noise of the rotating propeller.

The services offered to first class passengers can be endless. From amazing food, comfort, and great lounges, traveling first class is truly a dream come true.

First class passengers traveling via aircraft have special lounges within the airport to wait in before entering a flight. These lounges contain good food and a peaceful environment. When boarding time arrives, specific airlines even make arrangements for limousines to take first class passengers to their plane. After boarding the plane, each passenger gets escorted to their seat. Their seat would typically include a large tv, mini bar, cushioning, and tons of leg space. The seat may also extend to a bed, providing a comfy experience for passengers. Specific airlines also contain special bathrooms with showers and lots of extra space.

On most flights within or between the United States (including Alaska but not Hawaii), Canada, Mexico and the Caribbean - what is normally regarded as regional business class or premium economy in the rest of the world is branded as "domestic first class" by US airlines or "Executive Class" by Air Canada. The service is generally a step below long haul international business class. US territories in the Western Pacific (Guam and the CNMI) and sometimes Hawaii are considered international for service purposes and generally feature long haul business class.

However, domestic first class does have two very different meanings on certain transcontinental routes between New York City and California. Delta Airlines, American Airlines, United Airlines, and JetBlue operate a special service on flights between John F. Kennedy International Airport and San Francisco International Airport or Los Angeles International Airport known as "Delta Transcontinental Service," "American flagship service", "United p.s." (p.s. stands for premium service), and "Mint," respectively, with Delta and United using specially configured Boeing 757-200s and American and JetBlue using Airbus A321s. In the cases of American and JetBlue, first class is actually a three-cabin first class which is different from two-cabin first class, both in comfort and price (such as lie flat seats in first class, for example). In these cases, domestic business class is generally slightly higher than a two-cabin domestic first class ticket. The three-cabin first class is more of a true first class rather than a rebranded business class. On JetBlue, however, first class is only offered on transcontinental flights (and on some seasonal flights to the Caribbean), consisting of mini suites or lie-flat seats.

US discount carriers (such as Southwest Airlines, Frontier Airlines, Allegiant Air, and Spirit Airlines) do not have first class cabins, instead opting for an all economy layout, sometimes with a few select rows with extra legroom (such as bulkhead and emergency row seats) available for a nominal fee.

During the 1980s European first class was largely phased out in favour of 6-abreast seating throughout the aircraft, with variable numbers of seats allocated to business class (the business class cabin often being marked with a moveable divider).[1] This allowed greater flexibility for the airlines, allowing them to allocate differing amounts of premium seating depending on the route. Turkish Airlines are one of the few European airlines still offering 4-abreast seating in their premium intra-Europe cabins, but they're sold as business class seats rather than first class.[4] Same situation is in Russia onboard Aeroflot - Russian Airlines intra-Europe flights. 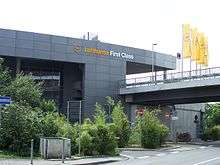 On the ground, first-class passengers usually have special check-in and security zones at the airport. Some airlines operate private first-class terminals and/or offer international first class passengers complimentary limousine rides to the airport. While it is typical that these passengers have lounge access, some airlines have separate lounges for first and business where the former may have more luxurious amenities. These passengers can often board the aircraft before other passengers, sometimes through their own jetbridge. 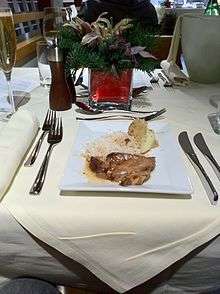 Meal in a first class airport lounge in JFK Airport, prior to departure

Alcoholic and non-alcoholic drinks are complimentary and gourmet meals are usually served with a choice of wine, dessert, and aperitifs. Often these meals have been designed by leading chefs and are served on white linen table cloths and with real cutlery.

When it comes to mileage, revenue first-class passengers are entitled to more bonus miles which can make the earning of a free ticket and other perks (such as a higher tier on a frequent flyer programme) much faster.

First Class tickets tend to be very expensive and only affordable to the very wealthy. On some airlines, the pricing of first class seats can extend up to $20,000. Traveling first class in trains are typically less expensive, but expensive. However, when compared to the benefits of traveling first class, the amount paid seems worth it to many people

The exact name for first class may vary between operators. Many airlines brand their highest level of international service as "First Class", although some carriers attempt to be distinctive. This list does not include international premium products that are a combination of first and business class, nor does it include regional business class offerings on US domestic and North American routes branded as "First Class". 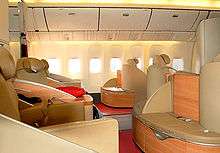 Several airlines abandoned their First Class cabins for various reasons over the past decades: