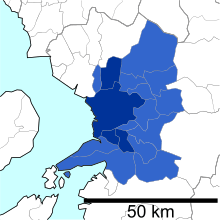 Kumamoto (熊本市, Kumamoto-shi) is the capital city of Kumamoto Prefecture on the island of Kyushu, Japan.

Greater Kumamoto (熊本都市圏) had a population of 1,460,000, as of the 2000 census. As of 2010, Kumamoto Metropolitan Employment Area has a GDP of US$39.8 billion.[3][4] It is not considered part of the Fukuoka–Kitakyushu metropolitan area, despite their shared border. The city was designated on April 1, 2012 by government ordinance.

Katō Kiyomasa, a contemporary of Toyotomi Hideyoshi, was made daimyo of half of the (old) administrative region of Higo in 1588. After that, Kiyomasa built Kumamoto Castle. Due to its many innovative defensive designs, Kumamoto Castle was considered impregnable, and Kiyomasa enjoyed a reputation as one of the finest castle-builders in Japanese history. After Kiyomasa died in 1611, his son, Tadahiro, succeeded him, but Tadahiro was removed by Tokugawa Iemitsu in 1632, replacing him with the Hosokawa clan.

The current administrative body of the City of Kumamoto was founded on April 1, 1889.

Near the end of World War II, Kumamto experienced several air raids, and the greatest one on the night of June 30 to July 1, 1945. About one third of the city was burned, and more than 300 people died.

On February 1, 1991, the towns of Akita, Kawachi, Tenmei and Hokubu (all from Hōtaku District) were merged into Kumamoto.

On October 6, 2008, the town of Tomiai (from Shimomashiki District) was merged into Kumamoto.

On March 23, 2010, the town of Jōnan (also from Shimomashiki District); and the town of Ueki (from Kamoto District) were merged into Kumamoto.[5]

Kumamoto has a humid subtropical climate (Köppen climate classification Cfa) with hot summers and cool winters. Precipitation is significant throughout the year, but is much heavier around the summer, especially the months of June and July.

The city's most famous landmark is Kumamoto Castle, a large and, in its day, extremely well fortified Japanese castle. The donjon (castle central keep) is a concrete reconstruction built in the 1970s, but several ancillary wooden buildings remain of the original castle, which was assaulted during the Satsuma Rebellion and sacked and burned after a 53-day siege. It was during this time that the tradition of eating basashi (raw horse meat) originated. Basashi remains popular in Kumamoto and, to a lesser extent, elsewhere in Japan, though these days it is usually considered a delicacy.

Within the outer walls of Kumamoto Castle is the Hosokawa Gyobu-tei, the former residence of the Higo daimyo. This traditional wooden mansion has a fine Japanese garden located on its grounds.

Miyamoto Musashi lived the last part of his life in Kumamoto. His tomb and the cave where he resided during his final years (known as Reigandō, or "spirit rock cave") is situated close by. He penned the famous Go Rin no Sho (The Book of Five Rings) whilst living here.

Suizenji Park is also home to the Suizenji Municipal Stadium, where the city's football team, Roasso Kumamoto used to play regularly, but nowadays they use the larger KKWing Stadium in Higashi Ward.

The downtown area has a commercial district centred on two shopping arcades, the Shimotori and Kamitori, which extend for several city blocks. The main department stores are located here along with a vast number of smaller retailers, restaurants, and bars. Many local festivals are held in or near the arcades.

Kumamoto has a prefectural mascot, "Kumamon". Kumamon is a black bear with red cheeks.[9]

Kazufumi Ōnishi has been the city's mayor since December 2014.[10] 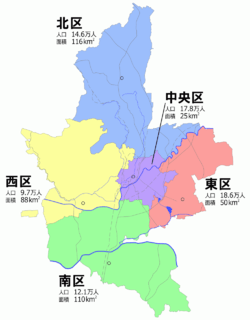 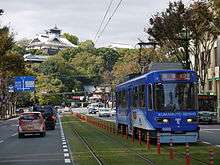 Kumamoto Airport is located in nearby Mashiki.

There is a local football club Roasso Kumamoto in J.League.

The Kumamoto Castle Marathon is a yearly event in Kumamoto City. It was established in commemoration of Kumamoto becoming a designated city in 2012.[11] The 1997 World Men's Handball Championship was also played in town.

Kumamoto City is twinned with the following cities.