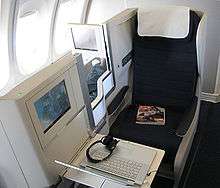 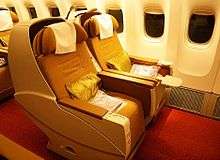 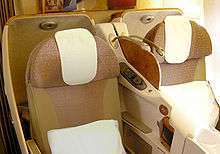 Business class is a travel class available on many commercial airlines and rail lines, known by brand names which vary by airline or rail company. In the airline industry, it was originally intended as an intermediate level of service between economy class and first class, but many airlines now offer business class as the highest level of service, having eliminated first class seating.[1] Business class is distinguished from other travel classes by the quality of seating, food, drinks, ground service and other amenities. In commercial aviation, full business class is usually denoted 'J' or 'C' with schedule flexibility, but can be many other letters depending on circumstances.[2][3][4]

Airlines began separating full-fare and discounted economy class passengers in the late 1970s. In 1976, KLM introduced a Full Fare Facilities (FFF) service for its full fare economy class passengers, which allowed them to sit at the front of the economy cabin immediately behind first class, and this concept was quickly copied by several other airlines including Air Canada.[5] Both United Airlines and Trans World Airlines experimented with a similar three-class concept in 1978, but abandoned it due to negative reactions from discount economy class travelers who felt that amenities were being taken away from them.[6] United also cited the difficulty of tracking which passengers should be seated in which section of the economy cabin on connecting flights.[7] American Airlines also began separating full-fare economy passengers from discounted economy passengers in 1978, and offered open middle seats for full-fare passengers.[8]

Around this time, there was speculation in the airline industry that supersonic aircraft would corner the market for the highest-paying premium passengers, and that a three-class market would emerge consisting of supersonic first class and subsonic business and economy classes.[5] In 1977, El Al announced plans to reconfigure its aircraft with a small first class cabin and larger business class cabin on the assumption that most transatlantic first-class passengers would shift their business to the Concorde.[9]

British Airways introduced "Club Class," a separate premium cabin with numerous amenities, in October 1978 under CEO Colin Marshall as a means of further distinguishing full-fare business travelers from tourists flying on discounted fares.[10] Pan Am announced that it would introduce "Clipper Class" in July 1978,[11] and both Air France and Pan Am introduced business class in November 1978.[12] Qantas claims to have launched the world's first Business Class in 1979.[13]

Both Qantas and Virgin Australia offer Business Class on their domestic networks as well as on trans-Tasman flights to New Zealand. Flights between Perth and Sydney typically feature lie-flat seats, with deep recline cradle seats on other routes.

On the other hand, Air New Zealand does not offer Business Class on its domestic network. Business Class is available on flights between New Zealand, Australia and the Pacific Islands when operated by a Boeing 767-300, Boeing 777-200, Boeing 777-300 or Boeing 787-9. The 777s and 787 have lie-flat seats, while the 767 has recliner seats.

Air Canada calls its domestic business class product "executive class", which evolved from a premium economy "Connoisseur Class" that was available for full fare paying economy passengers, essentially a guarantee of a vacant adjacent seat if possible and free alcohol service. Business seats in Air Canada Regional are wider with less seat density in the forward cabin. While regional planes are not as stand out some domestic flights, for example Toronto to Vancouver have fully lie back seats on the 777 and 787 as well as 767 (767 fly regional too).

In the United States, true business class is usually only offered on transcontinental flights (and even then typically only on premium routes between New York-JFK and Los Angeles or San Francisco) and flights from the East Coast to Hawaii. US carriers generally designate "first class" as the front cabin on other domestic two-cabin aircraft.

European carriers generally offer a "business class" consisting of enhanced economy seating with better service. There may be a curtain to separate business from economy class, based on demand, but the seats are in the same cabin. Some airlines such as Air France and Lufthansa use convertible seats that seat three people across in economy, or adjust with a lever to become two seats with a half seat length between them for business class use.

Business class has started to disappear from some short/medium haul routes, to be replaced with full fare economy and discount economy (KLM and SAS). On these routes, the seats are the same for all passengers, only the flexibility of the ticket and the food and beverage service differs. On shorter routes (typically less than one hour) many airlines have removed business class entirely (e.g. BMI on many routes) and offer only one class of service. British Airways offers "UK Business" on their domestic system, offering the same service as Economy with the addition of expedited check-in, baggage reclaim, lounge access and priority boarding. In flight drink, tea or coffee and a snack are served to all customers, with a Hot breakfast on flights prior to 9.29am.

Most low-cost carriers, such as Ryanair and Easyjet in Europe, Tiger Airways in Australia, Southwest Airlines in the United States, and even some national carriers such as Aer Lingus and Air New Zealand on their domestic and regional networks do not offer any premium classes of service. Some, however, have options above a standard coach seat: 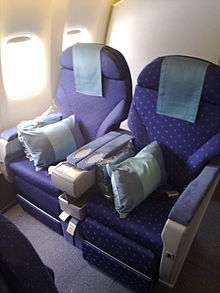 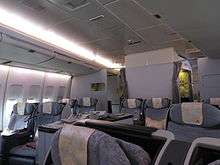 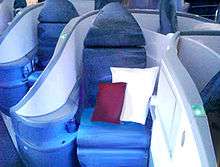 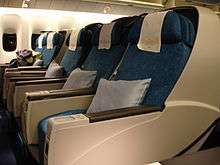 Pakistan International Airlines Business Plus+ Class on the Boeing 777-300ER

While flying on a long haul business class flight, airlines such as Swiss, Lufthansa, SAS Scandinavian Airlines, and many more offer in-flight gourmet meals with a choice of entree. Once one sits in one's seat, one is presented with a choice of champagne or water, with a 3 - 5 course meal to follow during the flight. Some airlines, such as Singapore Airlines, allow travelers to request specific meals not on the regular menu prior to the flight. The bar choices for the business class cabin are generous, with airlines offering different premium wines, and an assortment of beers and liqueurs.[18]

The exact name for business class may vary between operators. Bold text indicates airlines for which business class is the highest class of service offered.

Until June 2009, Via Rail in Canada premium class service was called "Via 1", on short range routes oriented towards business travel. The premium service on the transcontinental route (The Canadian) is called "Silver & Blue". In June 2009, "Via 1" was renamed "Business Class" and "Silver & Blue" (The Canadian) and "Easterly" (The Ocean) were renamed "Sleeper Touring Class" and "Totem" (The Skeena) was renamed "Touring Class".